Our third newspost after over a week of silence and bringing 2 new preview screenshots!

It's been a while since our last newspost, but don't worry, we're still active!

Most important things I have to tell is that Nauz is working on the animations of the Skull grenade and are probably gonna be done soon, the skull grenade is gonna replace the default half life 2 grenade and it's scary eyes will be sure to warn you it's coming to keel youuu.

here are some preview screenshots that were also uploaded to our images section: 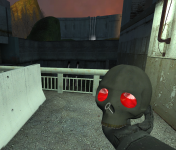 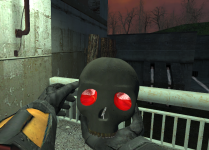 We're recruiting a experienced coder/programmer that knows the C++ language, no Source engine experience is required however and I myself will get you up to speed on what I've learned so far if you choose to join the team.

We encourage enslavement especially of Polish people like Alt'... just kidding!
though Alt' does seem to consider himself treated like a slave now and then, poor thing! sometimes I'm feeling crazy enough to give him a e-hug and cheer him up.

We don't have a deadline so most of so far have been working in our own pace and usually play games in the evenings and sometimes earlier if we get to stressed out.

So take a look around our ModDB page and if you're interested then contact me by clicking Send Message in the profile window of our ModDB page.

nice to hear from you guys.
keep making us sum nice nadez^^