Forsaken Bastion's Fall (FBF) is a map that combines Tower Defense gameplay with an AoS-like Hero PvP Battle. Our project started in 2008, when it was known as Defense of the Undead (DotU). As time went on, ideas, criticizing, and suggestions reshaped DotU into a whole new map which was then completely remade from scratch to become what it is now. FBF is set in a completely new universe with an extensive lore that keeps growing as time goes by. It is set in a key point of the World's history: At the very end of a long war that present many great changes at social, political and religious levels. The players can choose from 2 teams and 5 different factions. The Forsaken, an ancient cult of necromancers and it's undead army, have to defend their last fortress from The Alliance (The Infidel), a coalition of human nations using their last resources to take down the Forsaken. There is a total of 5 factions, 27 heroes, 104 items (8 base items and 24 items unique to each faction), 27 minion 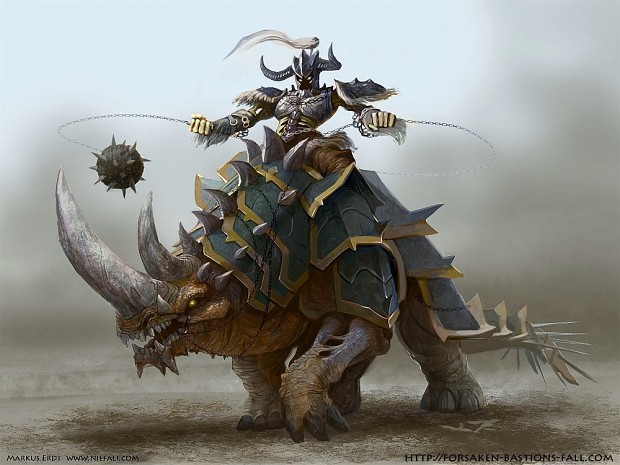 A really awesome Fanart of our Hero "Behemoth" made by "Markus Erdt"
from Me-artbook.blogspot.de