Third person horror adventure designed for Half-Life 2. No weapons, no fighting. Only means of survival is to run or sneak past the monsters.

Hello, So I promised to Flesh´s fans that I´d release the plans and documentations on it. Sort of a making-of-Flesh. This is pretty much all of it. All that there ever was. The way I made Flesh is... most of the ideas were just in my head, and I never did have an definitive idea of what the game is. It just shaped itself. So most of my notes and pieces of texts here are just insane ramblings and small notes I´ve had to write down on notepad, so I can print them on paper and remember them. And a few MSN conversations with Jesse. Im really surprised if anyone actually reads thru those. Just as insane as Blair is with his ramblings, so am I with my mod work. So yea, some people will find this tedious and boring, and others will find it a golden treasure. Just like Flesh itself. ´till next time -Henri Tervapuro 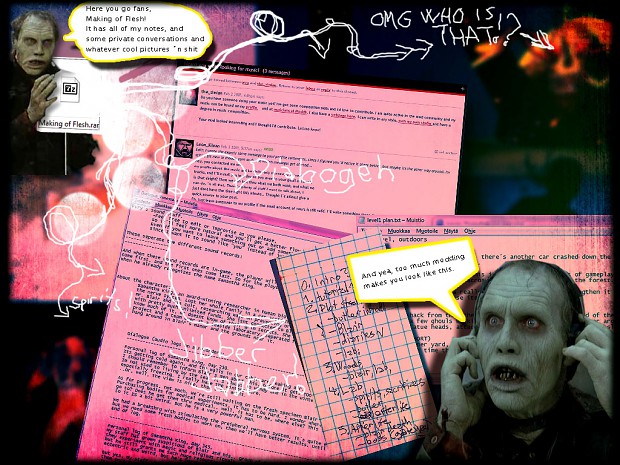 This should be pretty interesting

And the Bub pics made me lol

Woot! This will be cool!

The final boss fight you had in mind in the past was just absolutely epic, it looked scary too, those massive legs disappearing into the fog.

Yeh the story behind that is, it looked really nice, but it was really hard to interact with a monster that large.. so I skipped that idea. Probably the wrong mod for that sort of a boss fight.

Thanks for uploading this henri :) You're a talent, and a pleasure to work with.