Endlessly roaming through the Space, an alien fleet is closing to a blue planet. Its inhabitants, blissfully unaware of the upcoming threat, are struggling with the chaos they have to face everyday. And yet, it will all soon change. The world will finally become united against a common enemy. The Earth will never be the same anymore. But what will this war bring? Do the humans stand any chance against such a foe? Will everyone willingly join to fight the alien thread? And why, do the aliens seem to look so human-like?... 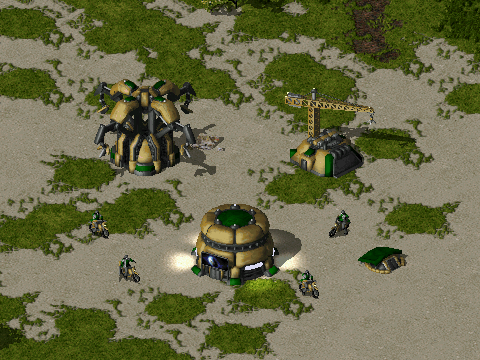 I take it the motorcycle repair thing works like a TS hospital and bike infantry use cyborg logic to lose their bikes when damaged?

There is a chance bike infantry survives without a bike instead of dying. It's completely separate from the cyborg logic.

The building also works differently than the TS hospital. Infantry just needs to get near it to restore a bike.

The circle building totally looks like pudding..
You're doing these designs on purpose aren't you v:

And that small one on the right is a salad sandwich? :v

Repair Station provides repairs to nearby vehicles. Repairing units in combat is ill-advised, as it will make them more vulnerable to damage.

Charon Network Node expands the main tunnels of the Charon Network, allowing new structures to be placed nearby. However, unlike the Armory itself, it cannot manufacture anything on its own.

Safeguard is a defensive structure that functions as an observation and defense post. As it's supposed to not only provide situational awareness for Essence forces, but also mark their presence and improve human morale in the area, it is also used to incorporate locals into Raider squads.

All of these become available after adding a specific upgrade to an Armory.