A Source Mod called "Dead West". This mod is primarily a first person zombie shooter running on the source engine and based on HL2. It is going to play in the Wild West ofcource. A few real cowboys against Indian-zombie's :P These tough guys really like some fire power, and so the dubble barrel is there again, also with the good old lever-action rifle and some real wild west revolvers(and that's not all of the guns ofcource). All in all a dusty, wild-west, first-person zombie shooter. 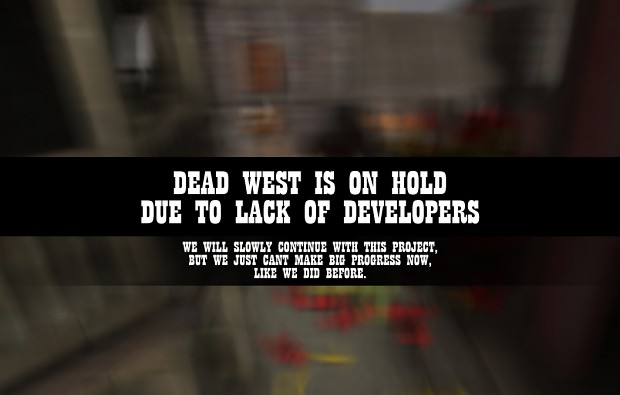 Who do you need to keep the mod going?
Post a "help wanted" news post or something.

one of the last news items already told. Animators, coders, models. We can use any help here.

u just got a coder cmon!

our coder is way to busy with other things right now

I'll have some prefabs to show you this weekend bigD, keep your hopes up everybody!

Nooo, this was so amazing !

We are still progressing mapping, modeling and character design. But we need a animator to get us to the alpha.

Well i hope you find some helpers soon, Don't die on us comrade!!!! :D

We will finish this (somehow)(in some time) :)

You guys deserve better.
Too bad you guys aren't getting the support you guys need.
I wish you guys the best,and hope you get your animators.

We will definitely continue with this project, there is now only too little support.