This is a MOD for Command Conquer:Zero Hour, We are ready reference Generals 2 (FTP) model to create a new model of buildings and units, the number of units of each faction to prevail Zero Hour, the unit will differ from nature (such as the Hummer into infantry units), the total number of units unchanged. Game camp for "Asian-Pacific Allance (APA), European Union (EU), Global Liberation Army (GLA)", each camp administered three generals, in accordance with general reference to Generals 2 specialty condemnation .

1.5 is the general subfaction version, total of 12 generals (three base camps of traditional general +9 sub-camp of General)

1. The need to support the original Zero Hour
2. Include general 2MOD
3. Including HD trees

Installation Instructions:
Copy all the files into a clean version of Zero Hour v1.04 root directory. 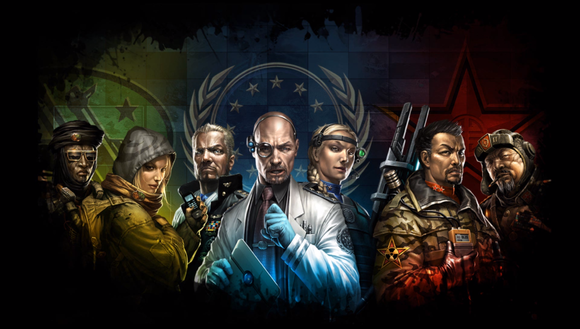 I wonder what new with this mod version :P

Never mind i try it would said impressive
what new i found out more available general and the fight no FPS drop even play on laptop i'm impress :)

1.5 is the general subfaction version, total of 12 generals (three base camps of traditional general +9 sub-camp of General)

hey Did you saw The Generals that Victory Games were Planning on Releasing before the game got Cancelled? Muerta and Salvo GLA Horde General and EU Artillery General are you gonna be them?

Sorry，Zero Hour just has 15AI factions that could play in the game，we can't add more general.

Maybe more in other versions then. :)

hey i just got it and...i think im missing some stuff....
like i dont see the battlemasters or some of the abilitys i get...whats wrong??

So good, thanks! Can you add sweetFX/ enb?

is there torrent link

Why do you need torrent link?

that guy in the middle reminds me walter white o.O

how do you start this up

Nice job with the mod, looks set to be a pretty awesome one once the bugs and what-nots have been addressed. I do have some bug reports and suggestions to offer with regards to improving the mod (though I'm pretty sure you guys know some of the things that need to be addressed, better than I do). It might be pretty long, so I thought if it's OK if I could email my comments to you :)

frank-zhu1004@hotmail.com
you can send this to me.

Is it higher resolution?

Dat Graphics.. Hoping to enjoy this one.. Downloading right now.

Im kinda new to this what do i need to play ? i have to download just the mod or i need the zero hour 1 installed?

you need Zero Hour to install this

Works with origin maybe??? Anyone care to answer> I would greatly appreciate

does this work with mac? if not will u be making a mac version?

hey Did you saw The Generals that Victory Games were Planning on Releasing Muerta and Salvo GLA Horde General and EU Artillery General are you gonna be them?

Cool, keep it up

Writes insert CD. What is the problem?

can i play campaign???

Later perhaps. This mod is too new to have any campaign.

It would surprise me if there was any campaign in a mod which has just been started. Let them finish the work with the factions first.

I hope you can solve these bug and provide an updated version soon :-) Thanks for your work

Units skins are good, especially when compared to generals 1, where the infantry had some kind of 'tubes'in their hands nicknamed weapons. Unfortunatelly I dislike the concept a bit. I don't know what is planned for this mod, and sorry if I'm too quick to judge this.
In cnc ZH (and cnc3 KW) the subfactions are centralized around a standard (st. later) faction. The st. and the sub factions have lots of units they share, they're almost the same, except when a sub faction is compared to the st. one we can see that the sub one has something missing and also has something the st. does not have = special units, abilities, techs which are not shared with other generals. You all know that, I've just composed it.
VG's Generals 2 was meant to be free to play It was first meant to be "boxed" version, but at the early stage of the development came out the news it is going to be f2p - according to one of the devs who wrote testaments on the forum, it was due to a budget cut, and the f2p was the "best you could've hoped for". f2p or nothing. I'd personally choose the f2p over nothing.
F2p games must have a lot of content released even after the release of the game to keep the players there - unlike a boxed version where you pay once and good bye. This resulted in the numerous generals in Gen2. In Gen 2 the factions weren't centralized around the so-called 'classic generals', they were just the generals you start with the game. Now the most important sentence here: All units except a very few are shared by at least one other general, leading to not having (much) special units, rather than a unique lineup. Let us see EU.(Game version: When the game got cancelled aka "early October patch(2013)) We had classic, railgun, experimental weapons, recon, rapid assault and air force generals. How many unique units we had here? If my memory does not lie 4! APC (I'll explain), Heavy assault laser ( aka "laser tank"), Railgun tank, and the Experimental railgun tank. And a special general power. (there were passive unique abilities implemented, I'll show you a link later.)
I know that the modders want to keep the same amount of units, so if they add some or modify the generals it won't be a problem. Just a little reminder.

'Bulldog' - classic general. (I can only remember the units of each faction, but unsure about the tech tree, or upgrades - If it is needed I could rewatch some videos on Youtube)
Infantry - Recon, AT, From advanced barracks: Rail gun troops, and fire support team. A lot of EU generals have more types of infantry than vehicles.
Vehicles - APC (infantry can shoot out only after an upgrade - internal suppression or something like that; Has healing/repair stuff), Aegis tanks (a medium tank, nothing fascinating), and Longbow (a AA/AT rocket vehicle, capable of detecting stealth). Summary: mediocre selection of vehicles.
Air - Phantom (a stealth AA/Air-surface rocket armed helicopter) and Valkyre (heavy ground support - EU had this for late game.)

Recon squad: everyone except: Cutting edge, and Mercury Red.
Rocket squad: shared with Mercury Red, Air Force,
Railgun squad: shared with Ghost, M. Red, C. Edge, Cleaver.
Fire support team - "caster" unit, everyone had it.
APC - not confused with Assault APC. the previous one can heal the latter disable enemy vehicles. Only Bulldog had it (according to some information the Artillery general coming in the never released late October patch was going to have it too.)
Aegis - shared: Cutting edge(exp weapons), Cleaver (railgun) Ghost (recon), Mercury Red (rap. assault), Air force.
Longbow - Cut.edge, Cleaver, Ghost.
Valkyre: everyone except Cleaver
Phantom: shared with Ghost, AF, Cleaver.
(I usually don't count the commando, and the builder/harvester units)

Railgun general (I wont tell each one of them - except i you want it). Most vehicle oriented (In EU), lack early tech infantry, only the higher tier infantry are available.
Railgun squad (available as if it was a recon squad!), Fire support team.
Tanks: Fox LRV (shared with other 2),Assault APC(shared: Cutting edge, Mercury Red), Aegis, Longbow, Experimental Railgun tank (only this).
Phantom and Orca (a tougher than phantom, like phantom this is also AA/Anit-surface - Recon and Classic generals have it also).

I think after this you might get how VG solved putting in lots of generals while maintaining the diversity.

Youtube.com and interesting video what was planned for this game.

Some actual complains: The mod I believe went too far from Generals 2, while it bears its name. Units with new skin, but the same as in ZH. Add the helicopter Orca, (we'd have 3 as in Gen2), and make phantom weaker than it. I'd also have the 2 types of APCs if possible (some diversity for the factions). Buff the Railgun tank (A gattling tower almost killed it in 1v1 for me :/ )
Longbow is just an avanger with new skin.
Aircraft are good to have.

Air Force: War factory is perfect for them. IF you'd add Orcas, then this one should have all of the Airplanes/Helis (Take at least one away from every other). Barracks: It's also good.

Railgun General: It might have only the late tech infantry (so it will be more different), Biggest number of vehicles. This one is supposed to have OP tank force, so nerf her air force.

Experimental Weapons general: In VG's Gen2 it had somewhat less infantry, compared to most EU gens, and a little more tanks. When compared to Cleaver: still fewer vehicles and more infantry.

If you've had enough of me, please say it. I'll continue with APA and GLA only with permission :)
Sorry for the long post, but a lot of times I had a feeling most youtubers had less clue about the game than me who had not the opportunity to try the game!!! :D I studied it at least, but I of course I never thought that the game might end like this.

Lowbow is actually a both anti-tank\anti-air vehicle,especially EMP Longbow is a vehicle terminater.
I personally think Ocar is useless because we actually can't make Valkyrie into a long-range helio-artillery in zero hour.As result we just need one heavy helio——Valkyrie.

Why is it impossible? In Contra Mod, the Pavelow serves that same role with spotter APCs on the ground.

When I play, and a lot of troops on the map, the error takes off:---You have encountered a serious error. Serious errors can be caused by many things including viruses, overheated hardware and hardware that does not meet the minimum specifications for the game. Please visit the forums at www.generals.ea.com for suggested courses of action or consult your manual for Technical Support contact information.

iv been geting alot of crashes with this mod.....=[