The year is 1999. The government has unveiled the technology that for fifty years had been kept secret since the crash at Roswell, New Mexico. In another fifty years, man will live in a world that is completely automated and populated by robotic assistance. Without warning, the technology that man created will turn against him... Some years later, a civilization is rebuilt by the humans surviving the brutal Mech Wars that threatened to exterminate them. As Lt Commander Joseph Hicks, you have been groomed for battle since birth. A decorated hero in the Mech Wars, you continue to serve the United Resistance Front, stationed at the Riker Containment Facility. Recently, a number of aliens have been captured, raising many questions amongst the scientific community here. Why were these aliens coming to Earth? What secrets were the URF commanders hiding?

CodeRED - Battle For Earth is a standalone 3D first person shooter crafted from the original source code of Quake II from id Software. 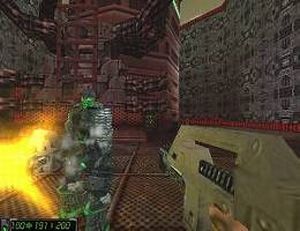 Is this related in any way with CodeRed:Alien Arena?

yeah iirc, it was made by the same guy (Irritant).
I think the battle for earth one was more singleplayer oriented tho.