Well my original plan of fixing the 1861 scenario for this version failed, but I fixed most of the cultures so at least I'm done with half of the work. I'm not sure whats coming next, maybe the fixed scenario will be part of the 1.0 version. Anyway, here are some of the changes and new additions:

While I was testing I noticed most of the vanilla events cost ridicously low amount of money. The Hamburg Fire event only costed £100 for example. Good examples of the new changes are the Olympics and World Fair events. Only hosting the first Olympics costed money. I changed that so the cost increases over time. 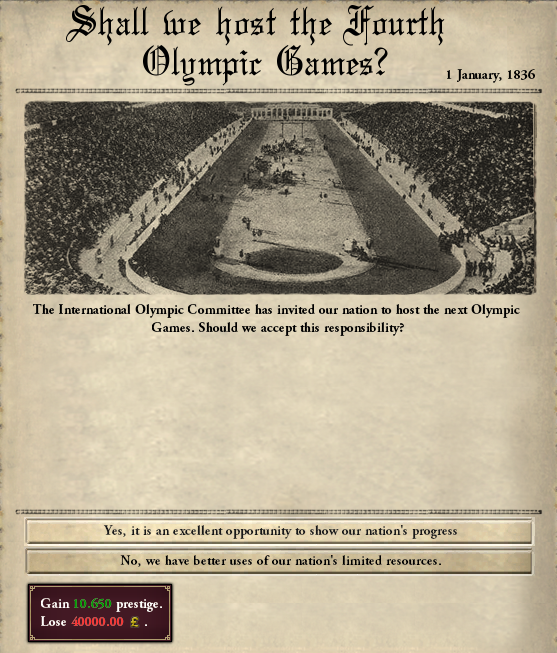 Here is the 4th Olympic Games event for example

I decided to go through all of the vanilla events and found other issues. Most noticeable was the Prussian Constitutionalism government type missing from some event triggers. Seems like Paradox made those events before they added it and just forgot to fix them. Some events never fired because of the changes of the mod. For example in every NNM based mod, Norway starts as a vassal of Sweden, unlike vanilla where the country is part of Sweden so hopefully most of these events got fixed. But the most important change is the improved nationalist movement events. These events are about non primary or accepted pops and their struggle for rights or independence. However, some of the effects applied to every pop in the province or the region, not just the non accepted which made no sense. 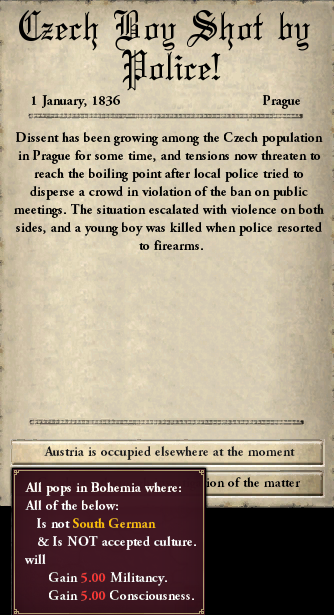 One of my friends asked me to make an event for the CSA about resettling blacks in Africa after slavery is outlawed, but I also made it available for the USA, since Lincoln himself supported the ACS's plan for a while. I added an option to force them out for roleplaying reasons, but it won't be cheap and infamy free. 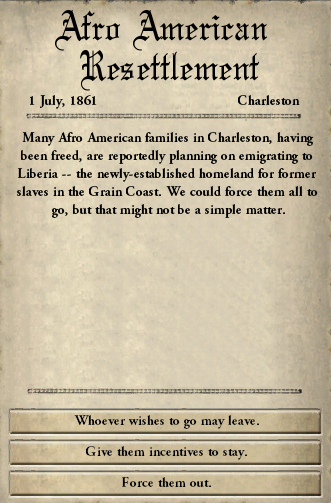 Here is a province event about the resettlement

I decided to add and rework some parts of another great minimod called Dutch(-Indies) Improvement Mod, made by crownsteler. These events are mostly about the colonial policy of the Dutch East Indies, with some political and cultural events. 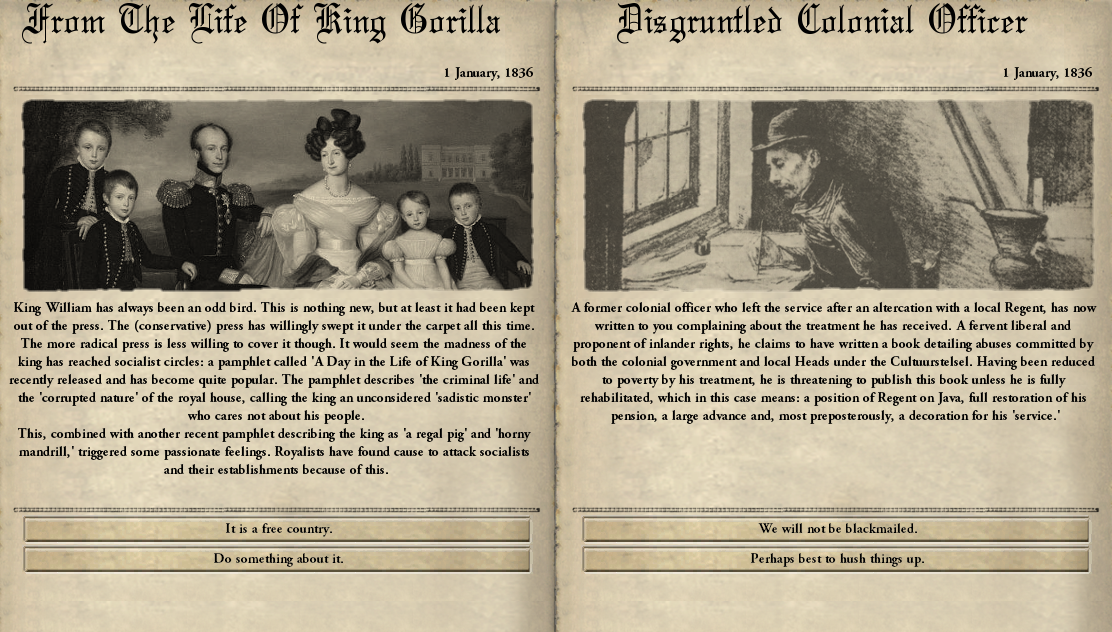 Chile is one of the most important countries in South America yet pretty much the only events it has are about the colonization of Patagonia. Most South American countries have events related to political changes or dictators, so I made one about the Civil War of 1891. 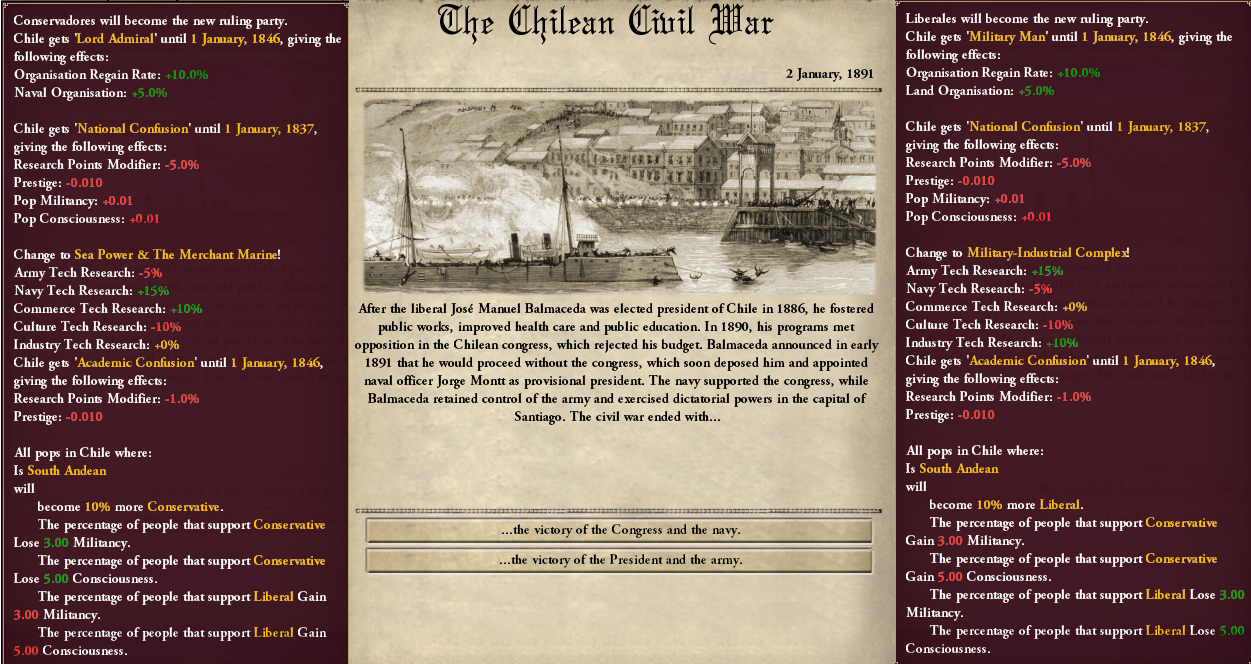 The possible outcomes of the civil war

Another important addition is the South American Dreadnought Race. It starts after a great power invented dreadnoughts but Brazil doesn't have the tech yet. 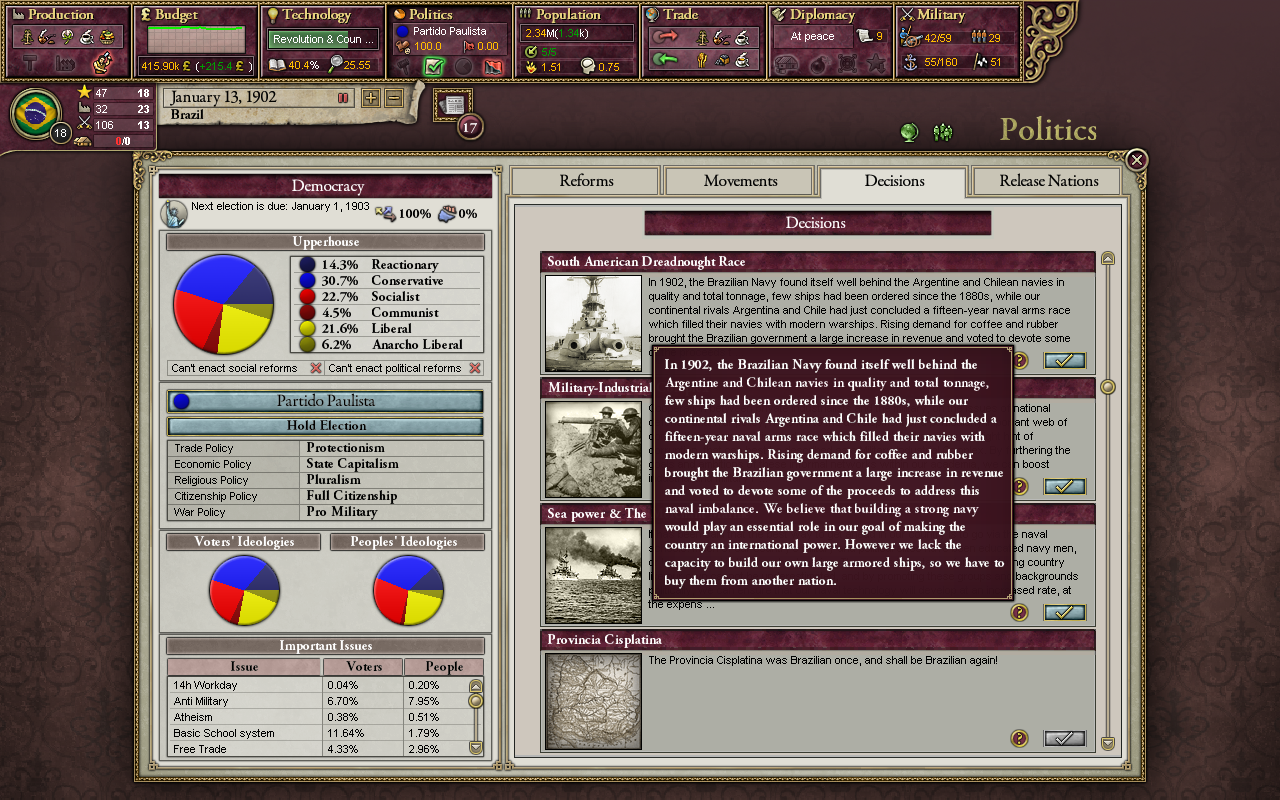 If the great power agrees to build the ship, the decision becomes available for Chile and Argentina too. For gameplay reasons, it's only one dreadnought though. I might make a generic decision for non GPs to order dreadnoughts or sell them to GPs in the future. 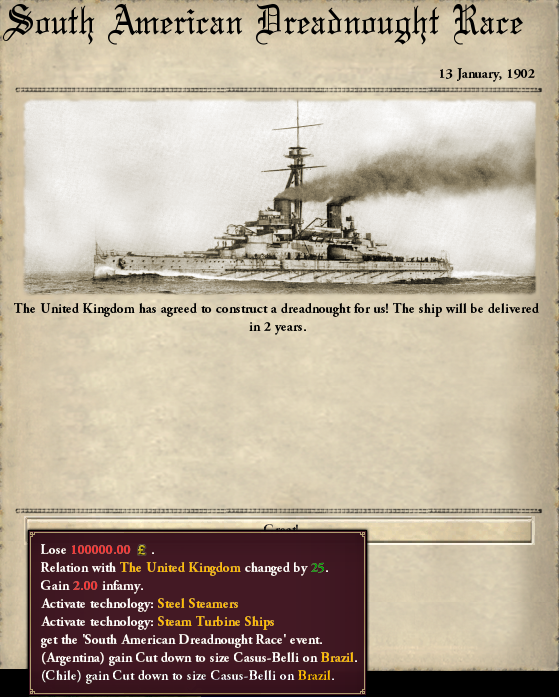 in 1864 Mexico need to be Call Empire of Mexico until 1867 House of Habsburg En.wikipedia.org

Hi, im trying the mod, have 2 questions, can you add textile factories based on wool? Otherwise that good is pretty much useless, plus it would be more realistic. have you changed the logic of migrations? Im seeing much early flow to Brasil, a slave state, and somehow, a huge amount to uruguay and almost none to argentina (even after abolishing slavery and becoming a republic)... in this last comparison i would imagine political reforms are acting, but still intrigued about brasil!

And a very important thing about germany, theres a problem that comes from vanilla version and remains always... its too weak, its population grows slowly compared to france, and its military is very small... plus, it should always count with the backing of UK, and about UK, its AI seems broken, it cant deploy its nuneroys troops through oceans! So its a useless ally and cant intervene anywhere, it often gets land invaded by france!

I have a proposal for Spain that i don’t Konw if IS implemented. But you can add a submarine of “Peral” event. IS The first submarine of the world, and was made with electric batteries. I invite you to search more information thanks.