Sent on a mysterious mission to a frigid wasteland, questions begin to arise. What are you looking for? What will you find? What price will you have to pay to know the truth?

This Halloween update will explain my progress with this mod. Also, there's a special map that anyone can play right now.

This mod is moving to Source SDK Base 2013. I decided to do this one day when I because especially annoyed at the Source Engine with its bugs and poorly designed entities. Now I can finally fix things the way I want them to be. And it'll allow people to play my mod without owning Episode 2. (I have several friends who own Portal as their only Source game.)

New entities so far include:
- Func_use. Due to the sheer amount of things to "use", the entity data limit for the map fills up quickly. This helps a bit by cutting out unneeded properties.
- Message_controller. One entity to control all the messages in a map, and there are many.
- Global_texturetoggle. Changes the texture frame of the caller, for the color changing buttons I have. So I can get rid of all the other env_texturetoggle entities, and there were many. Only disadvantage is that to change the frame from another entity that entity will have to FireUser1 on the button which will relay it to the toggle entity.

It's worth noting that I also made changes to existing entities. I reduced the graininess on env_projectedtexture, something very popular which looks great. (I should use shadow mapping more often.) I added an input to point_teleport which will update its position and angles to match the target entity (the player). That way I can take the player somewhere for a dream sequence and then teleport them back to the spot they were before.They are very simple but effective. The bug fixes I applied may be much more valuable though. 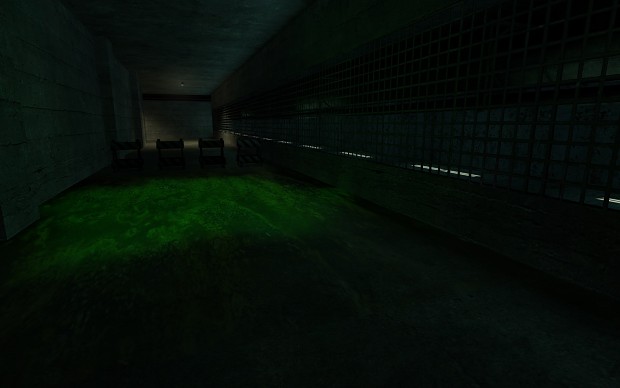 I am also taking the most popular request of adding more detail. Yes, I know I suck at this. Badly. It has always been a weak point of mine, and the problem is made even worse by the limited number of models and textures I have at my disposal. There are a lot of them, but few seem to fit my needs. Nevertheless I am doing all I can to spruce up those empty corridors and bare walls which are seen almost everywhere.

In the end, though, it won't live up to everyone's expectations. It's not going to be one of those masterpieces featured in magazines and praised by gaming websites. I want to please people but that's not my main priority. I want to impress myself, and I'm having fun and learning a lot. So my goal is achieved. A lot has changed since the beta release not long ago, but if you are expecting me to do a complete makeover of the mod then you might as well leave.

The main changes of level design this far have been this:
- Door frames. Someone suggested it to me, and it does look nicer now.
- Breakable surfaces. In a few places these work better than the windows that just disappeared when they broke.
- Spotlights. I am getting rid of most of the remaining "light" entities. It's not realistic in my mod. This is almost all underground. Light comes from one place and shines on another place. It's not a big ball of light that shines everywhere. So overall some places will be dimmer, but it'll look much more realistic, plus dim areas add suspense.
- New puzzles! Yes I am adding a few more puzzles to make better use of these areas that sadly take me so long to map.

Progress is slow. It always has been, but as my health has been having trouble my work on projects has suffered greatly. Yesterday I sat down in front of Hammer for 2 hours and managed to move one wall to a place that looked better than before. I might have to take more breaks and work on fixing my own life before this project is finished. Thank you for your patience and useful advice. I can't promise a release date yet because that just never works, and I like to take breaks pretty often.

In the meantime I made a Halloween map that you should try out. Download here

(Spoiler to the maze is here.)

Interesting read. Does 2013 give you access to all the assets (models and textures) you were using in EP2?

It actually does. It's pretty amazing.

Below the Ice Half-Life 2
Related Games