In the A Dark Prophecy Campaign MOD, wich begins close to the ending years of the Clone Wars era, you'll live through the eyes and ears of a series of new characters, who will have their destinies revealed when a long forgotten secret of Palpatine is revealed, a new age in the known and unknown galaxies...

"A long time ago, long before the age of the New Order, Palpatine, during his crusade to become a Dark Lord of the Sith, stumbled with the fabulous legend of a Sith mystery never revealed... It was about a being above the balance of the Force, with powers beyound any man's dreams. With a power that would find no match in any galaxy. The one who tainted the force. The one who created the Dark Side... The Sith Paragon.
Years of untold sacrifice revealed, by the time of the Clone Wars, it's existance. At that time Palpatine really had something to fight for...".

This campaign will feature:
- 18 battles with more than 60 completelly new missions including new voices, sounds and cutscenes.
- More than 30 totally new craft, new surfaces and new planets, varing from waterworlds to lava spittings planets. It will also make use of some awesome models already out there.
- Atmospheric and underwater battles never seen in XWA before.

We've promissed... And here it is - XWA goes underwater!! 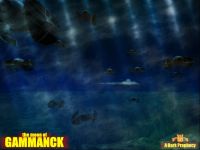 The moon Gammanck, an oceanic world orbiting the dead desert planet of Teway in the unknown Gammanckian Regions. The definately home of the tribal war-loving, hi-tech and amphibious Gammanckians. More info at the official site!

Grab it while it's hot!

Drumaga-class Guardian Fighter is out!

Here it is!! After some updates and some changes it is out thanks to teamwork! This one credits goes to: Concept: Mateus Borges/Kyle Model: Mateus Borges...

...everything were too quiet for too long...

After 3 months of hard work we have some news and 2 releases! This time is John Meyer's Armada-class Battleship Version 2.0... After been sleeping...

I'm proud to present EXO Trident's TIE Dart, the new generation of Imperial TIEs. More info and all the credits at the camapign's site...

The Official Troubleshooting Guide is now version 2.0. Thanks to Harrier Brayer's Guide to Font Repair all the fonts problems can now be corrected...

This mod has been deemed “dead” or inactive.
If this is your mod and you would like this reversed please, send me a pm and we will re activate the mod.

Give up hope on this one guys, it's never gonna be finished :(

I'll be back - with Schwarzeneger's voice

Well I've talked to Mateus a few days ago.
His computer crashed and he had lost some items, and real life has been a real henderance.
XWA mods takes lots of time due to the fact that RL can slow things down considerably.
Doing a complex model on XWA can take as long as 2-3 months depending on what's going on, the person's skill level, etc...
I belive he will get it done, but RL needs to stop destroying his computers :p.

is it stil alive?

Hey guys!
Check out the ADP forum and help us creating a great campaign! All info about the history can be found at the official site.

Yeah!! It's going to be really fun, lots of new underwater capable ships! ;)

Of course, thanks to General Trageton wich is creating a wonderful underwater environment!