Well howdy there, fellas. This is a basic reskin of the 33rd Regiment of Foot into the 56th Regiment of Foot, which bears the title of West Essex. This regiment is unique in that in 1764, the regimental facing was switched from a crimson red to pompadour purple. Nobody (Or maybe just me) is sure on why it was purple, however the troops often stated it was due to the color of Madame Pompadour's underwear.

Installation is fairly simple and straightforward, there's a readme file just in case you need it.

Hopefully you enjoy this addon and get some sort of use out of it.

Bunch of various information for the 56th Regiment of Foot 'West Essex' which was a British regiment formed in 1755 until, in 1881, was merged with the 44th Foot 'East Essex' to form the Essex Regiment under I believe it was the Childer's Reforms. Originally dubbed the 58th in 1755, it was nevertheless changed to the 56th. The 7 Years' War had a lot of various regimental formations and closures.

Here is an example of supposedly original 56th Foot lace, you can clearly see the purple stripe woven on the standard white lacing the British employed. In the near distant future I might update this due to the woven zig-zag pattern and the shaded folds where it turns at a 90 degree angle. Najecki has catalogued a great number of British lacings on his website, Najecki Reproductions 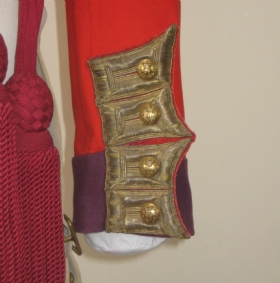 This authentic 56th tunic belonged to an officer named Morton Eden, who served during the Crimean War, while a little later than the Napoleonic period, you can clearly see I need to darken the regimental facing, perhaps not as much as this due to how the color may have changed with age, but still, a little darker would help. This image comes from the fantastic resource of boys who deal with original British items of the 18th and 19th century, The Military Gentleman 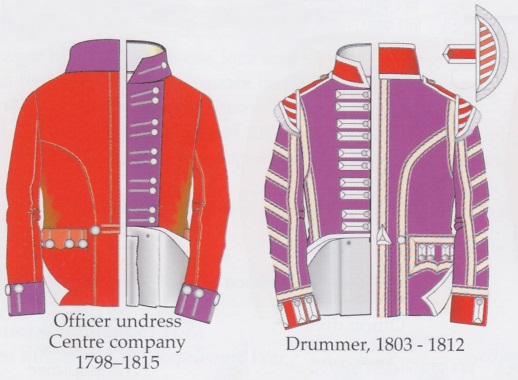 This came from a poster on a website (The Minatures Page) which username is dibble. Here we can see the regimental drummer jacket and an officer's coatee. Much like the Royal Clothing Warrant which states drummers (And various other musicians) would wear the opposite pattern colors. So, regimental facing for the jacket itself, standard red for the facings. The original source is from C.E. Franklin's book on British Napoleonic uniforms, many have questioned some of the contents of his book (Of course, one is bound to make mistakes regarding such a broad topic), yet I've never personally read his book. I'd ought to purchase it along with the very important Thin Red Line book. 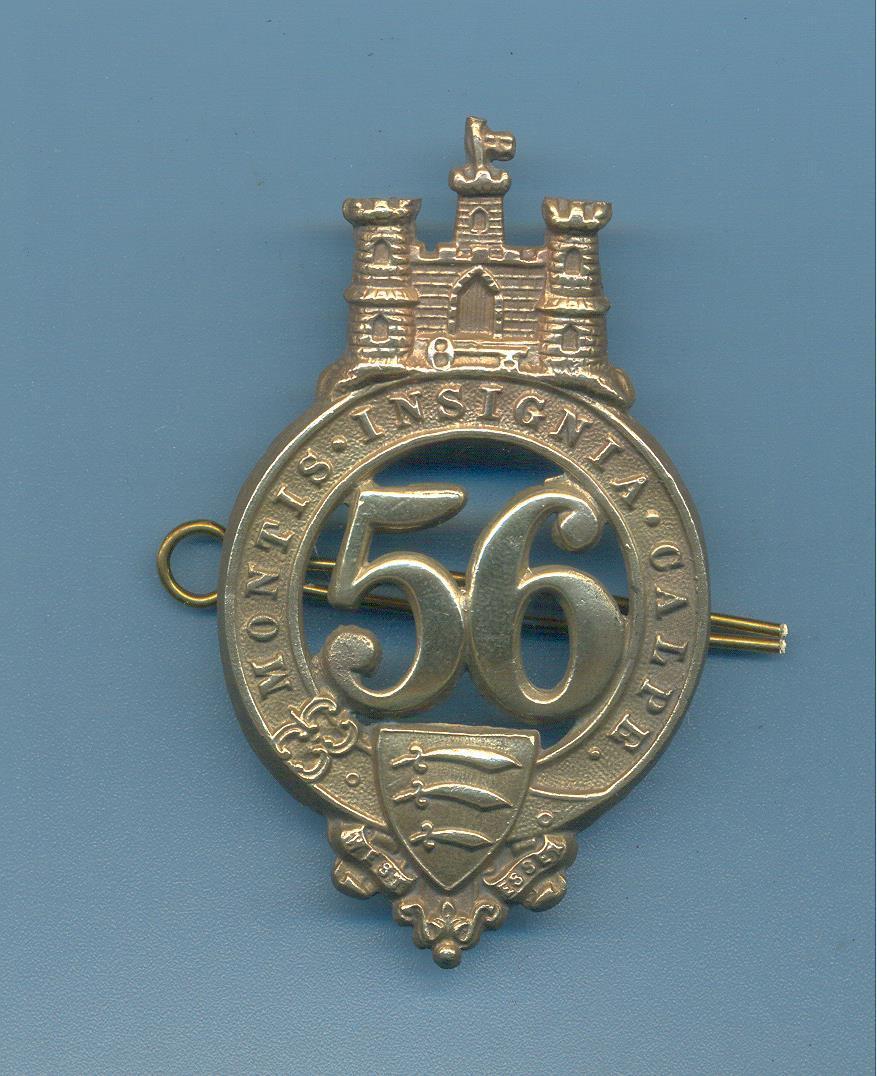 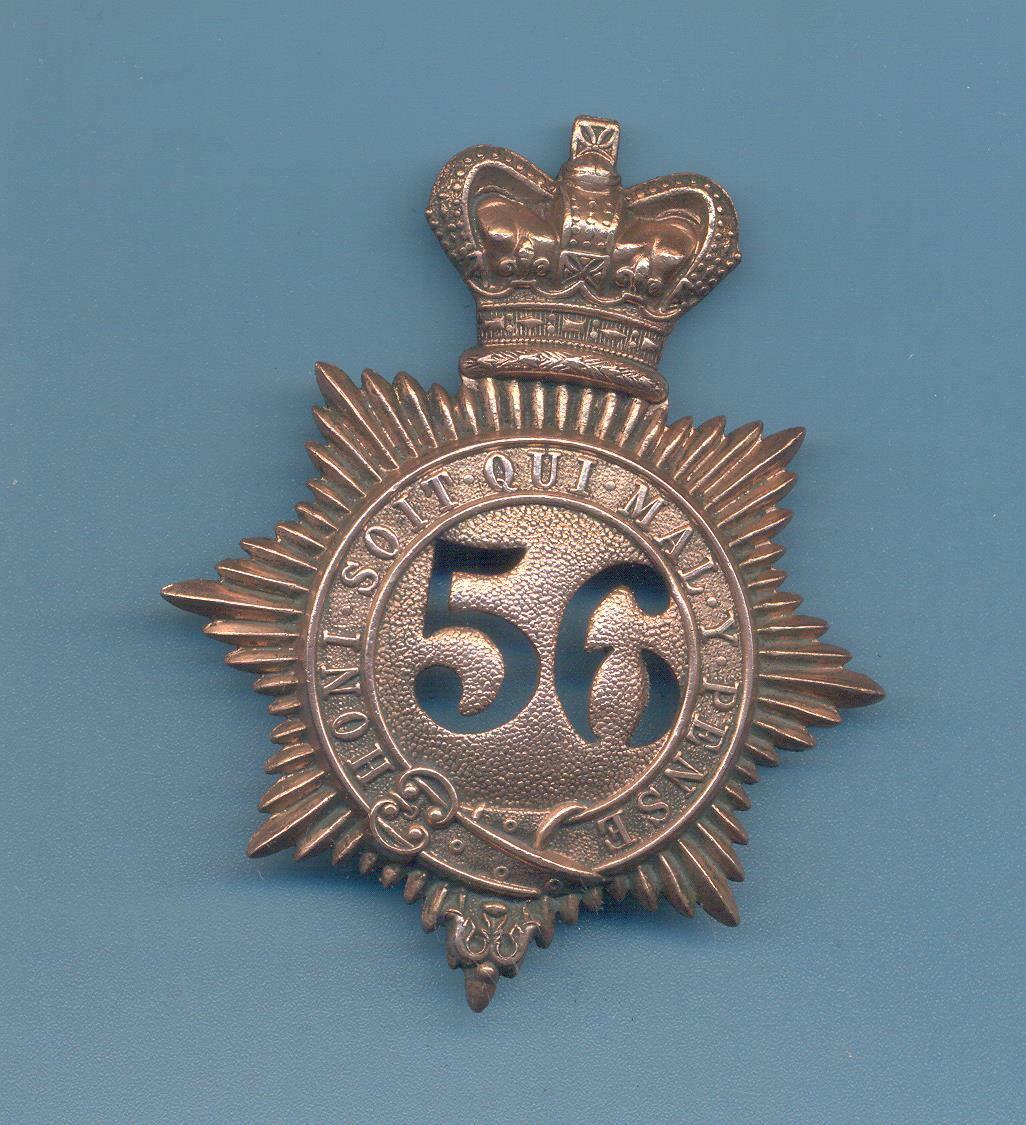 Some Glengarry badges for the 56th, they're Victorian, not Napoleonic, but it does emphasize the 6. 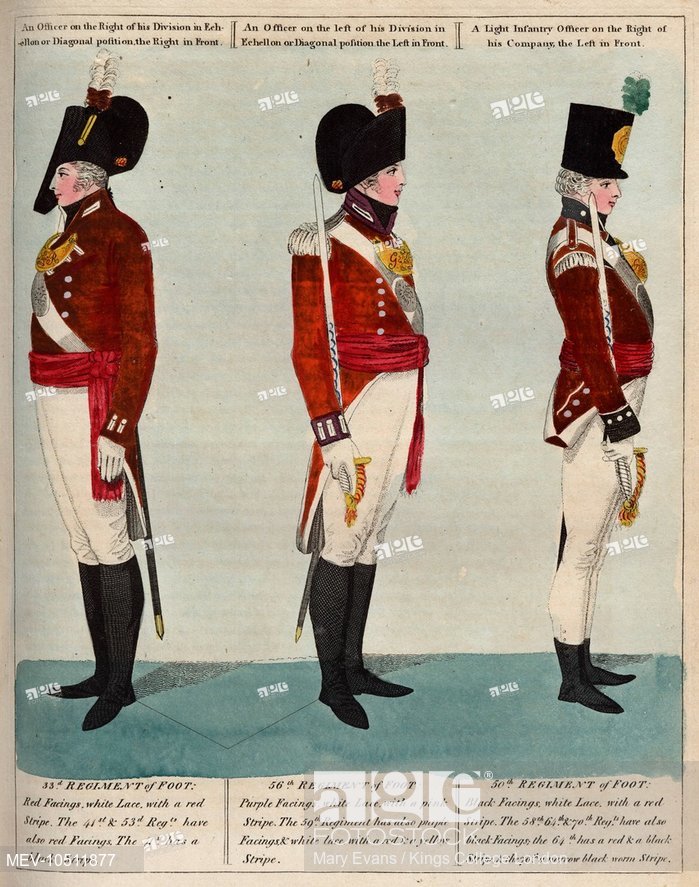 Another image from that Miniatures Page, this example has examples set for the 33rd Foot, 56th Foot, and 50th Foot. The 56th is in the center and they all appear to be officers. 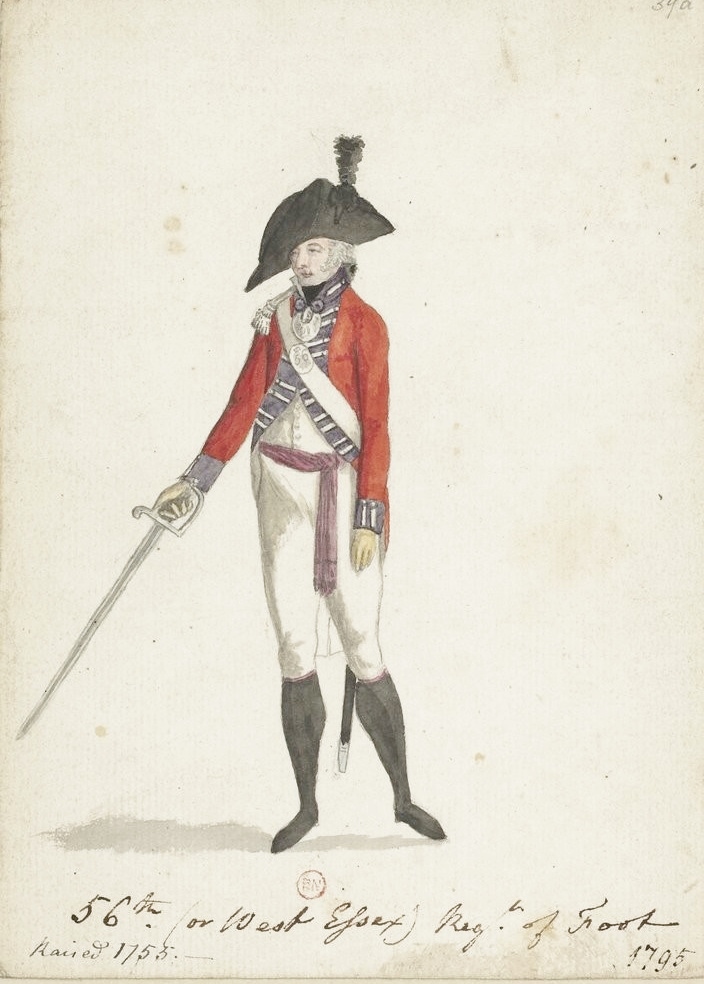 An old sketch by William Loftie depicting a British officer of the 56th Foot. 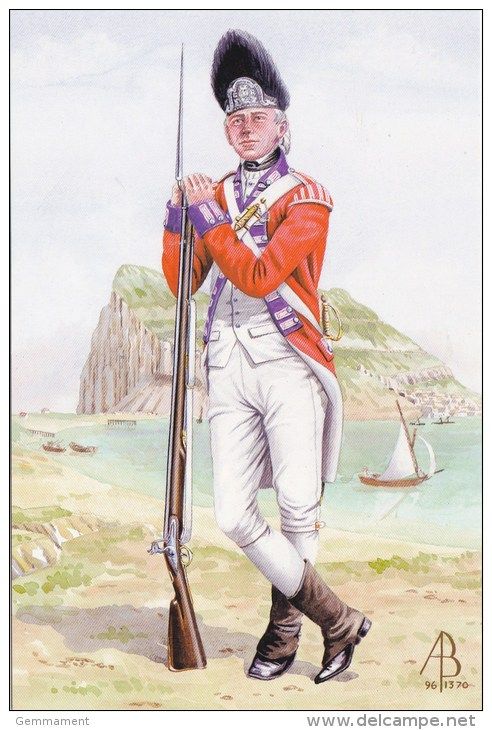 I guess the original came from a place called Delcampe, but I discovered this on Pinterest myself. Not quite the era we're going for, but you can see the darker shade of facing used. 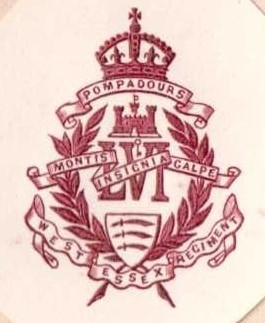 Here's the letterhead crest of the 56th Foot 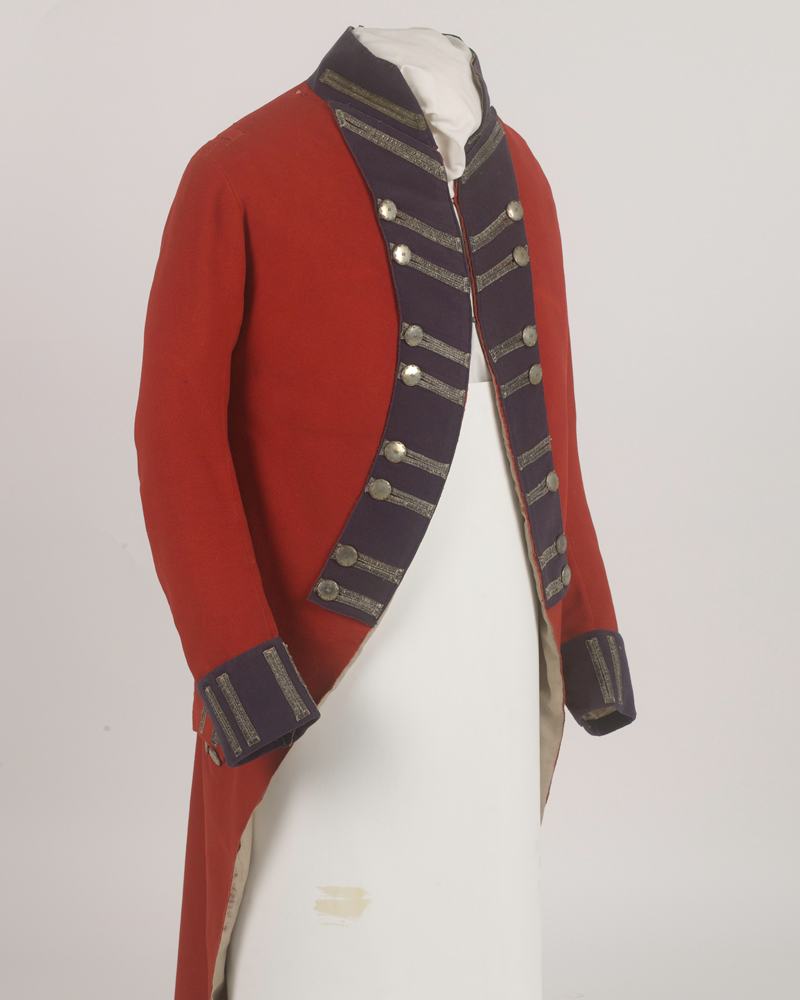 An authentic officer's coatee for a British man of the 56th Foot, notice the purple facings and silver lacing. Also notice how the regiment boasts lacings spaced in double-style, something I must rapidly address. 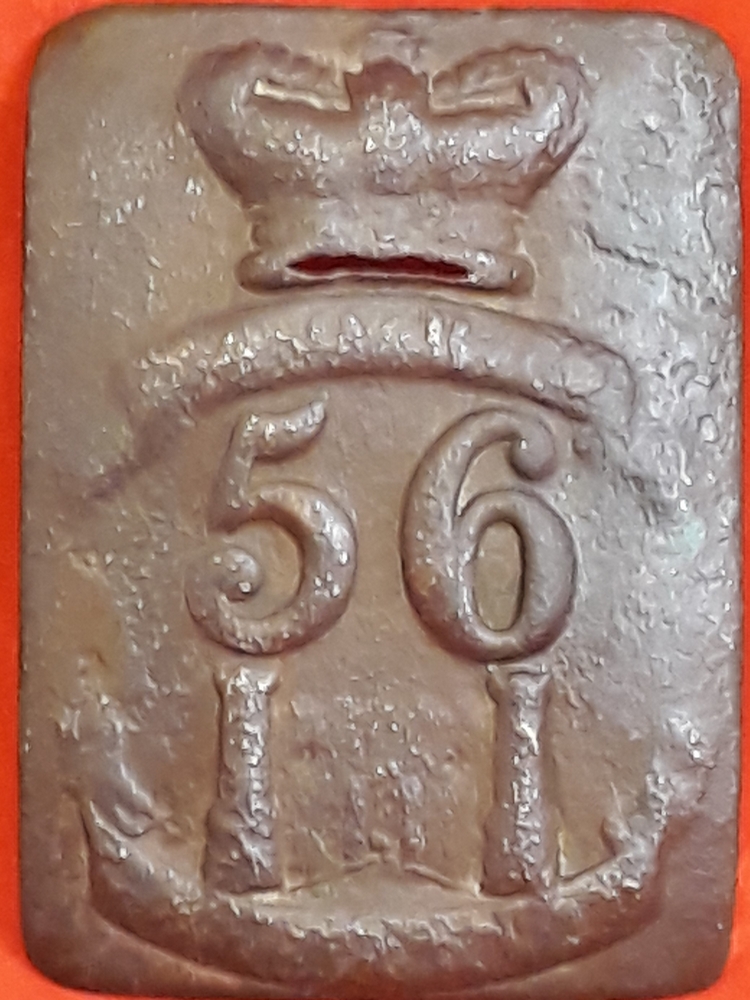 This was described as being the crossbelt plate of the 56th for the Peninsular era, evidently, I don't recall them seeing service at all during the Napoleonic Wars (Gibraltar garrison, India, etc. etc.) 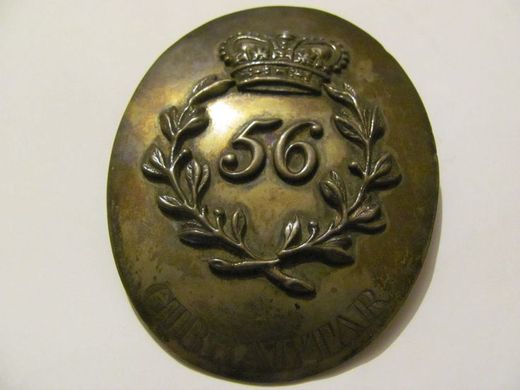 Here is another 56th Foot crossbelt plate, this one boasts the 'Gibraltar' icon on it and seems to bear more resemblance to the crossbelt plates of the Napoleonic Wars with its brass finish and higher detail. 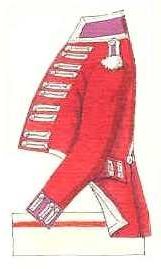 Here's an old diagram I found while browsing the web. Here's what appears to be part of a cigarette case (Some used to put images of soldiers on them) showcasing a West Essex officer. 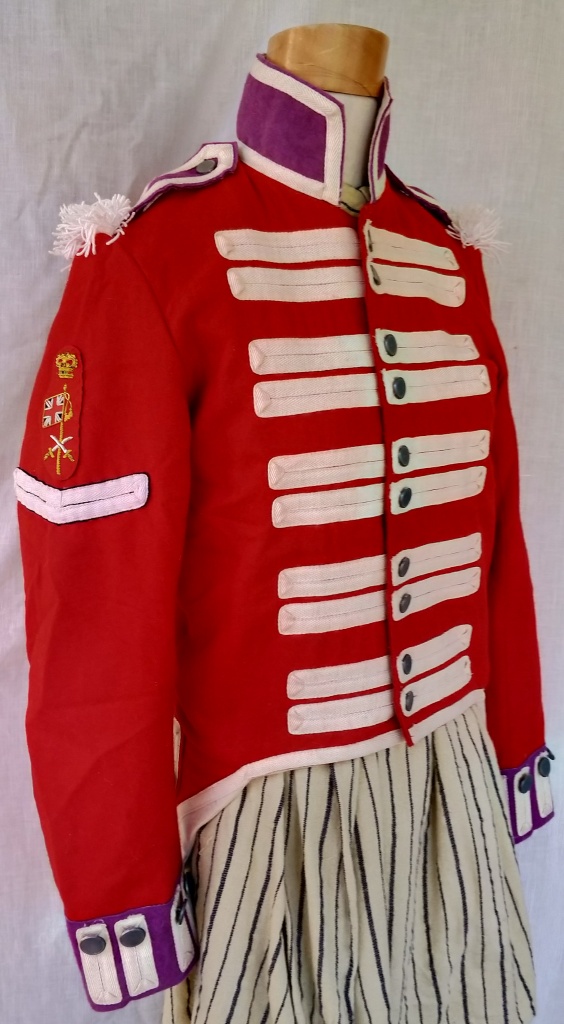 This is probably the final update of the addon and addresses two major long-running historical errors I added and adds a little extra something. Read...

This update includes the regimental drum as well as both flags.

This update grants us several new features including the musicians and officers as well as a general overhaul of the colors and bump maps.

A simple reskin of the 33rd Foot ranker to have him resemble a member of the 56th Regiment of Foot, West Essex, the only British regiment known to boast...