Your eyes slowly adjust to the gloom but immediately start to sting. Dust and plaster has fallen down from the ceiling, and you taste it in your dry mouth. Slowly the ceiling lights flicker on as the emergency generator starts up, and people begin to pick themselves up... ...Its August 9th. You've just survived the biggest killer of man in history. In 30 minutes, 3.6 billion people have died across the globe. Unknown to you, the population of the UK has quartered, and will continue to drop. You think briefly of your family before being dragged onto your feet by your platoon sergeant... "Come on son, there's work to be done!" Comes the gruff voice from the dark... but not yet... for now we wait... in the dark...

RSS This could be Rotterdam

Images and words from the battle of Rotterdam, and new weapon shots.

I remember Rotterdam well, it was only two weeks before the Nuclear Exchange, and the war was barely 24 hours old. I sat behind the barricade as an Officer ran back and forward from the first to second positions, carrying ammunition and water to and fro. The GPMG was on the floor looking out between two cars and the Charlie G was set up above of all things a sex shop.

In a brief respite i took this photo. 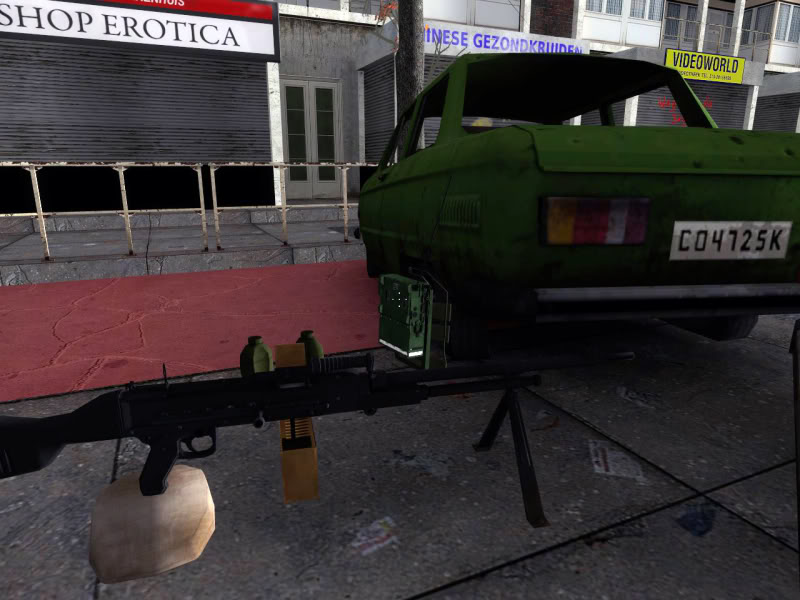 The gun was running low relatively low on ammunition, and some bastard had dropped the spare barrels when we'd ran from Germany. We were having to douse it with water from our already depleted personal water bottles. They kept a Clansman Radio next to the guns, as he was the only person thought to be stationary... how wrong they were. We were set up next to the unopened Maritime Museum, we'd set up a barricade, I cant seem to find a picture of the first one we set up with a derailed tram, but here is one we made with cars and concrete blocks... 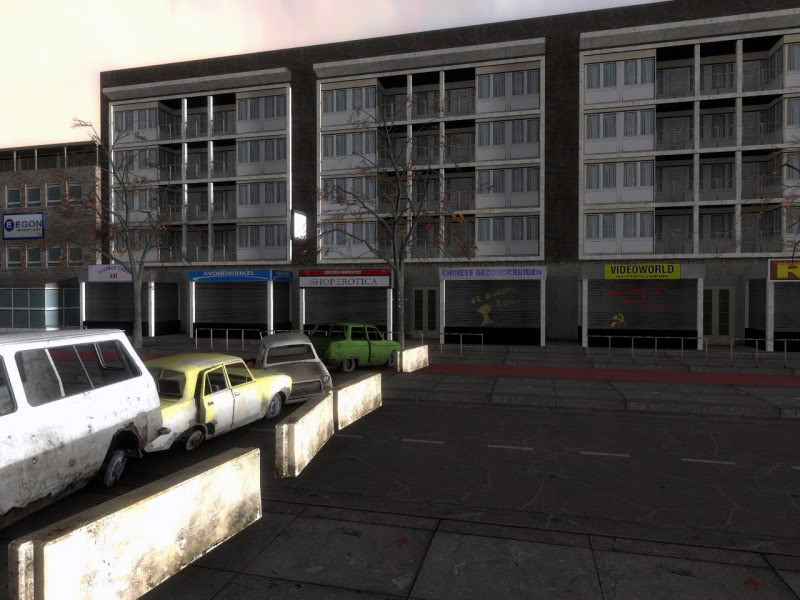 The Lieutenant that commanded us at the Museum in Rotterdam wrote a kind of diary report about it when we were on the boat coming back to blighty. You can find it here Forums.1985-mod.com

Oh, you asked what its life is like since the Exchange? 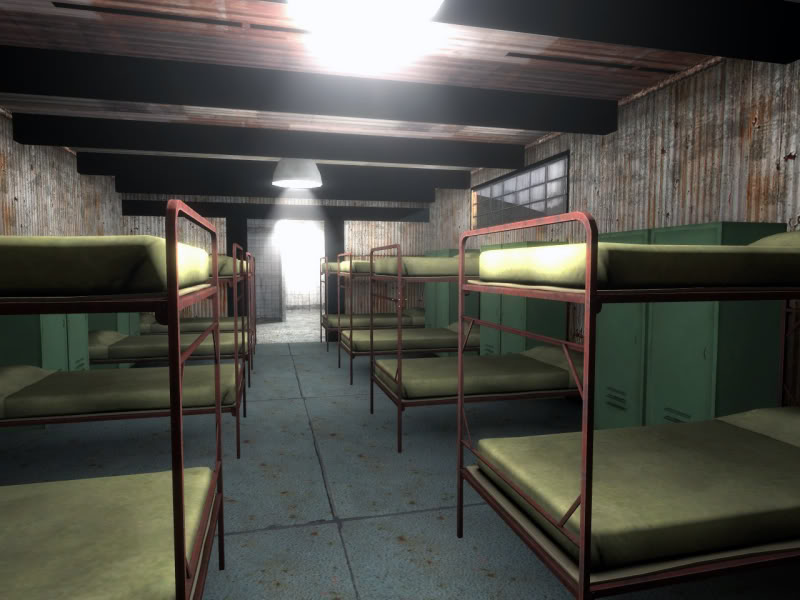 well this is our Billet. It is dug sem-underground on the left perimter of Fort Jericho. When i took this photo the platoon was stagging on, and i ran in to grab something. I thought it might be a good reference shot for you to see. Its very military for obvious reasons. This particular room belongs to the Recce platoon. They were the only Bastards to have a window. Lucky sods. Mind you they suffer when we get mortared, but shit happens i Guess. Through the door to the front are the ablutions and the Highbury trenchline, and a door to my left rear leads out to the trenchline at White Hart Lane.

The Armourer Sergeant asked me to send you these photos, said you'd requested them a few weeks ago.

Ahh, the L7 GPMG. What a wonderful piece of kit. A range of over 2km when on its tripod. 7.62mm of steel jacketed death. A gunner carries one of these, and some other poor sod will carry spare ammunition and barrels. We have 6 of these at Jericho. 3 are always out on the perimeter, while one is ready for patrols that might be going out and the others in reserve. 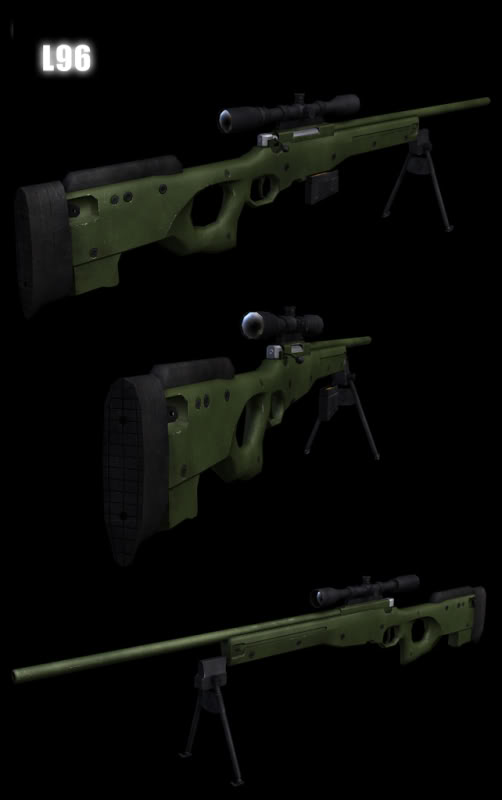 This little Beauty is the L96. This has only recently been introduced to replace the enfield Sniper Rifle. I've yet to experience using this thing in action, but the guys from recce claim you can get a good kill at over a K. It even has its own ammunition, green spot they call it (I think its basically the cream of that particular ammunition batch.) I'd like to take one out when i get a chance.

Well I better be off, stag starts in half an hour.

Those models are great! They look a bit low-poly to me though, but that's probably because I'm used to the models for Crysis.

yeah, models for source have to be slighty lower poly. thanks for the kind words.

your definately right there mate, however, its more of a secondary priority! We're a bit more keen to get in the military assets first.

Haha great! Live in Rotterdam myself... The street with the shops looks like the 'Schiedamsedijk', see Maps.google.nl :). +1

i hope the sounds will be as good as the graphics.

man great pic's ........i think that's one of the first gpmg's i seen in game good job guys ill be following this more closely now

thanks for the kind comments lads!

Thanks for all the comments all!

Thagt really looks a lot like Rotterdam, with the small shops each next to each other. Will you have the harbor in a map, too?

Rotterdamn - home of the bomb

we will have a small qua area, we're not quite sure as the entire harbour is extremely vast...

I, as a Dutchman, will hereby correct your Dutch in the map :D

I don't know if you can stil change it, but it would be nice to have correct Dutch in your game, wouldn't it?

"Chinese Gezondkruiden".. What do you mean by that? Is it a pharmacy?
Pharmacy = apotheek.

But the literal translation for Chinese health verbs would be "Chineze Gezondheidskruiden". Note that Chinese is with a z in Dutch.

And well that's all the Dutch I can read from these pictures ;)

well, that is taken directly from a shop front from rotterdam, you might have to go and correct them aswell lol!

Oh, you'd expect that all the Chinese people in Rotterdam would speak Dutch but no, lol