I seek out mods and games(Indies) that catch my interest and try them if I can. Other than that, I have been in the process of creating starships and fighters in the sci fi genre. I can model, but UV mapping is a different story. I've been asking for help with that due to my schedule with college and job searches, if interested, please let me know. I do image editing and some video editing as well, using Paint.net and Sony Vegas 9.0C. I also have a understanding on C#; Java; HTML; Dynamic HTML; CSS; and JavaScript. I'm always friendly and willing to help out if needed, unless otherwise shown.

RSS Large Project Idea(Basically, looking for some help too)

I have had an Idea for a long time, but I never got around to creating anything that was substantial. I am starting to get into doing UV mapping. I have been doing a lot of model making: 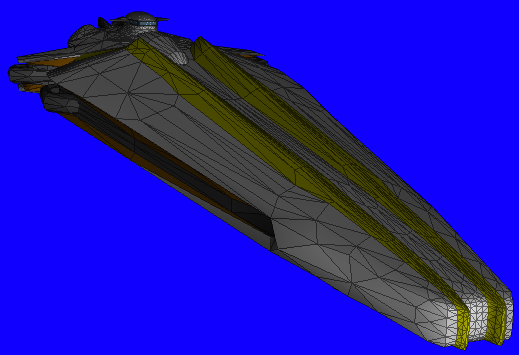 I am wanting to take the Freelancer base code and expand on it. What I want to do is make a F2P Space Combat/Trader Simulator RPG. It would be similar to how Freelancer is with some serious changes to the original for a different visual and gameplay experience. I want to create a new engine from a existing one, so it has its own characteristics from others like EVE Online. I'm wanting to get a team together and try a hand at making a new engine from scratch. This isn't some joke, I am being dead serious. Even though Star Citizen might come out at some point, it might no be free2play as they said. Games like Defiance has shown that the F2P tag can be misconstrued, making you buy the game and not pay a monthly fee. Star Citizen is making it's own, however, I want to reuse something that was made and used in that same aspect. I know of someone who could help with this project that can get a sponsor for it, hopefully. Since no real money is involved for now, I'm hoping some of you that read this wouldn't mind doing a project like this. If you want to get into doing this project, send me a Email at freeman156@live.com or give me a Private Message here, on ModDB.com.