System requirements: 386 brain, 4MB patience, eyes and fingers.
When you talk, it's like little people throwing up in my head.

With Portal 2 ARG and sub sequential release announcement, word came around about a second DigiPen student team that's been hired at Valve. Namely the one behind DigiPen project Tag: The Power of Paint. The connection between all that(besides DigiPen… duh) is the mention of paint puzzles in Portal 2 sounding almost exactly like the description of the student team game concept . Where you have a few types of paint with assigned properties to it for example: green paint is for jumping high above, red paint is for getting extreme speed up etc. And it gets insane when you start combining
them.

Nothing new under the sun, right...? Wrong! Having watched some footage (don't be scared from the dude whit the beard seems like a jolly nice guy ;) )

The game strongly suggest a splattering fun time. Once you get to the main screen, definitively spend some time in the menu of the game, a picture is worth a million words eh? 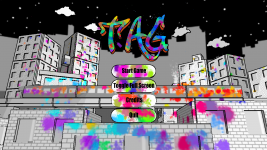 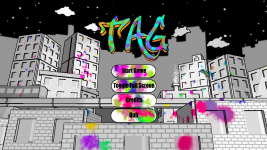 Speaking of the menu you see it's really simple which is good, from a design stand point and in terms of functionality. All you need are the W,S,A,D keys and the two mouse buttons, respectfully for movement and "painting" or for lack of a better word cleaning(more on that later). A good though has been given to weirdo's like myself who play with the y-axis inverted (as opposed to Narbacular drop where I had to hunt down & edit the config file to get that). 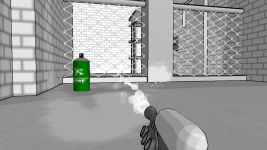 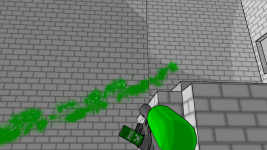 In terms of visual style the game really reminded me of Buzzy Bots looks. For an indie game made by students it suits the art style and fits the fun theme. So it looks OK, but then again looks aren't always everything. In this case the game is well presented by the looks which supplement the game play. Levels look relatively dull, which is intentional so they could easily convey the paint mechanic. Sure they could have done a little bit better job with them it would add to the game as a whole, but it doesn't hurt it much being the way they are. Sound is on par with the rest of the quality plus a few nice upbeat techno tracks add a nice ambiance feel.

If you saw the video above you certainly know that the difficulty aint on insane-o, it falls under the casual gaming. It won't be going too far saying that those fine lads did a better job at relaying their game mechanics than Nuclear Monkey Software(the Narbacular drop team). It is also worth noting that there is no way, to get yourself stuck in the game or render the puzzle at hand unsolvable. Here's where the "cleaning" comes in hand, you can paint the whole level in one color(if you have the time and nerve to do so), which means the whole level is tied to the properties to that color, you can always clean up after yourself and finish the level. And they have made a very good job at making a few instances that require you to do exactly this in order to progress. 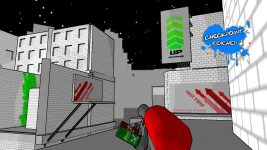 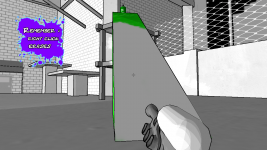 Subtle hints and well paced training a-la Portal are nicely executed, so as a player you know what does what, while you don't feel like you are being led but the nose, for the most part ;) . 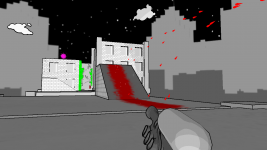 Pretty much just like "Thinking whit portals" is Portal's tagline, here you can apply "Now you're thinking with colors." On completion of the game you are presented with a nice level where credits roll and you left alone to wreck havoc as you please. Seriously think can hardly get better it like offering a child some ice-cream flavors, and then letting him loose inside the ice-cream van.....you bet things will messy as hell.
You can argue what's more fun portals or paint, what you can't argue is that paint and portals will be FTW...for the wolf, for the EPIC wolf!

Each month we bring to you new and old (updated) game and mod playthroughs, trailers and weekly recaps covering the mod and indie gaming scene, so sit...

MANN CO. sells only the finest products. We also get in fights.

whoa! that original style shotgun remake in your header! beautiful!
was actually planning on using that shotgun in a mod i'm working on, called further data. is that all right by you? wonrz was fine with it.