Sharks and pineapple pizza are the best! 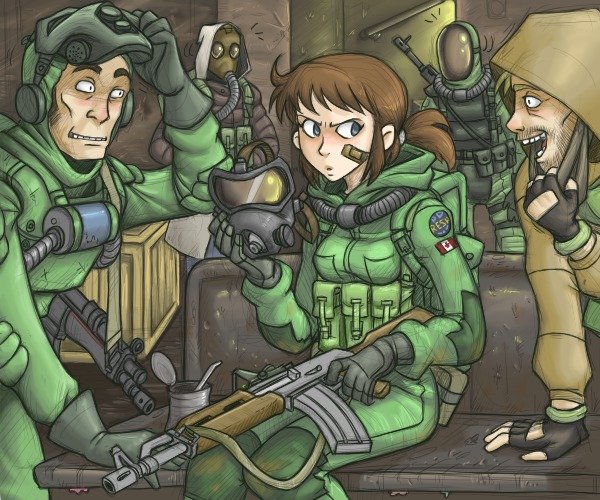 Nobody seemed to notice her when she first entered the run down underground pub. She had only been in the zone for a couple of hours, and she did her best to try to keep a low profile. The guards had stopped her, of course, but a couple of ruples and a chocolate bar had persuaded them to let her pass. She didn't intend to stay long, she was here for one reason, and one reason only. To find her father.

"Does anyone know a man by the name of Koscheck?" She asked, her voice muffled by the air filters in her mask, "Anyone?"

Silence was her answer. None of the men in the room paid any attention, they were too busy tending to their own thoughts and problems. She sighed and sat down. Discouraged and annoyed, she pulled back her protective hood and removed her gas mask.

The simple action of revealing her face had drawn the attention of every person in the room. Suddenly, all eyes were on her. Whispering and murmurs buzzed about the room, "A woman?! In the zone?!"

"And I thought I had seen everything!"

"I wonder how long she'll last."

A tall man in a flashy STALKER suit pulled off his own gas mask and smiled at her, "Who was it you were looking for? Ko? Kocheck?"

Another man slid over to her and pulled the scarf down from his face to speak, "Koscheck! I know a Koscheck! Me and him are very good friends!"

"Don't listen to him, he lies! I can help you find the man you are looking for!" Another man called out.

Perhaps she had made a mistake in revealing herself to be a woman. The sudden attention being thrust upon her was not unwelcome, but it did make her wary. Perhaps they were just being gentlemen, trying to entertain the first lady they had seen in months. Or perhaps they had more sinister motives behind them. Either way, she tightened the grip on her assault rifle. One could never be too sure when it came to S.T.A.L.K.E.Rs.