Alright, so I got Skyrim last week and now that I've had a chance to try out Skyrim properly I think I should write a little review.
Personally, as with most fantasy RPGs I don't like it very much. But that's just a personal opinion. The itself game is quite well made, there are tons of quests just waiting to be done, sometimes they even come to you. So overall it is a great game, so I guess that for some people the hype is actually quite true.

Good things about Skyrim are the beautiful open world you can explore, easy modding and mod support. Fairly good graphics (there is a mod that makes the graphics look a lot better). You can indeed choose what kind of person you want to be, evil, good, mysterious, a hero, a thief, it's all up to you and I like that.

Bad things about Skyrim are in my opinion the somewhat linear and repetitive quests. You need to play it a lot to get a higher level(and this is when it becomes the most fun). It, like with all other RPGs that I've ever played (except Mass Effect 2 and 3), has a crappy inventory system. Also the voice-actors all tend to speak with a North-American accent, which doesn't suit the game at all, the acting also seems dull and simple in most cases. Oh, and some actors sound like Arnold Schwarzenegger.

I'm not sure if I would have bought this game for the money I payed for it if I had known it would be like this. Still, it is a very good game and all people who like potions, crafting and a general game fantasy style world would love this game.
I on the other hand didn't start enjoying it fully until I started modding it with the Creation Kit kindly supplied by Bethesda for all to use. Creating an overpowered sword and hacking all the poor guards to bits was a great way for me to relieve the stress built up after playing this game without mods.
It also allowed me to customize my character a bit more.

And here are some screens for your viewing pleasure: 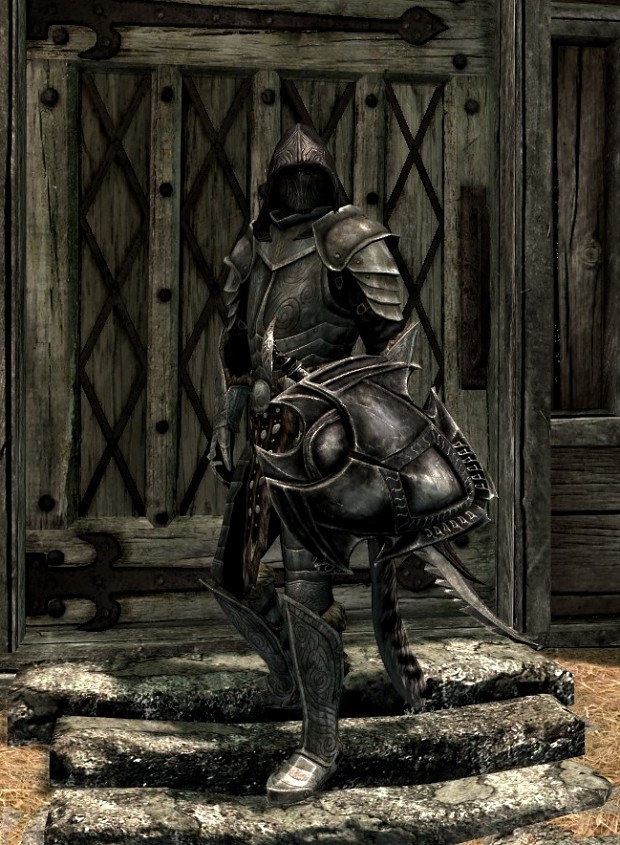 Hope I didn't include any spoilers in the screenshots. Note that the way the game is set up means that each person has a different experience. The order in which you do the quests is decided by you and since there are so many of them you'll never play them in exactly the same order as before, most will probably go unplayed.
I had the misfortune of completing the main story quest first, fulfilling my destiny as the Dragonborn, so as you can imagine no other quest after that seemed quite necessary and this made my personal experience very dull one after I had completed the quest of the Dragonborn.

So I continued playing for a bit but then I discovered the magic of the Creation Kit, it's a mod tool supplied by Bethesda who made the Elder Scrolls series.

Now I had the power to change anything in the game and I put it to good use right away creating my "Insane Deadric" sword, a sword so powerful it can kill pretty much anything with just a couple of swings. Same with my "Insane Flames" fire spell, it all gave me that edge a proper badass hero would have without having to spend the rest of my life playing this game.
Funny thing is that shortly after my "upgrading" the enemies in the game started adapting to my newfound power and I couldn't help but notice a connection, I see what you did there Bethesda. *Insert wink wink nudge nudge smiley-face here*
So yeah, "cheating", if you can call it that, might not have been the best idea but it did give the game the realism it needed and this also a better balance meaning only the really powerful enemies can withstand my giant burst of flames and any other enemy will burn nearly instantly after having been set on fire ...AS THEY SHOULD!
Call it whatever you like but saying that fantasy games should stick to a certain code of realism is NOT overrated in my opinion.

Now I'm just waiting for Mass Effect 3 to come out, a game that doesn't need to rely on shoving random quest missions in your face in order to have a good story. Yeah... I sure missed the brilliant storytelling from the Mass Effect games, it really gives the RPG genre its undeserved good name.

So, next review: Mass Effect 3 - the Reapers kill commander Shepard and take over Earth! ...probably...

That's it for this blog, have a nice day!
Admiral Skeybar

So you're planning a mod?

Well not an actual mod, I just modified some things in the game to suit me better. =)

No, I'm not making a serious mod for Skyrim. Though I have been thinking of creating some additional quests, serious ones, not like my "Overpowerrrr" mod I created for myself. =)

By the way, what can be actually done with the editor? Mods, maps?

It seems maps and quests can be easily created, but is it possible to make a proper mod (change the game interface etc.)?

Well I surely wouldn't know how to create a map or a whole quest. So it's not as easy as you might think.

Changing the interface might however be easier, I'm not sure. You'll have to download it yourself, play around with it a bit, they made everything relatively simple to understand for us non-programmers so it shouldn't be impossible. =)

Why did you have problems with the game without modding?

It seems you can use TGM command (in the console) to turn on the god mode. x-D

Ah yes, using console commands will turn of Steam achievements but (apparently) simply modding a weapon doesn't. Not that really cared about the achievements but it did feel kinda silly knowing that the program knew I was actively cheating xD

I don't really play Skyrim anymore now though, it somewhat fun for a while but I only really bought it to pass the time until Mass Effect 3 was released. A game, which by the way was a huge disappointment in terms of "endings"...

Mass Effect 3 herp derp. Just kidding :P It's just that everyone was hyping while I felt it wouldn't be as awesome as the first (or first 2) games. Turned out I was right. Is it still worth buying, or should I wait for the price to drop?

Well, yes, it is totally worth the money. Gameplay is great, the writing, acting and music are all better than in the previous games.
One thing you might miss from Mass Effect 2 are the unique missions. In ME3 missions are much more linear but also intense, you really get the feeling it's a battlefield.

Naturally the biggest problem with the game is the ending, if I were you, and if you think you can manage it, I suggest you do not play the ending. It does kinda ruin the whole experience not only for ME3 but also for the other games.

So though the hype is kind of right, Mass Effect 3 is rather disappointing in that aspect.

We (the fans) are not sure yet whether BioWare is going to do something about it or not. However, if there is confirmation the ending will be edited, changed or removed, then I would suggest you wait with buying until the revised ending DLC comes out.

I found that bioware got the movement system just right in this one (compared to ME2).

One of the downsides was the Dialogue system, you had maybe 2 choices in a 2 minute long cutscene, compared to the other 2 games it's quite sad, I guess you could see ME3 as being less "Make your choices" and more "You did this in ME1, this is what happened".

The worst thing was the lack of a formal ending, the ending itself was okay, I get that it's a tragedy, but the execution was really bad. Maybe bioware wants to continue the story arch from ME3 with a new protagonist?