Well in my last blog I sort of said my next review was going to be Mass Effect 3 after it came out. However things didn't quite turn out that way. Mass Effect 3 was a huge disappointment to me as a fan (mainly because of the ending) and really killed my love for the series as a whole, yes it was that bad.

The overambitious ending aside, and most other people tend to disagree with me here, I didn't find the game to be particularly good either. Well... it was a good game, very good in fact, just not better than the previous games in terms of originality and gameplay. Let me explain how I see it, Mass Effect 1 was great, it was a fun game with a new and exiting universe and story, it had many flaws but that is to be expected from something new. Mass Effect 2 wasn't much better in terms of story as such but it did improve the way the game told the story by a lot, Mass Effect 2 also had the most interesting campaign where each mission you did was unique in some way. Mass Effect 3 on the other hand hardly tried anything new, it was just going from one battle to the other and even though some battles were more interesting than others and this set-up did suit the story more, I still didn't find it as entertaining as the missions in Mass Effect 2.

One thing I can say for Mass Effect 3 is that it did keep the great storytelling from Mass Effect 2 and that it had some of the most emotional and jaw dropping moments of the whole series. Also don't get me wrong, I don't regret buying the game at all, I just wish they never made it like this in the first place.
Well, if you want to go deeper in my impressions of Mass Effect 3, you can read the blog/review I wrote shortly after playing the game on my website: Blog: Mass Effect 3

Right, Deus Ex: Human Revolution. I got this game and a bunch of other games a short while ago and I felt this really deserved a review.
This game is what Crysis 2 would have been if it was an RPG. It has stealth mechanics, cloaks, weapon upgrades, Aug-upgrades and several other nice little features that make you feel like a bad-ass.
Unlike Crysis 2 however, this game seemed to make it its soul purpose to make me as annoyed and pissed of as I possibly could be. It has the stick to chest-high wall mechanics like in Mass Effect 2/3 and I don't mind that as such unless you have to press a specific button to detach yourself which this game didn't have either, so that was all OK. The biggest problem I'd say would be is that any good idea the developers originally had seems to have been screwed over by making the game seem balanced. In fact, throughout the whole game you encounter the developers obsession with making the main characters powers balanced. All but one upgrade seemed to have a hint of "overpowered" to it, everything else was... not useless... just somewhat unnecessary.

Bossfights were a pain, most people who have played the game know that. They, however, weren't the thing I hated most about this game, my biggest frustration lies with the weapons. Unlike aug-upgrades, weapon-upgrades are necessary. For example, I'm not a guy to use assault rifles much in a stealth game but when I do I expect them to work. My assault rifle in this game however wasn't much use when I needed it and unfortunately I spent all my upgrades on my hyper-stealth-magic-silenced pistol for which finding ammo was like looking for a piece of hay in a Russian needle factory.

Story wise it's actually pretty good, not very original in some aspects but good nonetheless. You play as a guy called Adam Jensen who is an augmented cyber robotic cop-dude who for some reason needs to save the world. Yes this is one of those games that feels it needs to answer every question in the universe starting with the simplest of trick questions, what is the meaning of life? Are you still human when you're Darth Vader? Is there room for improvement in a "perfect" society? That sort of stuff.

You do get to do a lot of interesting missions in interesting places and at first the game reminded me a bit of Mass Effect 2. The similarities ended fairly quickly though after I progressed and found out more about who I was up against. In the fear of slightly spoiling something about the story, the real baddies are an old secret society running the world, I thought it was a nice touch but they stay fairly anonymous apart from some smaller pawns that fill the traditional role of "let's taunt the man who cannot comprehend our greatness"-people.

Here is a screenshot that sums up the their best argument in this game perfectly: 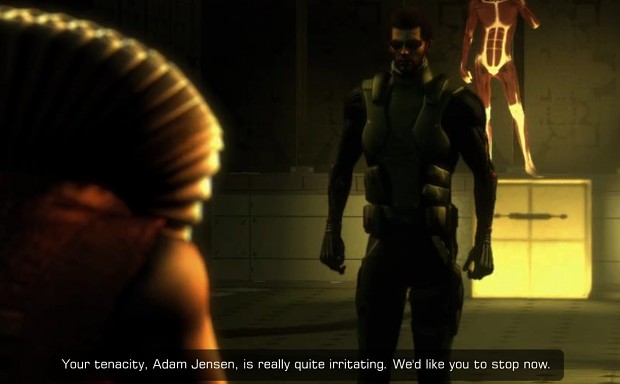 It doesn't get much more complicated than that (until the end of the game).

Overall I do like this game, even though the game annoyed me a lot in the beginning I grew to like Adam Jensen as a character not to mention dragging unconscious guards into a ventilation shaft is a huge amount of fun. Call me a collector or perfectionist but I never felt quite satisfied until my vent held at least five guards.

So I rate this game 7/10 with a very generous seven just because I cannot say it is a bad game or even an average game. It is in its over balanced, not-always-so-fun kind of way still a very good game.

That's it for this blog, have a nice day!
Admiral Skeybar

To me there's nothing to be disappointed about. I really knew that the 3rd part would undoubtely fail. Even I've read an article where it was stated that the 3rd part or last part of a certain sequel fails surely.

It is true in many cases. I didn't say this game was bad though, just a little boring at times.