Got an opinion? Want to try convince the modding world that something or someone is right or wrong? Welcome to The Soap Box, Mod DB's official group for those of you who just want to ramble on about something which is bugging you.

Scott McCloud's "six steps of creation" have been a revelation to me. Here's why they ought to be for you as well. 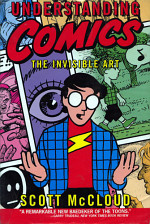 Scott McCloud’s Understanding Comics is an excellent book that every hobbyist game developer should read. I say this even though I didn’t and (sorry Scott) still don’t hold much interest in comics, because important chunks of the book also apply to games: both face an uphill battle against infantilisation, having been hijacked by a market dominated by adolescent males; both have existed relatively unexplored in human culture for millennia; and, like all forms of expression, both require the six steps of creation.

Of course, McCloud goes into what the above means in far greater detail. He explains how each layer wraps around the next in the finished product, and that every creator starts at the list’s end before working backwards.

I myself have been guilty of adding to it. My first attempts at making maps and mods were to a byte borne of the simple desire to re-create that which I has seen and enjoyed elsewhere, and I waded into each project with knowledge only of its surface. It’s no coincidence that of my brief explanations above, number six is the only one not to end with a question mark.

Even today, four or more years after I took an interesting in modding, I immediately saw as I read McCloud’s book that I was far from reaching the end – or should I say the start? – of his list. I began my current project quite deliberately to shore up my knowledge of my craft, and am only just beginning to wrestle with its structure. My idiom is lifted more or less directly from other games, although that is partly for workload reasons. When I consider the very core of my work I haven’t been able to pierce its form at all, and what little expressive purpose I have has yet to touch what I’m actually doing.

On the bright side, at least I now have a better idea of what the future holds for me. Where are on the steps are you?

* By which I also include those derivative of other media

This book is wonderful. I think anyone that wants to be a storyteller, regardless of what medium they use (movies, comics, games etc.), can get something out of this book.
I was reading this for the first time while I was enrolled in a game design class and mentioned to my teacher that it was touching on similar subjects he was covering (narrative, design, culture). He told me a few weeks later that he was making it the textbook for the Intro to Entertainment Technology classes. It's that good. You can pick it up at most book stores for about $20 or less.

Well I might have to have a look at this. It does seem rather interesting.

Going one step back perhaps you know the book Rules of Play: Game Design Fundamentals, wrote by Salen and Zimmerman, where you get three concepts (Rules, play and culture) and you can understand any kind of game. It's deeper than this but really useful. Nice article!

it is a great book, long yes but, Scott McCloud has a great way of breaking down the big ideas into smaller easy to understand segments...I agree a must read for anyone involved in game development (or any creative endeavor for that matter)

Indeed, it is a very good book. My school uses it for it's Game class.

The Soap Box Official with 84 members