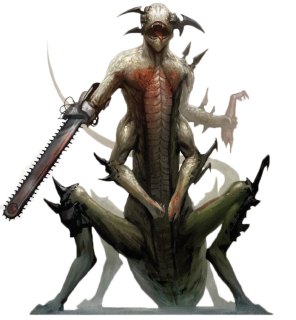 The Rak'Gol are vicious xenos marauders and a relatively new threat within the Koronus Expanse of the Halo Stars adjacent to the Calixis Sector, encountered first in the dim stars past the Alenic Depths a little more than a standard century ago. Striking from the blackest reaches of the Alenic Depths, the violent and cruel Rak'Gol have become the byword for death and terror in the Koronus Expanse. Horrific, eight-limbed monstrosities, twisted and warped, the Rak'Gol seem to exist only for slaughter, descending on voidships and isolated colonies like a plague, and disappearing again into the cold depths of the void. Though the underlying impetus for the Rak'Gol's seemingly random attacks remains a mystery, those who suffer their predations rarely live to tell the tale. A xenos breed of which little is known for fact, they take the appearance of rough-hewn and irregular stone reptilids, eight-limbed and over three metres long. Chalky white in colour and mantis-like in bodily arrangement, Rak'Gol warriors favour cybernetic augmentation to increase their abilities and replace lost limbs. Their point of origin remains unknown, as does the motivation for their sporadic attacks on human-held worlds and vessels, other than to slaughter indiscriminately and steal minerals and weapons. Their rasping, screeching language remains incomprehensible, and no successful communication between the Rak'Gol and humanity has been recorded; no Rak'Gol has ever been captured alive. Indeed, even their name is taken from children's stories of mythical monsters from the settlement of Footfall's slums, legends which they superficially resemble.

what we need is some W40k game that show this race in there true colors, that give some more details

Waz up! they are cool race.

As Rak'Gol high lord I appreciate your words. )

Now group about interesting and mysterious 40k race is opened!

A group for Softimage / Modtool Users. Model or animate in XSI? Come share your tips and tricks.

This is a group to commemorate a true genius and virtuoso of planet Earth; Leonardo Da vinci.

Can you do backgrounds? and you want to post them somewhere? Join here! Post your backgrounds you made! (Background and backdrop are the same!)

For us folks who like to stay Free and use the Blender 3d program over every other costly options!