NEWS: Zafehouse: Diaries is out now. 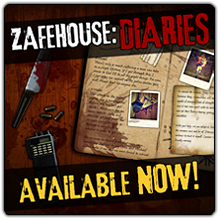 Zafehouse: Diaries is a tactical game of survival, planning, resource management and problem-solving. Manage your survivors’ needs, prejudices and motivations and you might stay around long enough to be rescued.

Tell your story
A unique, diary-based interface records your actions, reveals the state of the world and provides hints and clues to help you.

Pick your battles
A sophisticated combat engine models all battles in the game, from a zombie slipping in through a bathroom window, to a swarm flooding into the hospital you thought was secure.

Know your survivors
Survivors have unique personalities and skills – use them wisely and the group will work efficiently. Left idle, they’ll explore, socialise, play games and tinker.

Relationships matter
Make sure you check in on your survivors and see how they’re getting along. Poor relationships mean they won’t work well together, and may even end up fighting.

Customisable
Add yourself and friends to the game and create mods using C#.

You may have spent a few dark and lonely nights in Zafehouse: Diaries, desperately trying to keep your band of dishevelled survivors alive against the odds. Until now, it's been hard to know just how well you might be doing, in comparison to other players. 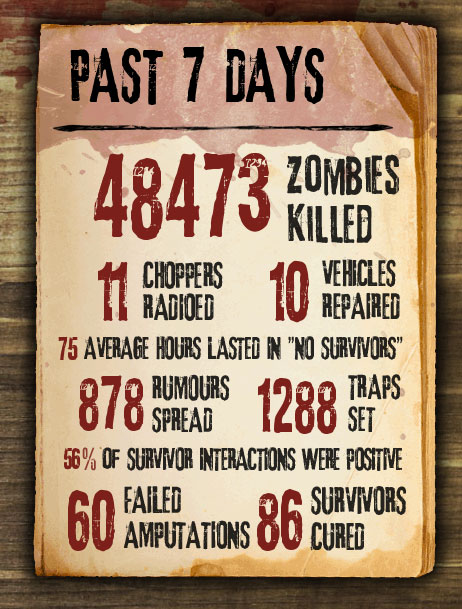 That's a lot of dead zombies!

So, we've just put the finishing touches on Bodycount, a "dynamic" infographic that shows a number of interesting stats collected over a sliding seven-day period including:

It also shows the lifetime percentages for a number of dilemma decisions. Curious as to how many people have fought the super zombie? Or locked a survivor away in a room full of zombies? Well, now you can find out.

The page updates once per hour, at which stage it will randomly select four dilemma percentages to show, so, make sure to pay it a few visits to see all the stats! 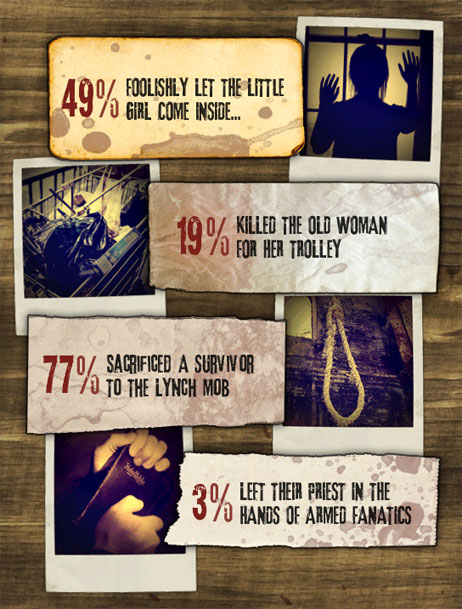 Zafehouse: Diaries is a complex game, but that complexity might not be immediately apparent from looking at screenshots or videos. With Bodycount, we hope to show off the many, many cogs turning under the hood of the simulation.

Yes, there's more to it than just shooting zombies! Survivors live, die and get along based on the player's decisions, but there are some difficult, moral choices that must be made if you want to survive and a great deal of them won't leave you with a warm, fuzzy feeling.

We'll continue to add or change the statistics shown over time, but for now, it should give you some insight into how others are braving the unrelenting deadliness that is Zafehouse: Diaries.

Good news -- we've just released a massive new patch, bringing Zafehouse: Diaries to v1.2.0. And when we say "massive", we mean it! Along with the usual...

Zafehouse: Diaries has been updated to v1.1.9. For this patch, we've focused on user interface and performance enhancements that should make playing the...

Play a mighty lineup of games from IndieRoyale inc: Waveform, Avadon, Zafehouse: Diaries, Derrick the Deathfin, Tidalis and War of the Human Tanks.

This is the demo version of Zafehouse: Diaries. Its stability and performance may not reflect the full version. If you notice any issues, please let us...

This is the demo version of Zafehouse: Diaries. Its stability and performance may not reflect the full version. If you notice any issues, please let us...

Is the game going to get more updates, or is it finished now?

this is a joke?

It is not. It is a computer game.

Hello all. Steam keys are now available to those who bought the game on Desura. Check Indiedb.com

I got this game as a gift from someone, can I get a Steam key for it through my Desura account? (I don't have the original link for what ever bundle it was a part of)

I am a little confused. How do I get the Steam Key from my Desura Account?

I purchased Zafehouse through Desura several months ago, is it possible to get a Steam key now? Thanks!

Sure is! Steam keys should now be available.

Will we get a Steam key with the groupee bundle? It's just to know, no problem if we doesn't.

Yep, Groupees keys have already been distributed. You should find it on your Groupees account.

a bit expensive for what it is, good indy small game