=== We are now funding this project on Indiegogo! Please check it out! ===

The game features a new and truly unique kind of game-play experience. Every time Wanda visits a new planet, both their souls connect, thus allowing her to control the planet and move it around. The local animal population can either be accumulated into towers or if dropped in a certain order, scare each other. The scared animals run away while leaving their gassy flatulence behind. Wanda collects that gas and uses it throughout the game and to travel from planet to planet. So basically this is a game about farts.The order of which animals scare each other is called "the circle of shame". Its mechanics are based on the game rock-paper-scissor. In Worlds of Wanda that means that Elephants scare Lions, Lions scare Dogs, Dogs scare Cats, Cats scare Mice, and eventually Mice scare Elephants. Thus, the circle of shame.

The game lets you dive into it as a new player, but soon enough you can challenge yourself and play it more skillfully. It can really matter how well you build your towers, because the more animals scared on the same move, the more gas you accumulate at one go. While regular players can settle for doing one tower combos, the mechanics we've built support combos on multiple towers together if you do them fast enough. This requires more planning of your moves yet is far more rewarding.

Besides dropping animals Wanda can also release some of the gas she accumulates as a special attack! She can either do it in small bursts or if held long enough, in one super big one! This attack can help her in tight situations in the game, including boss fights!

But that is not all, Solid-Ivan will constantly hinder your efforts by sending his evil robotic minions and attempt stop you from collecting that precious gas. Your second goal as the player is to avoid enemy attacks, defend your towers and even attack the minions back. So basically this is also a game about throwing animals around (we hope PETA doesn’t mind...)Below is an example from one of the first enemies, the All-Mighty Planet Puncher! Ivan uses it to cause earthquakes that throw your animals from tower and tower while foiling your plans and making it a challenge to do combos. You must use the animals to attack the Planet Puncher and destroy it before it messes your towers too much! Each world comes with its own unique enemies that become more and more challenging!

At the end of each world you will face a monstrous boss! Each boss adds a different kind of gameplay and you will have to find its weakness in order to defeat it. Some in sillier ways than other! They are challenging and fun!
Among these mechanics includes punching the boss directly with the animals, shaking the planet just at the right moment, using boss attacks against themselves and building large towers to attack the boss like a whip! Be sure that there are more cool mechanics in the final game, but we really don't want to spoil you everything, because a big part of the fun is to find that out on your own. 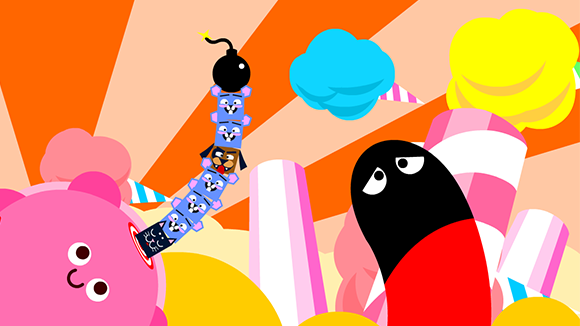 As for final words about the game, we believe a good story is an important key element to a good, memorable game experience. We created a compelling universe with strong interactions between Wanda and the characters she encounters throughout the game. We plan for the characters to be deep, vibrant and to make the player fall in love with them. Maybe, even shed a tear.

To promote Worlds of Wanda and grow its popularity (top games), use the embed code provided on your homepage, blog, forums and elsewhere you desire. Or try our widget.

The Attack on Titan Fan Game is a non-profit game in development that will create a fun, highly skilled, multiplayer experience.

The second game in the Gundemonium trilogy, and continues the tale of humanity's war with hell brought on by alchemy. Its gameplay is a second extra-strength...

Whack 'Em Zack is a strategic multiplayer brawler where you have to defeat your friends by swinging a mallet around, picking up power ups and be the last...

Neko Land is a game with a particular gameplay. It is set in the map where usually in other games you have to select the level. To complete the levels...

An Oath to the Stars

Left for dead by her closest friend and comrade, Hoshiko is now looking for revenge. Follow her in this modern hardcore danmaku SHMUP about revenge, friendship...