Water Planet is a single-player first-person adventure set in a distant blue world. Gather resources to fuel an interstellar ship as your on-board A.I. Gemini guides you through sunken ruins and ocean depths while listening to the music of VIRGO.

Upon entering the atmosphere of a distant blue world, you are awoken from cryosleep to gather resources to fuel your interstellar journey onward. With the guidance of your on-board A.I., Gemini, hunt down crystal shards amid sunken monuments and alien flora.

When intermittent energy surges disable the link between you and Gemini, encounter a lone cybernetic jellyfish named Aqua. Travel through portals, dive to the depths of the ocean and fly on a hover transport that connects the ruins of a lost civilization. Enter the world and music of VIRGO on Water Planet before you launch back into hyperspace.

VR and Desktop Modes Both Supported

Water Planet supports the HTC Vive with its motion controllers and standard desktop play as well. No VR headset is required, but it is suggested.

Miami-based musician and multimedia artist Virgo evokes an ethereal, dreamlike quality in everything she touches. The recent launch of her virtual reality game Water Planet at the Institute of Contemporary Art (ICA) in Miami is no exception, as she transforms the second floor of the museum into a glowing extraterrestrial wonderland.

Virgo, a.k.a. Elizabeth Ann Clark, and her partner Albert Ovadia spent the past year developing the game, which features a soundtrack of songs from her most recent EP and original sonic compositions. Water Planet is a first person space exploration game, where you explore a previously inhabited planet as an interstellar traveler, with the help of a cybernetic jellyfish guide named Aqua. 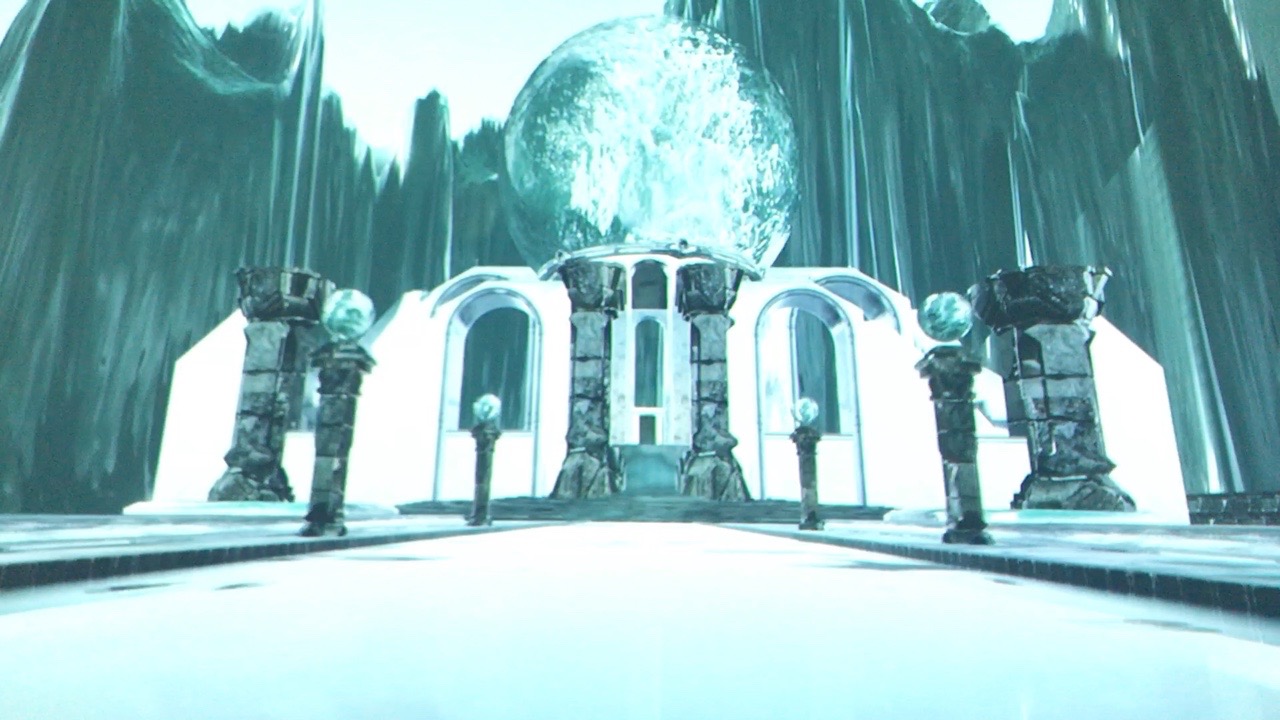 "It evolved from creating visuals for my live performance, and then those early levels ended up being the framework for what is now the VR game," Virgo tells Creators, referring to the genesis of the project. The cinematic quality of the visuals and palpable synergy with the music are executed in a way that could only be achievable in virtual reality.

She explains, "VR has the ability to transport you, and even if the graphics are not hyperreal, the spatialization of sound and image in 3D space creates the illusion of reality before the eyes. I want to raise awareness for the medium itself and to hopefully encourage people to think for a moment about the future of Earth, especially the oceans." 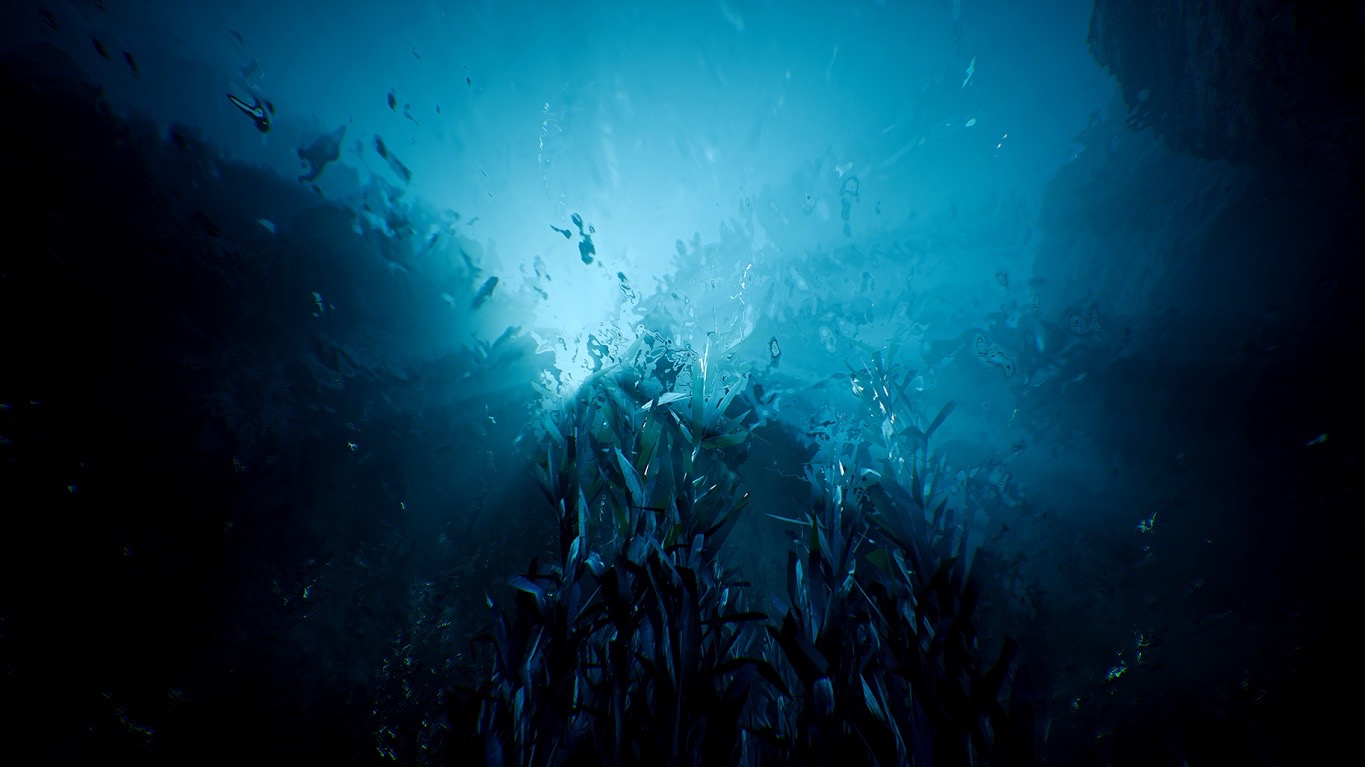 Image courtesy of the Revera Corporation

After putting on a headset, the transportation to an alien world is almost instant. The viewer finds themselves suspended in front of a galactic membrane. They enter the first level, swimming, jumping, and gliding through landscapes, while enveloped in the danceable beats and soft ambient sounds characteristic of Virgo's music. Imagine free diving underwater without the burden of an oxygen tank, then subsequently exploring alien ruins and temples.

For the launch event at ICA, Virgo partnered with friend and visual artist Mark Terra to create a series of sculptural elements to install in the gallery spaces of the museum. The Styrofoam sculptures resemble the icebergs, glaciers, and mountains present in the game, making it feel like a fantastical planetary terrain. The largest sculpture takes up an entire room, illuminated with projected images of flowing water from the game, with ambient sounds filling the room. 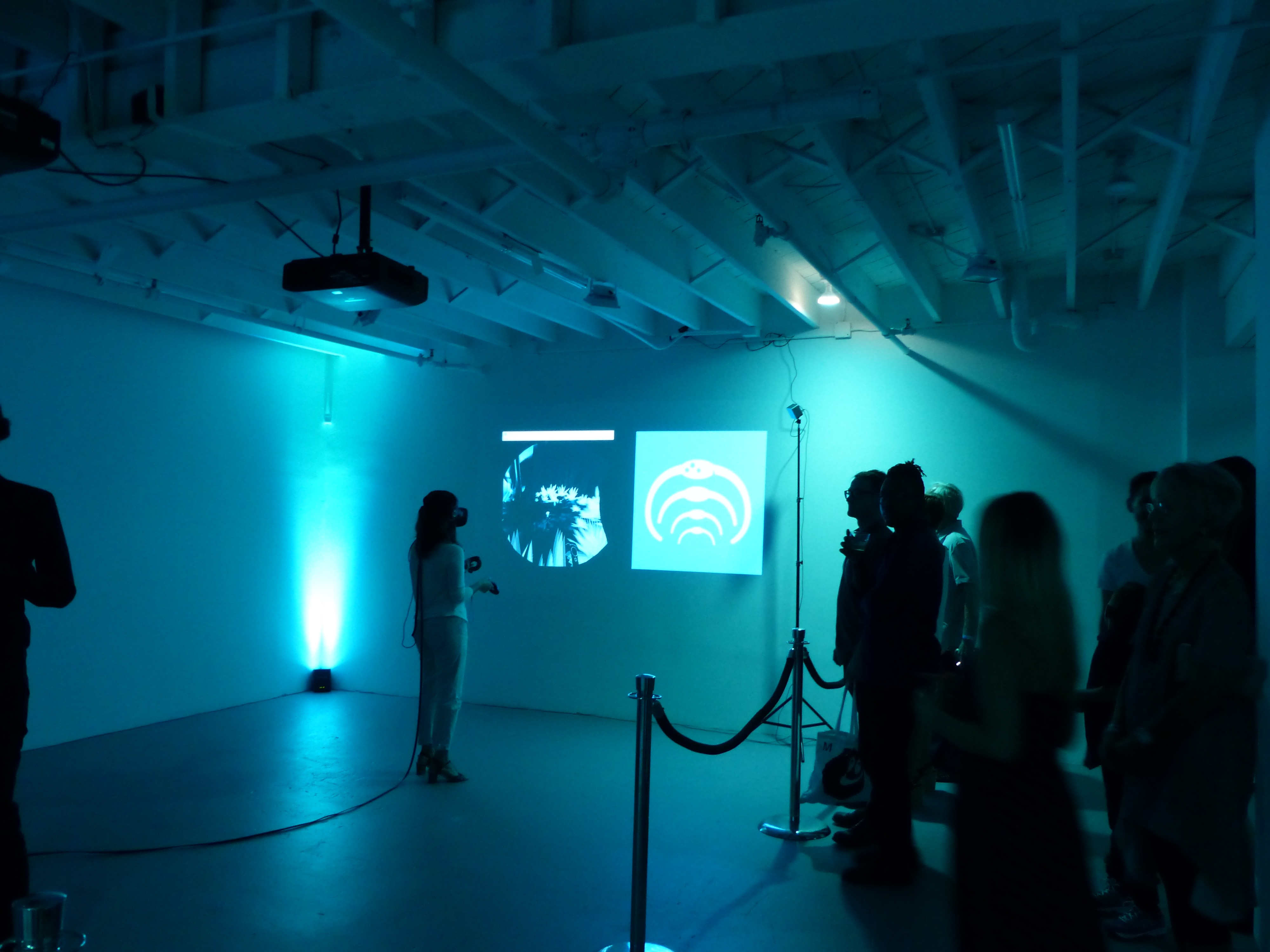 The site itself is important to the experience, and appropriate in a city surrounded by water. "The future looms. We're at such a critical time in human existence, if we don't look to the future of technological and scientific advancement, we face extinction. Evolve or die. Virtual reality offers a whole new format to experience and learn from the world as well as granting access to higher learning in virtual space" explains Virgo.

Virgo's futuristic sensibilities are a suitable match for ICA's forward thinking programming. This institutional collaboration and the artistry of the game demonstrate the emerging implications of VR to the art world, with its ability to create multi-sensory experiences. 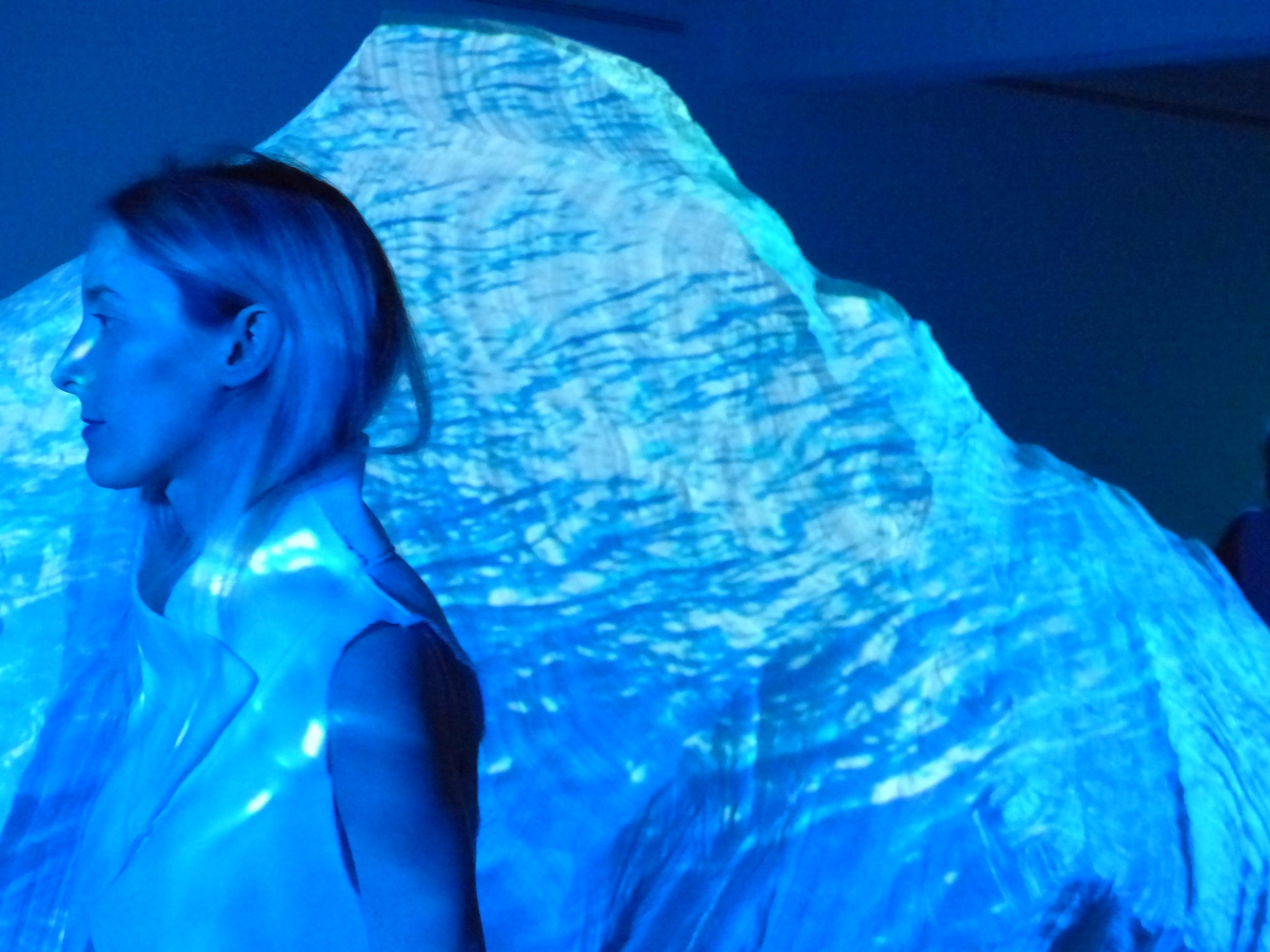 The meandering corridors of the museum floor are bathed in turquoise lights, encouraging attendees to explore through the rooms in a way that parallels the experience of moving through the levels of the game. One hallway has three VR stations for attendees to try out the game.

Virgo, dressed in her signature white, greets and assists a long line of eager participants like a mystical gaming spirit guide. In one of the rooms there is a projection with a looping series of vignettes from the game. In every nook, people are completely immersed in the environment of the exhibition. It is an escape to another world and a glimpse into the future. 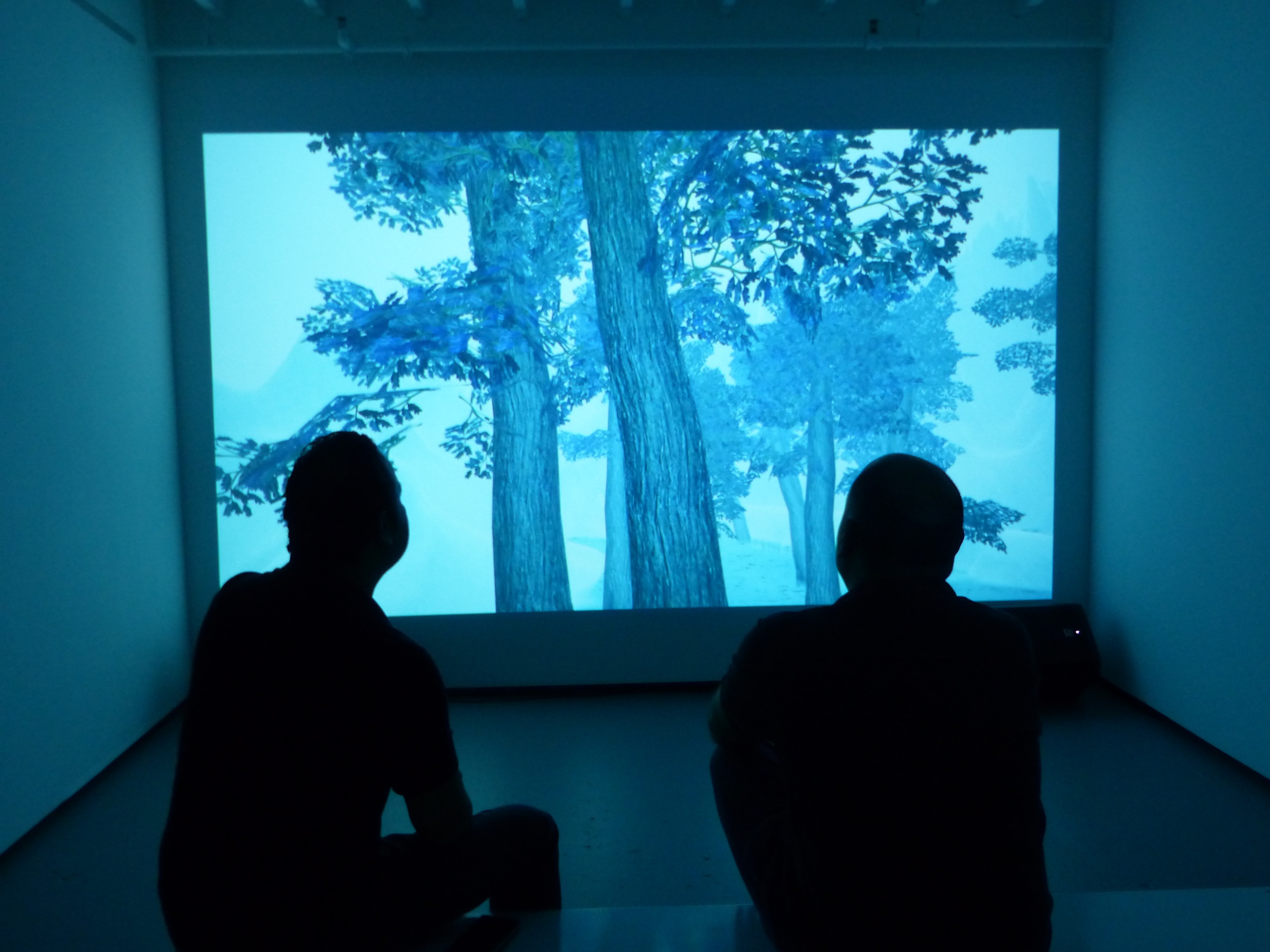 The Water Planet game is available on Steam for desktop and VR and is compatible with Oculus and HTC Vive. Virgo's album is available on iTunes and Beatport, and is streaming on Tidal and Spotify. Virgo is currently planning a live performance in VR, and you can catch her in concert at III Points Festivalin Miami this October. Water Planet was created using Unreal Engine in collaboration with the Revera Corporation.

Read the article on 'Creators'.