Voyager: Grand Tour is unlike just about anything else on mobile. A physics puzzle game inspired by one of the most successful scientific missions in human history, it marries detailed 3D graphics and realistic rocket science with a casual-friendly controls and approachable design. The result is a game for people who love space travel, and space travel for people who love games.

The concept is simple: the player aims their probe at a certain angle and speed, launches it, and then gravity takes over - hopefully propelling the Voyager probe to a close, dramatic flyby.

Of course, some levels introduce new twists and mechanics. What's the best way to use a single-use thruster? A well-timed forward thrust could shave a few seconds off the journey, or perhaps it can be the difference between a collision course and a near-miss!

The game features dozens of challenging levels set in every corner of the Solar System, from our own Moon to the distant, icy Kuiper belt. Some levels are straightforward - how do I get from here to Mars without getting lost or crashing into the surface? Others require players to, say, gravitationally slingshot around Saturn in order to reach Neptune, or race to catch up to Uranus before it passes out of range.

Additionally, the game's 3D physics allow gameplay variations that are not possible in 2D physics games, including levels that require the player to maneuver "in" and "out" of the screen. 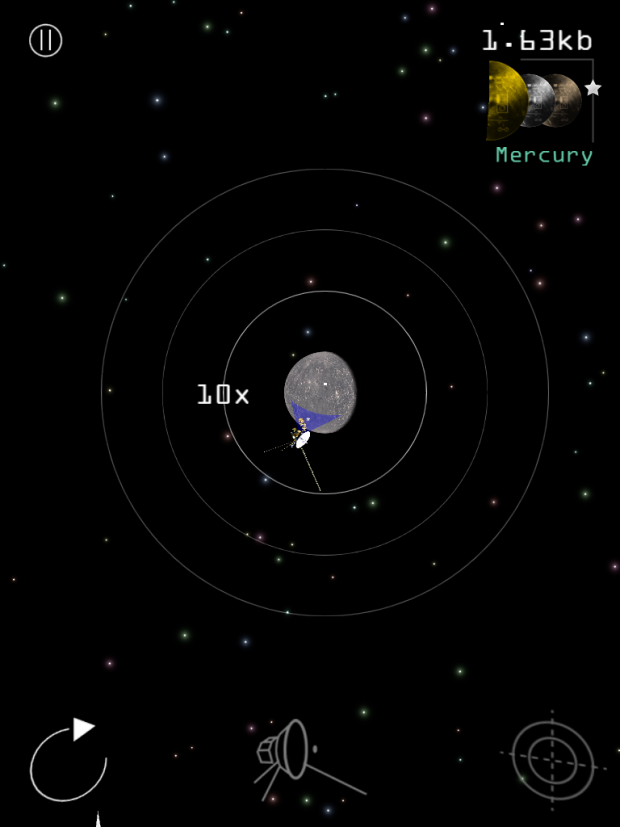 Voyager: Grand Tour is now available on the iTunes App Store, Google Play, and Kindle Appstore as a free, ad-supported download with an optional in-app purchase to go ad-free.

Voyager: Grand Tour has been released on Android platforms, and is now available in the Google Play store and Amazon Appstore!

As part of the process of updating and customizing the game for this release, I added a new feature that is available first for Android users - achievements.

Achievements offer another avenue for rewarding users for trying something different and challenging. There are some for getting 2 stars on a difficult level, some for completionists, and some secrets for particularly noble heroes.

But my favorites are the ones that layer even more authentic detail into the game for space fans like myself. Scanning Pluto is nice, but using New Horizons to do so, the probe actually en route to fly by the dwarf planet in 2015? That's an achievement.

Voyager: Grand Tour is now available on the App Store, and I go into detail about the extra content in the game (and preview the first update).

I would love it on PC. Id play this in a heartbeat if i had a iphone/pad... but i don't. If you gave a pc version though, id d/l for sure!

In addition to the first iOS update, I'm working on Android, Kindle Fire, and PC/Mac/Linux builds. I don't have a clear timeline for when they'll be completed, though.

This game is only for phones? Oh darn. I guess I won't get to play it.

Where would you like to see it? I'm launching on iPhone and iPad first, but after that it's up in the air where I should bring it. Android is the obvious next step, but since it's written in Unity, pretty much any option is on the table.