A voxel based adventure and RPG. Vox is a highly customizable game where you can create, destroy, edit and build anything you desire. The whole world, every item and object within it, and even the characters and inhabitants of Vox are created using a custom 'Voxel Engine' that allows for an unparalleled level of creativity. Come and explore your imagination!

So it has been a long time coming but finally the new update is available to download.

The biggest change to the game is the new HUD/GUI graphics and functionality that should make the game feel totally new and fresh as well as make it easier to understand and more intuative.

The character create screen has also been vastly improved and the ability to modify the scale and offsets of your character parts has been returned: 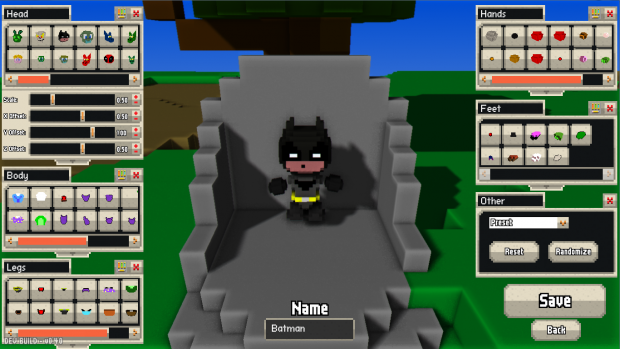 The questing GUI has also been updated to allow you to better see what quests you are currently tracking and also displays any previous quests that you might have completed. 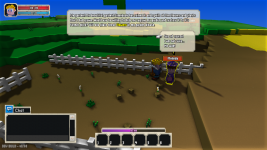 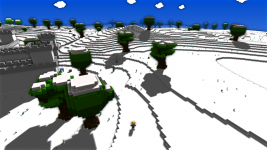 Here is a list of the full patch notes:

That should keep you busy for a while and don't worry, more frequent updates are going to be coming very soon now.

The Prairie Dog Bundle sticks its head out the burrow.

The latest version of Vox is now available both on Desura and also as a new demo version available from IndieDB.

The new update/patch includes head and shoulder items equippable on your characters and also introduces the crafting system.

Another smaller update adding some new functionality and bugfixes.

A quick update to the DEMO to include some critical bugfixes.

New update to the free demo. Lots of cool new features and updates in this version, far too many to list, but some of the highlights include: Map and...

Major rework of the DEMO build of Vox... includes the latest content and bug fixes to give a much better taste of what the full Desura version includes.

Version 0.24 is a smaller update to fix some minor issues, improve performance and generally add a little bit of enhanced combat.

This game works poorly on my mid-end computer. I don't even know if i'm issuing lag. Firstly, the full-screen is just really bad, better get a new fullscreen script/system or wtv. Created a character and a world which i spawned on the surface (for god's sake) but then after clicking forward (W) i got teleported down and seems i got stuck into the nature. Whenever i click an item on the inventory it drops (I don't know if it is supposed to happen but if it is, it's just lame.) Whenever I turn the the character (MouseLook) it just skips like hundred pixels. Not going to review the game by any means since it looks like a pretty cool game to play and probably it's my own issues and the game is in early dev stage. Guess this game is going to shine in the future, at least i hope so. Regards.

You really should try to get a nice Mountain generator going in the world gen :) I feel it's missing lots of hills, mountains and cliffs

ok i got this game on desura.... how do i find the steam key so i can activate it on steam????? does anyone know? please help

I have played the dev builds and see improvement in each release. This game holds the kind of potential to be the kind of game I've always wanted to play, and already has many features of such a game with its large focus on user-created content. I highly recommend trying the pre-alpha or, if you're more interested in waiting for the game to be more "fleshed out" I recommend following its development, rating it up on Greenlight, and following the developer's Youtube channel.