So version 0.19 of Vox has been released on Desura and IndieDB.

Here are the major new features: 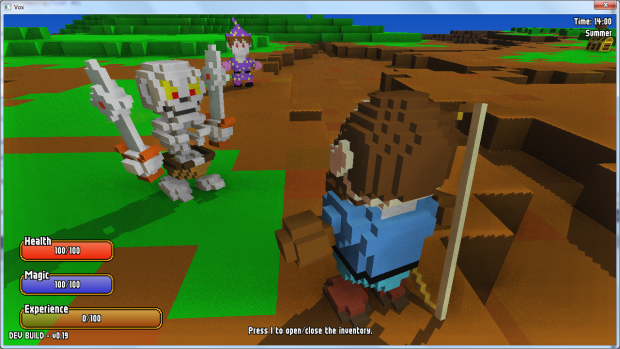 I am going to see how this is received first and take a few days to make sure that there are not any major bugs or really annoying problems that people face. When I put out v0.18 I didnt realise it would be quite so long until I was able to update to v0.19 and there was an annoying graphics bug/crash that actually prevented a lot of people from playing too far into the game (beyond the main menu) and I was in a situation where I couldn't deploy a quickfix since I was already too far ahead into some major changes.

So I will hold off starting anything major for a couple of days just to be sure there are no showstopper bugs present in 0.19, before I get onto the exciting things I have planned for v0.20!

Hello Guys, the game was just released on Steam, do I have to buy this game again , or do i get a Steam key ?!

yeah steam keys would be great for the owners of the game.

i think we´ll never get an answer :o

Hi there. Game was automatically closind. now i cant start it again. i have the paid version. what is the problem there?

Sugestions: Adding Class selection, AZERTY option (Or keybinding) , Mobs Argro on you when getting to close i know its still in early alpha but i do see this game becoming somehing worth it!

I found a bug in the game, where that if you use the fire magic staff thingy alot not just spamming but also if you use it normal it crashes your game randomly.

Hey i like the game but i hate that there is no way of rebinding controlls can you plz add that in its getting on my nervs!

One thing I miss in your game, is the ability to mirror when editing voxels. Like working on the head, if I want my changes to mirror to the other side

when I want to start vox gives me a problem that says so "your graphics card does not support the shader model? requiered solution?

Why is the demo version a higher version number than the paid version? 0.o