Vestige of the Past

Vestige of the Past is a an open world game in which you are exploring an immersive world of alternative presence and trying to survive in an almost familiar but oddly different place. What is behind that contrast between what your eyes are telling you and your gut feeling? Well you will have more pressing matters to worry about at the beginning.

First you will need to learn how to survive and make decisions that you might not be proud of. Or perhaps you will take such decisions you won’t need to be secretive about. It’s all up to you. Either way, you will be the one who will have to deal with the consequences.

The entire world is a sandbox in which you start with nothing. In order to survive and progress in the game, you need to work your way up, using the wide variety of detailed, fun game mechanics and mini-games at your disposal.

You can also immerse yourself in captivating Story mode in which you will uncover the true nature of the world you live in.

For Vestige of the Past we have created a unique city using hand modelled buildings based on their real counterparts in Brno (Czech republic) and its surroundings. We are building the game predominantly on our own assets. Combined with well-planned city layout, this not only creates astonishing atmosphere, but also makes navigating through it a piece of cake. That will come in handy as you will be able to explore many interiors with functioning useful businesses like supermarkets, gas stations, restaurants, auto repair shops and so forth.

Of course all of that is only a background for a vibrant society, much like the real one, and you will need to earn your place in that community. Every character you meet has his own individual set of characteristics which will make each of them unique. You will need to discover and take advantage of who they are in order to build the best possible reputation for yourself. If you do it right, you will get better deals, find more lucrative jobs and be entrusted with complex and interesting quests.

There will be dozens of different career paths for you to chose from. Just for example, you can work:

And much much more...

Survival is not the only important aspect of the game: having fun and expressing yourself are key, too. Therefore we are working hard to create a customization system so you can express yourself in the game. You will be able to equip your home and office, customize your car and, of course, your own character.

What to expect from the full game?

Our current focus is a singleplayer sandbox for Early Access and Story mode for the release version. We would love to prepare a multiplayer gameplay and if the reception of the game is good, we will definitely explore this option.

This is a preliminary list of features we are working on or are planning for the full game at this moment. The list is not final, the lineup of features will be broadened based on the Community’s feedback. Some of the points were described in the Gameplay paragraph. We will make an update later on in which we will describe these points in more detail.

Vestige of the Past is built on the Unreal 4 engine. This allows us to deliver high quality gameplay, graphics and detailed features. 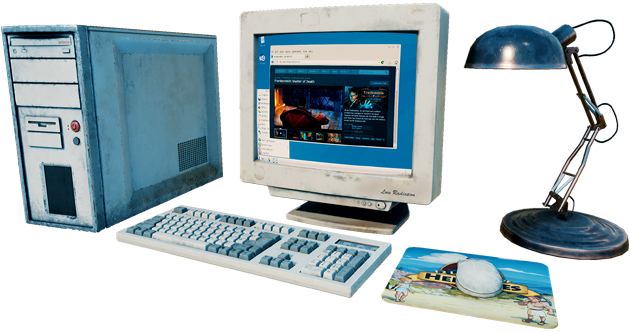 Take pride in being part of the game’s development

We want you to be part of the game’s development! That is why we will be holding polls in which you will decide the direction of the game’s evolution. We already have a sizable chunk of the world prepared and it will be you who will tell us what parts of the map we will be working on next.

And that won’t be the only aspect of the game you can influence. We want the game to be the best possible and we know we can only do this with your help. Therefore, you, our players, will heavily influence Vestige of the Past. How? Simply. We will read all the feedback you send us and implement everything we possibly can.

Take your part in creating something great!

A few words about developers of Vestige of the Past

We are a team of few dedicated indie game developers from Central Europe. Like many other Czech game developers, we are based in the city of Brno. Our first released Indie game was Frankenstein: Master of Death.

In addition to developing games, we are also supporting the growth of Game Development in Brno by organizing a number of different events including Game Access, a successful international developer’s conference in Brno.

As Fineway Studios we are a proud member of GameDev Area.

What is going to be in the Early Access?

We plan to release the Early Access towards the end of Q1 2017.

It will be the Sandbox playground which will offer you a sizable chunk of the map including the poor district, countryside with a dam and a “national park” which is a beautiful enclosed forest full of animals.

Now what can you do there? First of all you can explore every single corner of it - both on foot and in a car. If you do so, you will find a lot of stashes full of interesting loot. That loot will help you survive and find an interesting job in never before seen fast food simulator or as a farmer.

The game will already contain vehicles including traffic, basic leveling system, dynamic items spawning, unique food and drink system, visually evident condition of items including the possibility to check items in your inventory from any angle, full day and night cycle and our intricate temperature system.

How does the alcohol work?

So what were we working on that day? As most of you guessed, it was an alcohol system. We want to approach all these things a bit differently than in most games, so we studied how it works in real life and then transferred it into the game with only a few simplifications.

At the same time, another two processes will start. First, the body will begin to break down the alcohol, so you will be slowly sobering - you will need about 7 hours per promile. Second, dehydration kicks in. From each drink, you will get as much water as you drank, but minus the alcohol content. So if you drank half a liter of 40% vodka, you will only get 0,3 liters of water in your system. And you will dehydrate a lot more, as alcohol has that effect. Depending on the percentage, it might be 1.3 to even 5.3 times the amount of what you drank. That might sound harsh, however you won’t drink a liter of 80% moonshine. And if you do, dehydration will be the least of your problems :)

The current curve in the game is looking like on the picture below and it’s precisely calculated for the respective percentage of alcohol content rather than in steps. The process of dehydration also takes time, you will be dehydrating until your body breaks down all of the alcohol in your blood. 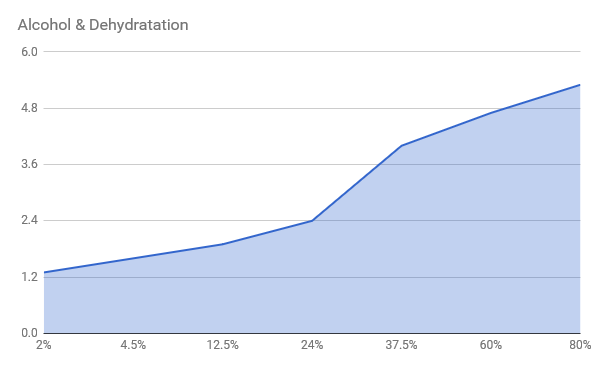 And why should you drink alcohol in the first place, when it has these negative effects? There will be several reasons, actually. Alcohol will be helpful with some of the illnesses and it will even increase your health a bit. Then there will be the social aspect. You will be able to succeed in some conversations better if you will be in “just the right mood” :). And besides, some of the more peculiar characters might not even talk to you if you will be sober. Do you see other cool uses for alcohol in game mechanics? Let us know in our forums!

What you will see in the game will be most probably very different in terms of durations, as it would be very uncomfortable to play couple of in-game hours when everything is swaying around in blurry double vision. You can imagine how difficult it would be to play with something like that from the gif above.

We hope that the you will like this and other mechanics made in the same spirit. Let us know what you think in the discussion. As with everything, we will be closely following your feedback and try to adjust it so it’s the most fun possible.

In the previous blog we’ve answered questions when, why and partly what. Let’s have a look at Pre-Alpha and answer the “what” question in a bit...

Last week we’ve told you about our current situation, today it’s time to say a few words about the Pre-Alpha, the Early Access and the final release.

It’s been a while since the last blog post and there is a good reason for it. Read more about it in this blog.

We've answered your most burning questions in the new section on the game's website.

My bet, the world is a simulation.

Indie
Twitter
Tags
Embed Buttons
Link to Vestige of the Past by selecting a button and using the embed code provided more...

Days After The Storm Adventure