Features
· Fully physically-simulated world of liquid interactions. Experience flowing and splashing water, scalding thick lava, drippy glowing goo, and explosive reactant chemicals, simulated using fluid-dynamics.
· All creatures in the game are composed of simulated liquid, and maintain the fluid's properties and abilities . Collide water creatures with lava creatures to create steam, use creatures made of glowing goo to navigate dark areas, and mix creatures of reactant chemicals to trigger explosions.
· Solve puzzles by combing the unique behavior of each creature with the fluid they're made of. Drop a 'Drinker' Fluro and lure him by spraying goo. Create a 'Dark Fluro' and chase him with light.
· Explore a world of fantastic, detailed machines and strange, wondrous environments. 2D hand-drawn
textures combined with 3D normal maps and lighting creates a unique, other-worldly look to the visuals.
· Gain the powers of the creatures you encounter in the field and apply your discoveries to your next great invention, 'The Accelerator'.

'Vessel' is released on Steam!

After over 3 years of development our liquid physics puzzle game is done and released!

Vessel is a liquid-physics puzzle game that features a fully simulated world including creatures called 'Fluros' that are made entirely out of liquid, retaining all the properties of the material. Puzzles revolve around 'bringing to life' liquid you find in the world and using it to overcome obstacles. It features a 10 song soundtrack by legendary electronica composer Jon Hopkins, dynamically mixed to fit the gameplay.

Vessel can be purchased on our website www.strangeloopgames.com for the discounted launch price of $13.49. You'll receive a DRM free copy of the game, plus a key to unlock on Steam. Alternatively, you can buy the game on Steam directly here, there's also a demo available on the Steam store page.

The game was made by a small team of 4, split across two continents - artists in Brisbane, Australia and programmers/designers in Seattle, USA. We've also had a talented team of 2 contractors dedicated to sound and music on the project.

We're really excited to release the game after so long and see what people think.

It starts in the rain... 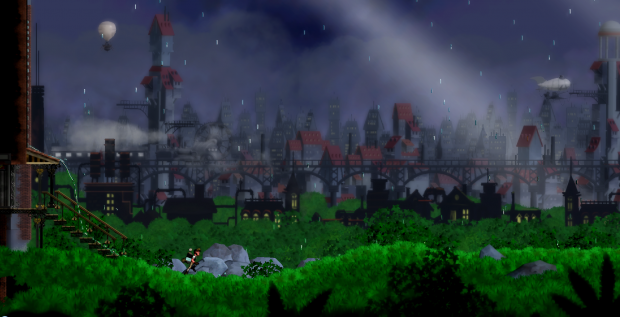 Liquid-physics game Vessel will feature 10 tracks from electronica composer and musician Jon Hopkins. Each track is dynamically mixed in-game based on...

Vessel's launch date has been finalized to March 1st on Steam and StangeLoopGames.com, and we've released two new videos.

Nice. I love liquid physics and steampunk games are especially few and far these days. I'm looking forward to playing this.

Is the title arrived from the fact that a humans body is 60-80% water? Or that the protagonist's invention has their vessel made out of liquid which is the main tool of the game?

Yes, the title is a bit of that. There's a lot of meanings to the word 'Vessel' and all of them fit what we wanted to represent with our game on some level.