V of War, is a Massively multiplayer online shooter game which supports VR and PC players gaming together. Players were put in a sandbox world where the technology is highly developed, especially the communication technology, which enables the human's mind to get into other objects. And scientist utilizes this technology to get into the deep space.

This group of people abandoned their physical body and upload their mind onto a machine like a powerful mecha so that they are able to invade the deep space. The rise of the mecha triggers the conflict with the human being. The war began from then on. Generally, this is a story about combat between mecha and human.

This is a cooperative mode, a squad of VR(mech) and other PC players(human) team up and becomes a "Leviathan". This team unit must cooperate to win. Under this mode, mecha and human support each other by adding more assistant functions to the Leviathan. E.g. mecha becomes the fort battery of human and provides the medical assistant. While human loots material for mech teammates to transform and upgrade. Here need more strategy in a team.

Individual power is the key to win. VR(mecha) and other PC players(human) fight for their own. There will be friends and enemies, but all players shall fight individually. No matter mecha or human they all need to search for resources in game to arm themselves.

Cross-platform Mechanism：Endow PC/VR players with different game roles based on the difference of PC/VR interaction model.

Dev Blog No.3 How to Make a VR Game with no Motion Sickness

When we show the games to the public, we were asked how we deal with the possible motion sickness in our game given the current VR game situation.

Obviously, we are not just commonly VR game.

Firstly, as we have mentioned before, V of war adopts a special VR operation style, in which the handles of VR are set as the control rocker as the mech. Pushing the handles forward to go forward, pushing backward to go backward, flip the handles to level up etc. therefore, we recommend sitting on a chair while playing our game because that best simulates the situation of a mecha. This operation style would mitigate the motion sickness. If you recall your experience while you are driving a car, you shall know what we are talking about. When you in a car, the buildings and scenes pass very quickly, but you won’t feel sick while you are in a car. 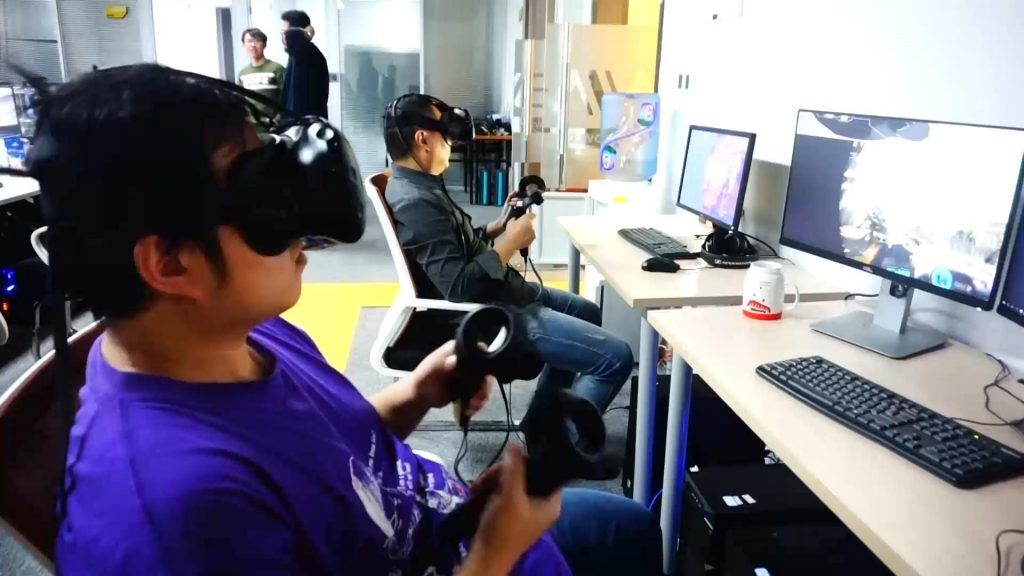 In order to enhance the game experience, we have added a sight channel setting in the game. The sight channel would only appear when the mech is moving, and the faster the mech goes, the fewer scene can be seen. The design reappears the actual sight effect of the movement, that our eyes could somewhat ignore that information that does not fall within the focus area. However in the common design of out VR headset, the detailed image would be presented in whole, and the headset cannot know where our focus point is. It leads to the vertigo of the player because of failing to get the necessary information, and it’s hard to concentrate as well. Many junior VR players suffer from this.

Although the situation is much better in a senior player group, they are not vulnerable to motion sickness. The design of the sight channel much lower the threshold of playing a VR game. Generally, if a player would not get motion sickness when playing a common 3D PC game, there’s a high possibility he/she can just be adapted to our new VR setting in V of War. And we also consider the feeling of the seniors, the sight channels are removable, so don’t worry. 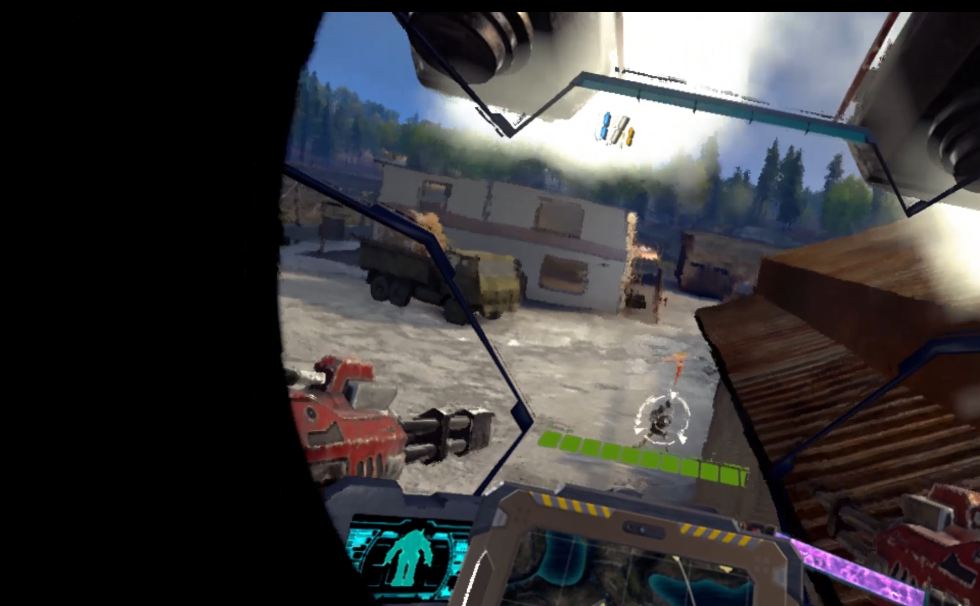 (The black circle is the removable sight channel setting, this pic reflects the image effect in a VR headset while the mech is moving rapidly)

Well, except for the technical innovation, we also made proper adjustment in the map setting, which is smaller than the other typical Battle Royale games. The motion sickness usually comes with the high-speed movement. Therefore, in the experience design of the VR mech, we want to reduce the proportion of pure movement and enhance the VR immersion while the VR player is playing, reducing the motion sickness in this way. 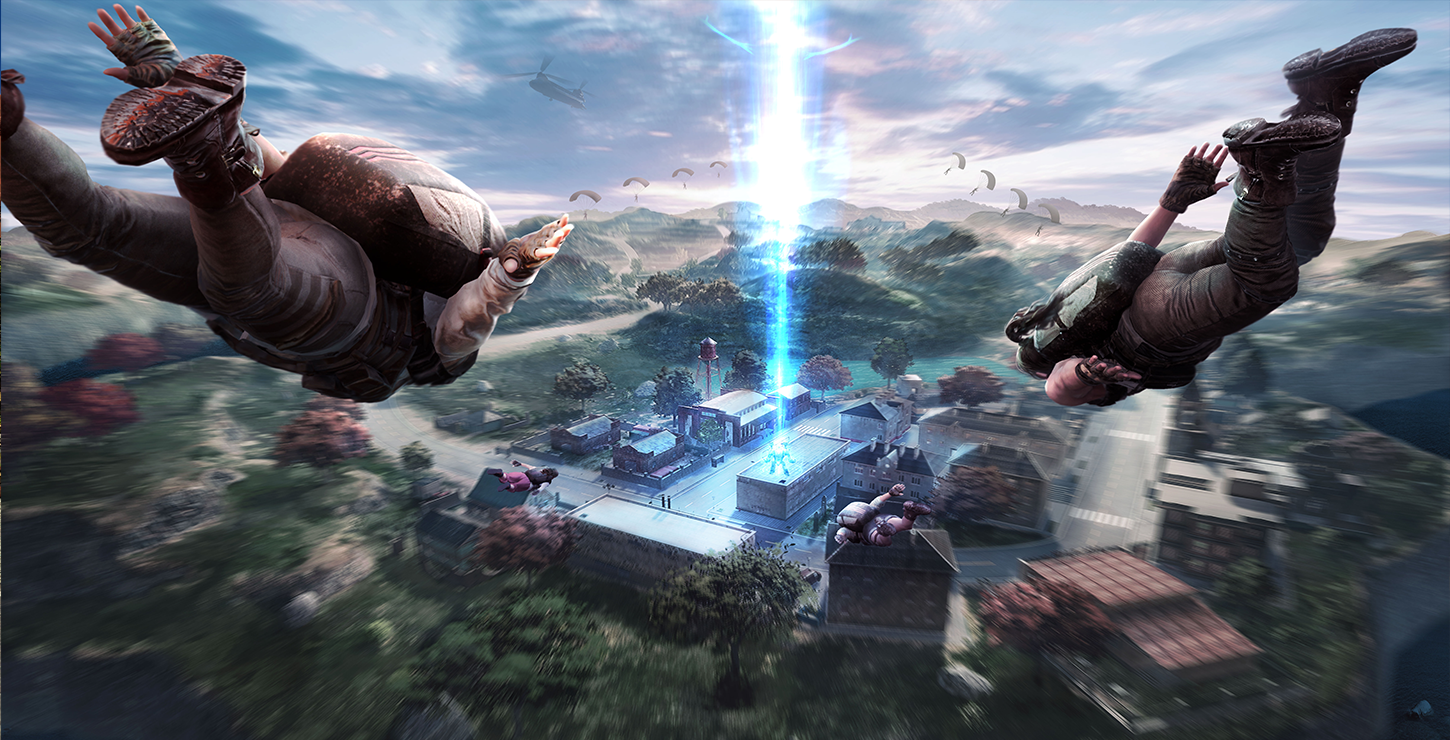 And we have made efforts on the improvement of the frame rate and the game effects, enabling a fast feedback of the operation of the gamer. We tried our best to let our brains believe that we are actually in a mech and driving. Well even though we have cut the size of the map, it is a high volume of workload for a VR game. Would discuss it later in our dev blogs.

Dev Blog 2. Talk Something About The Gameplay

We might be the first ones that managed to find the best proper way to play a VR battle royale game in the market.

Dev Blog 1-A Long Journey Before We Finally Start

After we had that idea, we were very cautious, because there was no precedent in such a field. So we set up a few experimental scenes, and then we discovered...

Let's be honest—the VR market seemed to have reached a lull in its advancement these days mainly due to intense competition from augmented and mixed...

Do you think it is a New VR world?

V of war is a kind of FPS online vr game which is the NINED have concentrated on the next generation science-fiction creations. It can cross platform...

Thanks! This is also a challenge for us to explore VR cross platform. And mech fan here also! We believe Mech will bring more interesting in game and battle between mech and pc. Sounds fresh and interesting right?