In the post-apocalyptic zombified world of "Unliving", you can choose from a number of scenarios to start the game in. From there, you must survive, fight, learn and adapt to the new world, making allies and enemies out of any other survivors. Brutalise and Bully, or clear out sections of the world and defend them, offering a save haven to those who would seek it. The game itself is a user-interface based Rogue game with graphic overhauls to be introduced later on.

Your character now has four movement speeds. Each will effect his chance of being discovered, giving you the advantage of less Zombie Events, but it also takes you longer to look around locations.

The Events Text Feed has had an upgrade so that it allows for more advanced output, such as coloured text! Thank god! The black writing was a wall-of-text on the eyes. It also now includes the time of the event. 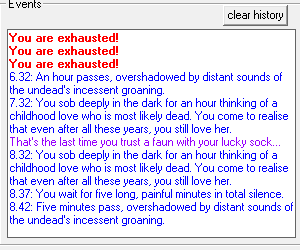 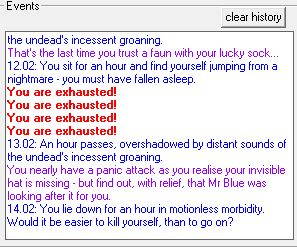 I've added a few placeholder events for waiting for five minutes and waiting for an hour. Some have minor effects on your character, such as falling to sleep for a few minutes, having too much free time to realise what a sorry state you are in, an adrenaline spike from a near-miss, etc.
There are also Insanity events that start to kick in when you've been awake for too long... 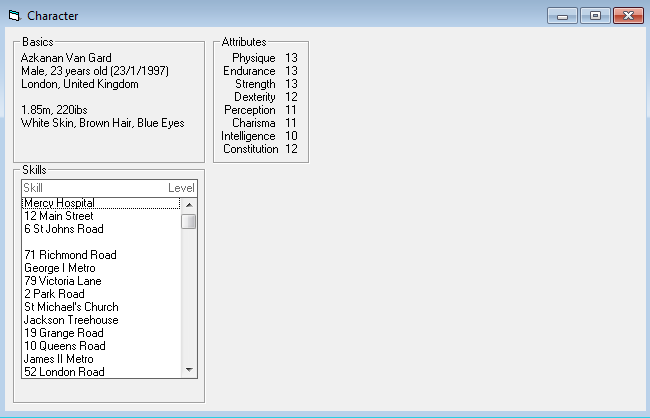 The basics gives information on your character, genetics and citizenship details namely. It also tracks any height, weight and age changes.

Your attributes are now visible! Huzzah! Your age gives and takes attributes. Whilst a 12 year old might not be the strongest or toughest fellow on the block, he's got the natural charisma of a lost child in the zombie apocalypse - aww! :(
Meanwhile, an old man of 80 might have lost his youthful fitness, but he knows a thing or two, which adds to his intelligence.
And then smack bang in the golden age of his age, between 20 and 35, the character gets some slight boosts to physical traits, notably his immune system (Constitution).

Seeing as I haven't implemented any skills yet, I've simply used this to list the first area's locations for testing purposes - but here, you can see addresses of houses, apartments and other such residential areas, as well as a couple of metros, a church and a treehouse. And of course, Mercy Hospital, which is always generated as it is during the "Hospital start".

The Character Sheet is still being developed, so I've left this area for later on.

I've also been rewriting the World Gen system, Now, locations will be generated to be far more original from one another, as opposed to before where they were actually quite similar.

Every settlement (Metropolis, City, Town, Village) is generated on an even ID, whilst countrysides are generated on odd IDs. (That is, "Area 1" = Settlement, "Area 2" = Countryside, "Area 3" = Settlement, etc).
However, there's also a 1-in-5 chance of a settlement area (An even ID) being countryside.
All Areas are generated with a "maximum locations" variable, and each area will be limited to certain locations... so we won't be seeing Skyscrapers in a sleepy 50-building village any more!
In addition to this, I'm also going to be messing with a metro system. In the metro, you'll be able to find "Metro maps" that unlock every other metro station in the system that you can travel directly to via walking the tracks. Expect the eventfulness of this to be a mix between Left 4 Dead's "The Subway" chapter and Fallout 3's abandoned rail systems.

In generation a "Location" is given a Size, a quantity of floors and an "area space". The Area Space is the location's (Size * Floors). The size is generally how large a location's X*Y is (think of a field, or a level in a house), then the floors multiply that. From this I can balance out how long it would take a player to explore one location in relativity to another. For example, a skyscraper might be smaller in size from a factory, but the skyscraper would have many, many more floors.

Meanwhile, Rural settings will be made up of far fewer locations that are much larger, such as woodlands, hills, lakes, highways, mountains, farms and so forth.

Quickly going over the Combat Minigame and its future version plans and what's next on the road for Unliving!

The Combat Minigame is a sub-section of the main game itself. Once this is at a decent level of bug-free capability and a high enough level of enjoyment...

This is the [very buggy] early release of the combat screen for randomly generated hordes. You will need to use CTRL ALT DLT (Task Manager) to close the...

This is the [very buggy] early release of the combat screen for randomly generated hordes. You will need to use CTRL ALT DLT (Task Manager) to close the...

My birthday is on the 18th of February, would make a nice birthday present XDD (im not forcing or telling you or anything to release this on 18th - Take your time and have fun devving it)