Trajectory is a first person scifi adventure game that takes place in Earth's orbit, with a dystopian yet whimsical setting. The game has multiple endings and a variety of exotic locations.

In Trajectory, the player assumes the role of an inmate of undisclosed background who is completing the last few days of their sentence aboard a prison vessel that is owned by a clandestine, quasi­-governmental agency called Orbitek.

During each playthrough, the player experiences the last few days of the prisoner's sentence in orbit. The prisoner performs his daily routines onboard the vessel and follows the orders of an Orbitek warden given through an intercom. That is of course, if you choose to follow them. The missions vary greatly from general maintenance tasks to daring and valorous exploits! In between them, the player can explore the inmate module he is trapped in. The game has many varying endings and with each playthrough, the experience differs.

Trajectory's universe is futuristic, yet anachronistic. Floppy disks are still in use, flight trajectories are displayed in ascii graphics and text adventure mini games abound. The game is humorous in tone, but has a solid, consistent atmosphere and a background story which can be sought out through exploration and collectibles like lost journal entries or computer logs.

It is up to the player to determine how his sentence will end and explore a number of exotic locations on earth, in orbit, and even beyond!

Inmate, only few days remain. Be sure to spend them wisely!

Trajectory is now available with our latest adventure game A Collection of Bad Moments in a 20% discount bundle!

ACOBM is an adventure game where the player is thrown in various through situations which they must figure out in order to survive bu using their wits! 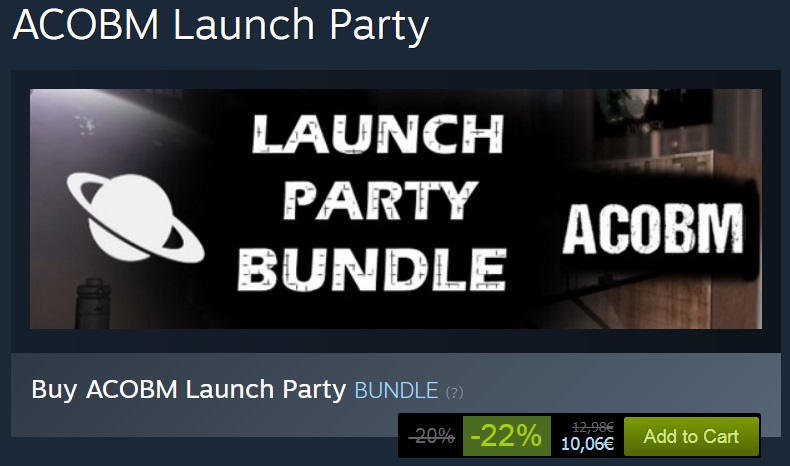 A Collection of Bad Moments & Discount

Hi! We are pleased to announce a new game A Collection of Bad Moments. To celebrate this, Trajectory will shortly be on a discount!

Hi! Trading Cards have been added to Trajectory and the game is now half price on Steam Summer Sale!

Trajectory has been released on Steam for less than 10$!