One after the other, prominent bankers, lawyers and politicians are being killed in a succession of brutal murders. A serial killer has emerged from the shadows but remains elusive and furtive, stealthily avoiding arrest while leaving cryptic clues for anyone who has the mind to tackle them.

Journalist Horace Emerson is assigned to cover the unspeakable crimes in the hope that he can solve the puzzle. However, he soon finds that the killer shows a special interest in his journalistic work. Will Horace be able to solve the mystery before the murderer finds him, or will a more sinister entity, surfacing from Horace's past mean even more danger for the people of London?

This point-and-click psychological thriller is set amidst the fog and grime of Victorian London accompanied by sublime pixel-art and augmented by a stunning musical score from a renowned composer.

Published:
TBD - expected release in Q2 2018. Demo available soon.
The Sixteenth Promise will be released on every major online game distributor for PC, Mac and Linux.

Today, I can finally release the long-awaited cover art of the game!

Here it is! Enjoy: 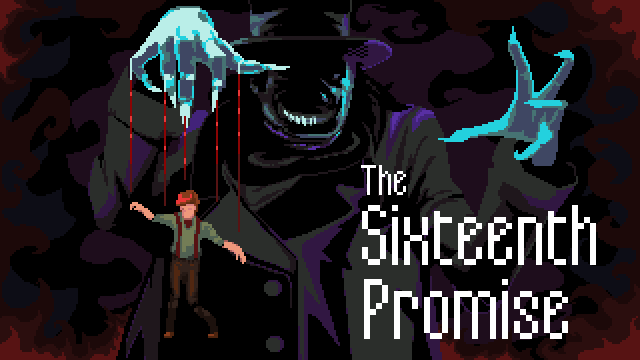 There will be approximately 15 to 20 characters in this game, each with their own unique style and composure. The character walking animations are made of eight frames each, only going in the directions of north-east, north-west, south-east and south-west. Below is a GIF preview of what it would look like:

The game is coming together quite nicely, and there might be a playable demo coming up in the next two or three weeks, I hope. The demo will only feature the starting area with a few character interactions, music, sound effects and some other good bits and pieces.

If you have any opinions of the demo, you have the chance to influence it! If you think something shouldn't be in the game or if there's anything you'd change, give me your thoughts and I'll be sure to do the best I can to improve the game :)

Tags
Embed Buttons
Link to The Sixteenth Promise by selecting a button and using the embed code provided more...

Two Nights at Larry's (A FNaF Fangame) Point and Click