*FEATURES*
- PLAY OFFLINE, no connection required
- Amazing minimal visuals!
- 6 Leaderboards and 30+ achievements to compete with your friends!
- One-gesture super intense gameplay! Tap to jump and avoid the dark matter!
- ONLY Rewarded Ads, you will never see an AD, if you don't want!
- IAP focused on Collectibles and bonuses. No pay to play!
- Easy to play, hard to master
- Original Soundtrack and SFX composed by Victor Love
- Amazing lowpoly and minimal visuals
- Endless universe generation
- 20+ playable and collectible characters. More added monthly!
- Lots of bonuses, each with a different effect to help you survive. Learn to master them!
- Smooth performances even on old devices!
- '80s coin-ups super amazing mood

The Dark Matter - Release and Kickstarter for powerup 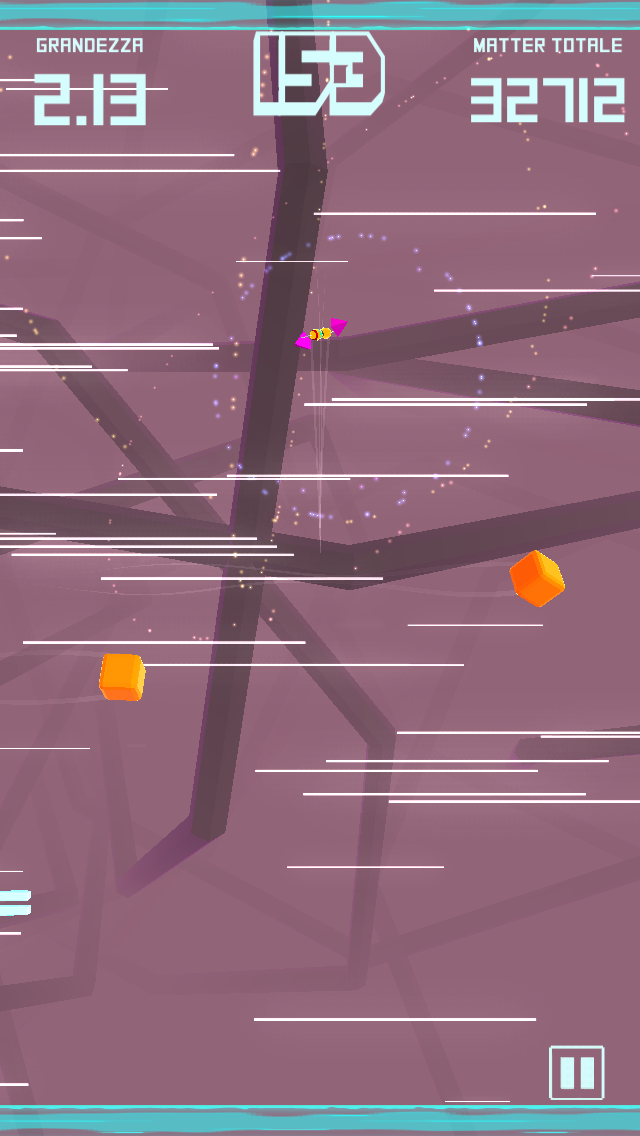 The road of an indie developer is always very hard: no exposure, lot of effort to spend without money back, nights awake coding. But there's also the excitement when a project is complete, and you find it awesome.

This is the case of The Dark Matter, which we are soon releasing on iOS.

Here's our KickStarter: we decided to push the game to a next level, adding multiplayer, new worlds, new enemies, and lot of stuff! Go check it out! ->DISCOVER OUR SUPER CAMPAIGN

The Studio and The Decision

The studio was creating 360 experiences 1 year ago, and games for clients. You know, developing a game for a client sounds cool, but is horrible, because most of the time you're debating with wrong design choices. Anyway, the job collapsed because we had no new contracts, so we were really struggling about what to do. We decided to unite all our efforts and develop something easy but exciting, something with amazing visuals but without the need of 1 year of modeling, something hard but easy to play with.

The Dark Matter borns here, in the prayers and the nightlifeworking of a team of 4 trying to survive creating what the team thinks is a product which could be an hit.

You are a Microcell, in a microcosm. The Dark Matter is devouring the universe, and you have to survive, making use of bonuses, strategy, reflexes and fast thinking.

The Dark Matter is what any Arcade lover wants: a continue and compelling challenge, rewarding, endless, with a strong and solid inspiration from oldschool arcade games. It is a classic sidescroll platform, with flappy controls and waves of enemies, with a constantly changing environments. The game has wide range of enemy AIs and behaviours, and everything scrolls smooth during the experience: you'll start sofly while the game gets harder and harder and new enemies make their entrance in the scene.

It's addicting, the team finds it addicting while instead most of the time we hate what we create ( you know, spending lot of hours on a work, makes you hate the work! ), we hope the community will find it addicting.

We banned any AD if not the rewarded ones, which we think are GREAT. You can anyway play the game and watch no ad while playing, if you choose not.
IAP is very soft, with bonuses to start your game a bit easier. Character ( which are nearly 30 today ) have to be unlocked with boxes you find while playing, so IAP wont be focused on this, for your happiness!

Hope we can have a trip togheter

As Project Manager, Lead Designer and Dev for The Dark Matter, i really hope the community appreciate the game. Users can have a beta on Preapps, don't hesitate to check it out and give out feedbacks!