You awaken to a world engulfed by death and disease, with very few signs of life. You look around to see the damage that has been done. The Elven Sages had foreseen that you would awaken to stop the blight - but you were too late. The forests have become filled with diseased creatures and infested artifacts of a ruined civilization, a civilization you used to be a part of... You quickly come to your senses and ready your weapon, remembering your vow to protect and restore the sacred Elven Forests for all of eternity.

Customize your loadout prior to each match by choosing a class, a weapon, and a set of 10 abilities. There are two caster classes: Wizards and Druids; and two melee classes: Rogues and Clerics.

As the head developer, I have always been a fan of games that offer the player many ways to progress and customize their character, and even more importantly: games that offer a lot to do after you've progressed your character. As with any game that has a level-up system, there will always be a point where players hit the maximum level.

After hitting the level cap, players will gain access to hidden areas of each survival campaign, offering new objectives and bosses that are not available to players who are still leveling up. Additionally, players can compete in casual or ranked PvP scenarios.

Choose a class and create a customized load-out and see how long you can survive while exploring the Afflicted Elven forests! Enemies will continue to spawn in waves, getting stronger every round. However the waves of enemies are not the primary focus - while surviving is important, players will also be left to explore and discover many new weapons, spells, and items by completing formal quests as well as hidden objectives exclusive to each survival map. At the end of each match, players will be rewarded gold and extra experience based on how many waves they survived.

We are currently working on two Survival Campaign Maps to showcase in our Early Access phase:

Enter into a battle to the death alone or with a team, and fight to be the last team standing! Arena maps are much smaller than other maps.

Survival war is almost identical to the normal Survival Campaign, except there's another team of players on the other side of the map to compete with. Work to find and eliminate the other team's base camp to prevent them from re-spawning in order to win the match! After your team has won, you may choose to carry on with the game as a normal survival campaign, or exit the match to claim your winnings immediately.

Join a large team and battle the enemy team for control of the objective! Battleground scenarios include objectives such as capture the flag, king of the hill, and last man standing.

We put some short game-play clips together for an official trailer. Let us know what you think!

There are still some improvements to be made to our animations (especially for the player's character) and the graphics, but we are excited to share our progress and hear your feedback thus far!

An overlook of some new features we've been working on over the past few months. We're also preparing to run our final phase of Beta testing through Steam...

Information about the combat and customization mechanics, as well as the main game mode: Survival Campaigns (co-op and solo).

Have you thought about moving it to a newer engine? Possibly unreal engine? As well as bringing on someone for UI/in game graphics? I know a guy who could do the ui and in game graphics. His website is dreamerdesigns.live. But yeah the game has lots of potential I just think the engine will hold it back. 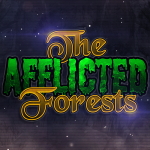 Twitter
Tags
Embed Buttons
Link to The Afflicted Forests by selecting a button and using the embed code provided more...

There Was a Dream Adventure