Story:
It all began in CST Railway Station. The attacks, which drew widespread condemnation across the world, began on 26 November 2008 killing at least 173 people and wounding at least 308.

Two hotels, were amongst the four locations targeted. The terrorists are still infiltrated into the hotel kept many hostages and are firing rapidly. Now, it is your job as a NSG commando to neutralize those terrorists, defuse the bombs and rescue the hostages.

UTV IndiaGames Ltd. released the game for free. We made up our mind to keep this game free because this game is a tribute to all those people who lost their lives in 26-11 mumbai terror attacks and the ones who fought with brutality.

We have made with game as a tribute to people who lost their lives and the ones who fought with brutality in the 26/11 attack in Mumbai, India, 2008. It is completely free to download and play. 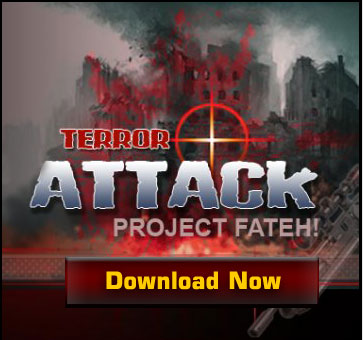 Check out Terror Attack: Project Fateh's mobile version, developed by UTV IndiaGames Ltd. Become an NSG Commando and end the tragic horror in Mumbai!
This game takes you back to the catastrophic event of the 26th November 2008, when the metropolitan city of Mumbai, India, is terrorized by infiltration at one of the heritage hotels. Innocent people have lost their lives and many held as hostages. It is your objective to neutralize these terrorists by any means possible.

Get Terror Attack for Mobile

Many of you have reported that you can't play the game. Please check that if your computer meet the system requirements before downloading or rating the...

BIG NEWS: The long wait is Over! The Game is Released!

Bring your dekstop to life. Use our cool Terror Attack: Project Fateh wallpapers to bring the real action to your dekstop.

Can i say one thing? I REALLY LOVE THIS! yea, it might not be perfect, but that doesnt matter. it's good. definitely better than what i could do. and i also now have the motivation to make a game.

terrorism worldwide is not about religion..
its about terrorists who have small winkles and who feel inadequate.

They should be armed but with the Tavor instead of those M4s
bah who cares?i'll be keeping an eye on this one!

is this game released on the itouch?

Whens this coming out?