Tanks VR is a multiplayer VR tank simulator set in the events of World War II. Immerse yourself in engaging battles with other players and see them react to your maneuvers. The intuitive controls allow you to operate a tank on your own. Pick a tank from your garage and use it to fight for the axis or allies in battles with up to 10 players. The Tanks VR development team is ambitious and planning to add many more features after release such as AI, tank customization and a progression system. More tanks, maps and gamemodes are also planned to be added.

Physical lobbies
We wanted to improve the VR experience, so the lobby screen in the garage has been removed. Instead of the lobby screen, a lobby now consists of physical rooms. When you join a lobby now, each team will have their own room in a bunker, where players are placed around a large round table. In the middle of the table is a large tactical map that can be used to organize the upcoming battle. See the screenshot below.

Discuss battle tactics with your teammates

Each player has a microphone in front of them, which activates when speaking into it. This will transmit the player's voice to loudspeakers in the room of the enemy team. This way, you'll still be able to communicate with the enemy team. A small red light on top of the microphone will light up when it is activated, so you'll know if your voice is being transmitted. That way you know when your battle tactics are being discussed in private. See the gifs below.

Communicate with the enemy team using the microphone

Improved UI
We want Tanks VR to be a single-button seated-only VR game. Previously the touchpad was used to navigate within the garage, this has now been removed. The entire game can now be played using only the trigger. Recentering can be done using the menu button. The player is now seated in the middle of the garage with a desk in front of them that has two papers laid out on it.

One of these papers is the lobby browser, and the other is the 'tank depot'. The tank depot is used to select tanks and it shows important information about each tank in the game. In the lobby, the player has the lobby menu and the tank depot is laid out as papers in front of them. This way, the player can still change their tank selection. When pointing your hand towards one of these menu's, a pointer becomes visible. The trigger can then be used to press buttons, see the gif below.

Select tanks and learn more about them using the tank depot

We decided to give more priority to fundamental features of the game. You can see that we have put the bots, physical lobbies, a UI overhaul and HMD support in phase #1 of the development. By implementing these features first, we don't have to mess around much with the UI or lobbies when we want to add new stuff.

Oculus devkit
We have finally received our Oculus devkit. So we can start working on adding Oculus support. We also got a bunch of other stuff, such as a glass, a jacket and even got an Oculus Go. 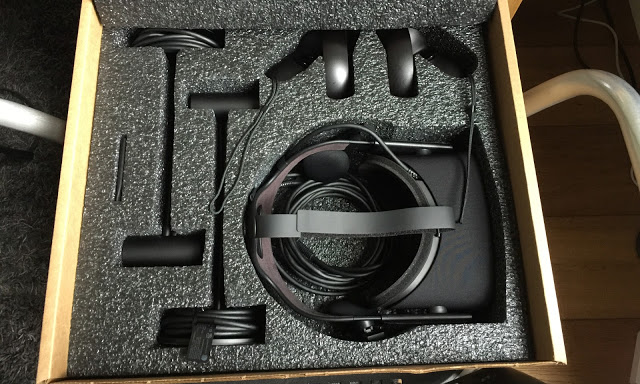 We received our Oculus dev kit!

Coming up
The bots are being worked on. They will come, it simply takes time! We will finally set up the Oculus and WMR and try to get some official Oculus and WMR support for the game, which we haven’t had the chance to do yet. We'll also be improving the tank UI based on your feedback. Improving the tank UI also includes laying some groundwork for component damage and team comms

Changelog
From now on we're going to include a changelog with each update-related devlog. Here is the changelog of the this update.

The past month has been work-intensive for us, which is why we haven't had the time to write a devlog until now. We got delayed by a rewrite of the backend...

Tanks VR currently offers only a relatively simple city map. Most players will rush to the middle of the map and trade shots with the enemies. Or take...

In the previous devlog we talked about implementing 3D in-game voice chat in a large content update. Due to various requests to implement it sooner, we...