Survivor Squad is a Strategy Action game where you control a Squad of up to four survivors and guide them through a highly randomized world looking for supplies to aid you on your journey.

Scavenge for supplies in every corner of every building, craft your gear, pick your skills and loadout while keeping your Squad alive by covering every corner and moving as a group.

It is a game that encourages quick thinking and fast paced play since you need to pay attention to all of your squad mates. If you leave someone behind, chances are they will be pounced on and die. Move as a Squad and cover every corner.

Lots of new content in this update, 3 New Gauntlets in total!

Developer Gauntlet: Survivors Vs Zombies, Defend 4 lanes from Infected by placing and upgrading your Survivors while calling in Air Strikes! It's a completely different game mode which is another great example of the power of the Editor 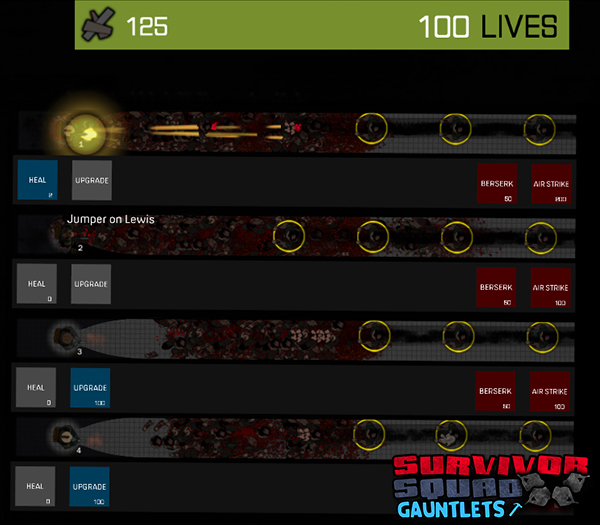 Featured Community Gauntlet: Safe Haven, The camp has been breached, find a way to escape!
Built by ToxicPenguin 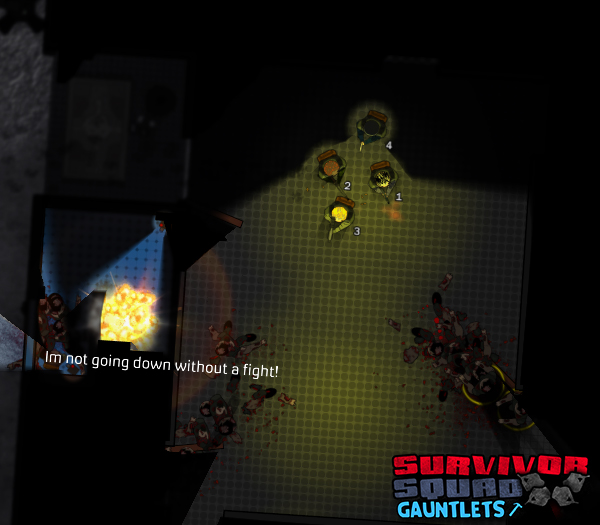 Featured Community Gauntlet: The Complex, Navigate the compound and get to the extraction whilst fighting hundreds of enemies! There are special Infected everywhere so cover your corners and keep moving!
Built by Master Chief 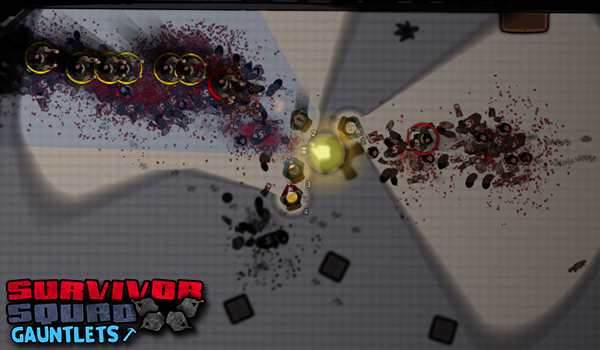 Survivor Squad now has Multiplayer and is available on Mac!

Survivor Squad is now available on Mac and version 1.06 will be released today which features various fixes and a brand new Multiplayer mode.

Survivor Squad getting Multiplayer next week!

Update 1.06 will be released next week and it will add a very interesting Multiplayer mode along with various other improvements.

Survivor Squad will be released on Desura on June 6th at 7pm CST!

I have released a Gameplay video, it is a playthrough of the Death Lab game mode.

The trailer sums up why this game is awesome. 4 person squad that you take with you to clear buildings from zombies, total awesomeness!

But... The game isn't complete yet. It's not even close. And they don't reply to any questions, bug reports or anything. Looks like they got their money and ran off like so many indie dev's nowadays.

Update:
I made a huge bug report topic where I posted every bug I could find over a month ago. I also sent them an official bug report using the form they made for it. Then after not hearing anything from them I sent them an e-mail asking wether or not they were ever going to finish the game. They responded that it's done in their eyes. Everybody who has ever played this game disagrees. I guess they just confirmed that they took our money and then ran off.
Do not support these developers!

There should be a site to list all those bs indie games whose devs are simply lazy.

Please someone help me.. i have a desura cd-key and i dont know how to activate it

on the very bottom of this page in the blue section on of the links says "gift" click it and redeem the key as a gift.

i bought this game..can i get steam key?

I got a steam-key, but i want it on desura!! Any way to do this?

If you wish, we can change us key, i give you desura key and you give me steam key :) contact me please

Is the demo the same build as the normal version?
Demo is still a bit iffy when it comes to movement and survivor AI so I'm not a 100% sure whether or not I will like the endproduct.
If the demo is an old build I'm sure it will be better by now...

I have the paid version and I can say that it is buggy. Not only the survivors forget to defend themselves from time to time and turn when not expected, but some items and even rescuable survivors get stuck in a wall.

(Also will the game run smoother? @ 1024*786 at lowest settings the framerate when moving camera is about 0,6 fps)

Good fun if a little bit repetative and buggy.