The retro arcade action Tank 'em Up! We combined a Beat 'em Up with a Shoot 'em Up and added tanks! SUPER TANK WARS!! was inspired by the console and arcade games that dominated the gaming world from 1991 to 1994. We stayed true to the era by designing our game with intuitive gameplay and tons of action!

Our goal with SUPER TANK WARS!! is to capture the essence of games you know and love like Streetfighter or Bomberman. This means a game you can play just a couple of matches at a time or enjoy playing it for hours. You’ll be able to pick up the controls quickly and easily the first time you play, but rich tactical gameplay will continue to challenge veteran players who want to truly master their favorite Commander/Tank combination. Let the Super Tank Wars begin!

The game is currently somewhere between Pre-Alpha and Alpha. We decided to bring SUPER TANK WARS!! to Desura because we want to bring it to you as an “ALPHAFUNDING Game”. This means that your voice can be heard and can help guide the development of the game! Because the game is currently in an early stage of development, all in-game images and gameplay footage are not finalized. The marketing suits told us not to go to the public unless our product was ready, but we hate listening to suits; We prefer listening to YOUR feedback instead!

We are also currently on Steam Greenlight - please vote for us!! (more info on Steam further down below) 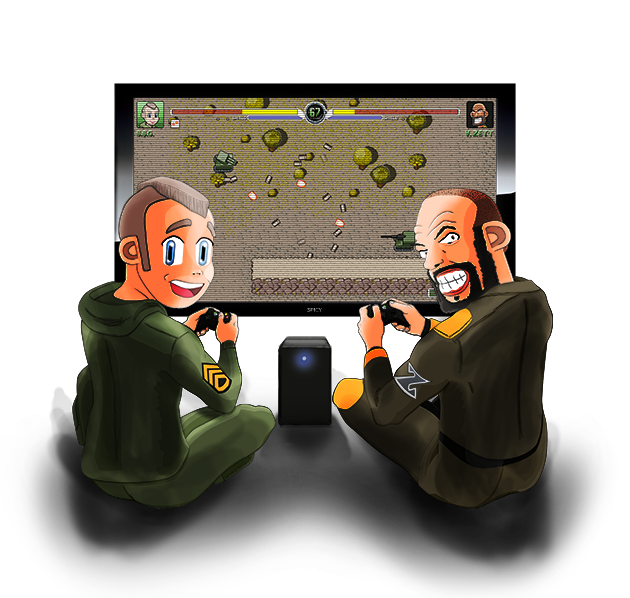 SUPER TANK WARS!! is the latest Tank ‘em Up from HOT ‘n SPICY Games. The evil General Alistair von Zett has abducted the world’s leaders and is threatening to execute them! The best tank fighters in the world must gather and defeat the general by challenging him and his army of rogues and mercenaries to an all-out tank war! This game features fast-paced retro arcade action and a 2-player design that makes it perfect for battling with friends! SUPER TANK WARS!! will also include a deep, immersive story mode that delves into war, peace, love, hate, friendship and loss.

SUPER TANK WARS!! was designed with controllers in mind and comes with full controller support. We want to bring you that console experience – get your buddies, hit the couch, tank away and just have a good time! The “console experience” idea is the reason we’re also aiming to support the upcoming SteamOS with a native version. In the meantime, you can enjoy SUPER TANK WARS!! in Steam's "Big Picture" mode.


SUPER TANK WARS!! is currently still in development. We’d love to let you help shape the future development of the game with Desura's “ALPHAFUNDING”. While the game is being developed, we will constantly be uploading new builds for you to play! We’ll be adding new content, fixing bugs, and making other changes as we go. With “ALPHAFUNDING” not only do you receive the game at a fraction of the final sales cost, you also have an opportunity to help make the game better with your feedback!

The plan is to start development with “Versus Mode” (that’s the 90s term for “local multiplayer” for any whippersnappers in the crowd) because we believe this mode is the heart and soul of the game. Once “Versus Mode” has been completed, we’ll focus on bringing you an extensive single-player “Story Mode”. This mode will feature storylines for each of the 18 playable characters.

We are now gearing to prepare the first "ALPHAFUNDING" version for Desura. Also, we are on Steam Greenlight as we want to release SUPER TANK WARS!! on Steam as an "Early Access Game", too. That means that we need your vote! Show your support for SUPER TANK WARS!! by voting for us today! Once we’re greenlit, we will able to publish the game on Valve’s Steam service and set up “Early Access”, all thanks to you! Needless to say that every Desura customer will get a free Steam key, if we are successful in our endeavour.

"What about online multiplayer? A Mac port? Linux version?"

You may be interested in seeing a Mac port for SUPER TANK WARS!! This is likely to happen if there is a demand for it. If you want to see a Mac version of the game, be sure to make your voice heard!

Linux will come sooner or later, since we are definitely planning a native SteamOS version along with the standard Windows Desktop version.

SUPER TANK WARS!! is the debut game of German independent game development micro-studio HOT ‘n SPICY Games, founded in 2012 by self-taught artist and game designer Alex Ziska on his 30th birthday. We are making games in the spirit of the 8 to 32-Bit eras and add our very own hot and spicy seasoning. We love 2D graphics. We love pixels. And we strongly believe that it’s the gameplay that matters. Our goal is to become a renowned brand for awesome 2D games. You are welcome to reach out to us on Facebook or Twitter - the links are on our website over at www.hot-n-spicy-games.com 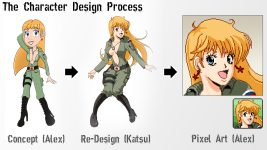 While working on the game, we are growing the team. Our newest addition is our mysterious Manga artist Kai, also known under the pseudonym 'Katsu'. He will take care of turning character concepts into fully-fledged manga illustrations which then, in turn, are turned into Pixel Art for the game. So, to make it clear, all character portraits you've seen in the screenshots so far are only placeholders. But here is a nice sample of the quality you can expect from the finished game.

STW!! coming to Desura and is now on Steam Greenlight

We are currently gearing towards finishing a first "Alphafunding" version, which we want to show the people over at Desura. Also, we are now on Steam...

These Is Sony Playstation 2 And Sega Dreamcast Version?