Single and multiplayer game where you play as Sumo Wrestlers in the form of blocks. Try to push each other out of the ring to win the match!

Media will be produced throughout the entirety of the project.
We will also be uploading any materials we're using and tutorials will be posted for you to be able to follow our progress even closer!
You will be able to find the current state of the game by clicking here.

Thanks for voting and helping SumoBlocks on it's quest to become the 2022 Indie of the Year. You are now in with a chance to score some free games. Help this game secure more votes by embedding the widget (or link) we have included below on your favorite sites.

I think it's time to officially announce SumoBlocks... 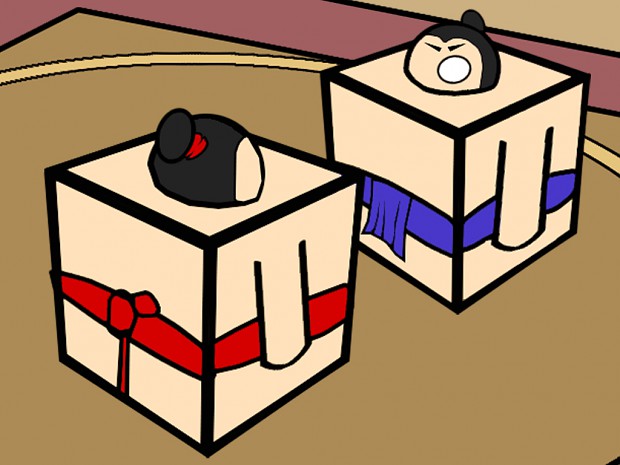 SumoBlocks is a project based on improving the team's development skills within the Unity game engine. We had first started to convert the Community-Based Project's game engine from RPG Maker VX to Unity as it offered us so many more benefits to what we wanted to produce as a final game. Our lack of knowledge within the engine grounded our production to a halt. The new team's objective is now to get to grips with Unity, and to understand how the engine and the scripting behind game development works.

SumoBlocks is the first project in which we will be learning the engine with. There will most likely be a few more projects along the way so we can increase our understanding of Unity, but don't be expecting anything just yet.

The project has not long started development, so only in its early stages. Media will be constantly published on the SumoBlocks IndieDB profile such as screenshots and usable materials. A constant update of the game will be posted within the Public area of my DropBox account. You can find that link again, on the SumoBlocks IndieDB profile's description.

You can also join along side the team with the tutorials that I will be posting. There will be complete beginner's guides to creating SumoBlocks so that developers of any level can follow the production of SumoBlocks easily. You will be able to find them in the Tutorials section on the SumoBlocks IndieDB profile.

A quick tutorial letting you know how to import models into Unity and how to set the Collider Meshes of the model enabling them to realistically collide...

How to create a multiplayer game in Unity, where all players use the same keyboard. Including beginner's help.

The second part of a series of tutorials explaining the basics of Unity. In this episode we look at how to create objects in the scene.

The first part of a series of tutorials explaining the basics of Unity. Here we look at where to get Unity, learning the user-interface, and where we...

lol this is a laugh maker :P .. tracking

lol this is a laugh maker :P .. tracking

i think i just realized my dream...I wanna be a sumo! It looks great guys, can't wait till release =D

will have something nice for you soon =P

looool
This is looking really fantastic!