Thanks for voting and helping Stones Chersonese on it's quest to become the 2022 Indie of the Year. You are now in with a chance to score some free games. Help this game secure more votes by embedding the widget (or link) we have included below on your favorite sites.

A few words about my project.

Hello. That's decided to show everyone his second project. I'm new, so not much criticize me. I'm sharing it on the game engine Unity3D v2.6. But before we talk about the project, I want to tell you that I knowEnglish very bad, unfortunately, I do not live in the U.S. Sorry if I made ​​a mistake.Now about the project itself. It is named «Stones Chersonese». It may seem that the name is a mistake, it actually is, that's justmade ​​it, I specifically. In this game you move a block of stone from one place to another, but the thing is blocks can only move in one direction.
Place in the game - a city of Hersonissos. This is my homeland.Now the city is completely destroyed.
There will be three card designs that are separated by thirty levels.That is, for ten levels of the design. The first ten - Chersonese at a time when it was built (ie the usual village), the second dozen -Hersonissos forces at dawn (the present city Hellenistic period), the third - the period of oblivion, is the period in which the Chersonesenow (the collapsed buildings, etc . etc.).

Today did not do much, basically now trying to add all sorts of thingsout there and liven up a level to give it beauty. Today worked onfood tent, it is ready in half. 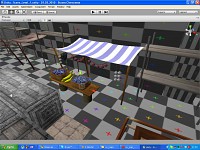 Hi, any news on this game ?