In 1986, the world's worst nuclear disaster occurred at the Chernobyl power station. Soviet authorities established a 30km 'Exclusion Zone' around this nuclear wasteland, but in 2006 a second explosion rocked the stricken reactor, obliterating all living things and causing the Zone's boundaries to ripple outwards. From this epicenter came waves of mutated creatures, deadly radiation, and a strange, anomalous energy. The Zone was cordoned off by the military, who would shoot on sight anyone foolish enough to brave the horrors within. 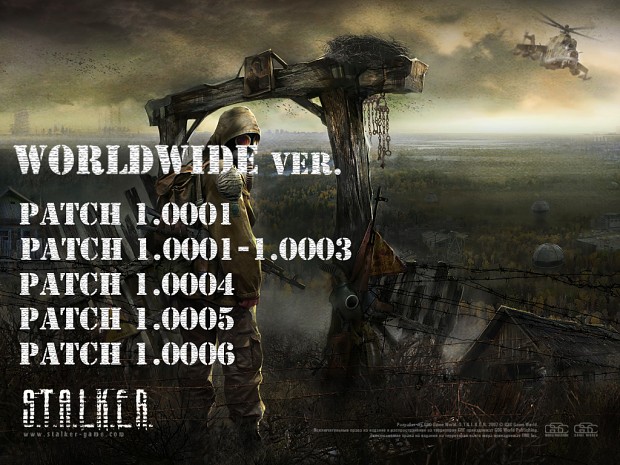 What type of patches UK and/or US can use?

If you follow the link it shows a selection of WW and US patches, The US patches are the ones for the US and UK market,
Stalker.gamefront.com

The patches include older patches so you do not need to use earlier patches first, you can go straight to patch 1,0004, 1,0005 or 1,0006 depending on the mod you plan on using with the install (I've never had issues doing that).

I don't think there's any mods relevant today that are built on older than 1,0004.

It's good to have all the patches safely stashed away, I have all the ones available for all the STALKER games. WW, US and RUS.

Nasha, you are a big credit to the stalker community!

hey thanks alot mate im about to start the series on my windows tablet, running flawless so far any ideas what gun mods to get for soc ??????? dan.uk

It's nice to have. I have one of those mods which require 06, and this is the first zip which contains that patch.

This is patch for worldwide version. I don't think that it makes any difference whether it's us or ww version for installing mods.

Start Regedit by pressing Win+R, typing "regedit" word without quotes, navigate in registry to the path: HKEY_LOCAL_MACHINE \ SOFTWARE \ GSC Game World \ STALKER-SHOC (for Windows Vista/7/8 x64 version, this path will be HKEY_LOCAL_MACHINE \ SOFTWARE \ Wow6432Node\ GSC Game World \ STALKER-SHOC ), there you find the option named "InstallVers". Its value is must be 1.0006 - change it to the 1.0004
And than just run patch 1.0005 again

You sir, are a legend! Always good to have them stashed away :)
Many thanks!

The patch program is unable to find an installation of my game :(

How to patch the steam version?