Complete different objectives, fight and defeat various enemies, get the best equipment for your spell master and develop many of his skills. Learn new magical spells or create your own, reinforce the already learned magical spells to become the most powerful and the greatest Spell Master! Develop your magician, do tasks for the supply of resources, hire builders to construct your own magical academy! It will allow you to prepare adherents of any magical school, form troops of battle magicians and draw masters for making magical discoveries that will be useful while traveling. 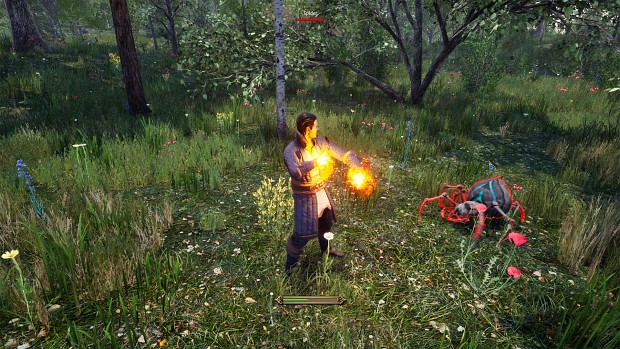 The year is almost over and I would like to tell you some things about the current state of the developing of Spell Master: The Saga. We were working on the game day to day throughout the year. New people have been joining us and that’s why we can finally prepare the game to the release. The game level is almost ready. There are a lot of locations with secrets and hiding places. And it takes long to explore them all.

A lot of systems have been implemented. Now players can architect buildings in the academy and perform tasks which are connected with the construction activity. After building the academy players can collect resources, hire students and teach them for obtaining professional job. Further they will make a useful contribution to society and the player. In other words, the academy has a strong impact on everyday activity of the player.

The game world is alive! Now there are a lot of NPCs in the game. All of them are doing their own things. Someone works, someone idle. At night they sleep in their homes or take rest by the camp fire. But they never walk or leave the settlement at this dark time. Night is very dangerous. It’s monster’s time.

At the moment we are preparing the game for release in early access in Steam. And now it’s time to show the gameplay. Soon we will download the preview of the game. So you can see everything for yourself!

Indie
Tags
Embed Buttons
Link to SpellMaster: The Saga by selecting a button and using the embed code provided more...