Space Wave is an Arcade vertical scrolling shooter inspired by old school games, where player only targets on the best score and how far he reaches.

This game offers an easy and intuitive gameplay, following a quick-play philosophy which as soon as the game starts, brings you to action without disturbing introductions.

Fully integrated with Google Play Services, you'll be able to unlock a great variety of achievements and different leaderboards where you can leave your mark. Will you claim yourself as the number one of the Arcade machines? 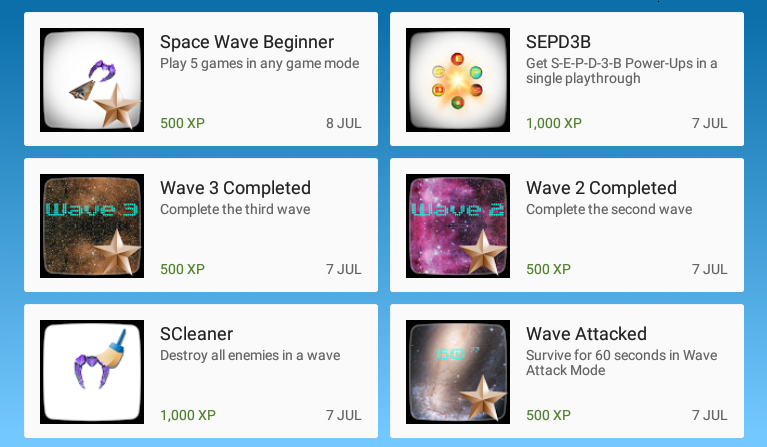 The score and the color of the achievement (bronze, silver, gold and platinum),
tells how difficult supposed to obtain it.

There are different leaderboards to show how skillful you are apart of the highscores.

Although your energy regenerates automatically, before each wave you will go through an asteroid rain will help you to recover strengths.
In Space Wave, all enemies have a chance* of dropping items will allow you recovering and increasing your score, and also Power-Ups will improve your attack capacities temporally.
*Dropping change is doubled if your watch an advertisement before the game starts.

Apart of the normal game mode, you can prove your skills in the Wave Attack mode, where you'll fight against an infinite enemy wave.

In the normal game mode, you'll travel through different waves, but there are two hidden bonus waves where you can access if you achieve certain goals in certain waves. Bonus waves will boost your score in an important manner, so once you discover how to access to the, don't leave them to scape!

And once you beat the 10 waves, will the game finish? Of course not, following the Arcade essence, the game will continue from the first level, but enemies will be tougher.
How far do you think you think you can get?

In the Space Wave official website, accessible from the game main menu, you'll find more information about the game and current championships, and also access to the leaderboards and the hall of fame, where the champions of each month will be exposed until posterity. Do you think you can leave your best mark?

To promote Space Wave and grow its popularity (top games), use the embed code provided on your homepage, blog, forums and elsewhere you desire. Or try our widget.

Hope you enjoy it! Go for the best score!

A re-imagined version of the classic Asteroids® as a single or local multiplayer shooter. Dodge and strafe your way to victory against insurmountable...

Break into spaceships!Fly your pod up to any spaceship in the galaxy and dock with its airlock to sneak inside. From there, you've got to sneak up on...

Erupting from the shackles of your prison, you are an Overlord. An ancient life form of immeasurable power who seeks revenge against the evil Kesedihan...

Infinistate is a hybrid arcade shooter that generates levels procedurally so that each play through is unique. As the player takes control of various...

In Rogue Invader, YOU are the invader attacking the alien horde in this genre-flipping roguelite shooter. Game-play resembles 1-Bit black and white old-school...