Slinki is a hard-as-nails 2.5D action-platformer with a unique weapon - Use your own arm as a bladed projectile that always returns to you or push a button and propel yourself towards it instead. In the wake of the calamity that befell the forest he called home, strange things have happened to the small bunny known as Slinki. Changed, he must now rely on his mobility, your wit, and the boomerang-like bladed metal appendage that once used to be his arm, in his endeavour: To reach the sickened heart of his once peaceful Wood and end it's suffering.

Are we there yet?

Well, I've gotten a bit lost on what's changed, actually, but here's the gist of it:

To live or not to live

The lives system is now nearly implemented. Unless something apocalyptic happens, in the final versions you'll start off with some amount of lives. Dying will place you at the last Monolith you touched. Lose all lives and you get the privilege of starting the game from scratch :) Losing a life will also make you lose any accumulated points, if you're into that.

We've been to Microsoft's Game Dev Camp at Lisbon and showcased a hastily put together demo. Unfortunately it was a buggy mess but you can see this for yourself in the latest video:

Yeah it's a buggy mess. We did however learn a few things from playtesting, like increasing radius for attaching the boomerang into surfaces, and narrowing the grates a bit, so it's not as easy to grab them at an undesired point.

Grabbing surfaces was highly polished and now looks incredibly smoother (no more twitching directly into a wall for instance).

Nuno (that's the other half of the programming department) also assures me enemies will soon stop digging into the ground in terror as they see Slinki approach.

Oh yeah and here's the money shot: the nearly done geometry and placing for Level 1! 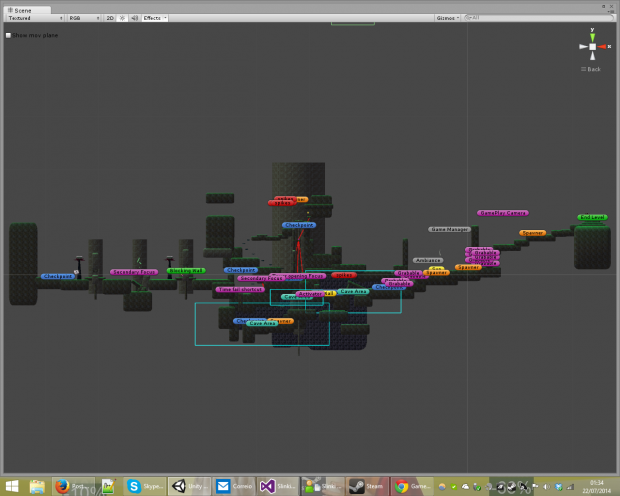 Sorry IndieDB, we won't let you down again

I won't lie, we've been neglecting Slinki's presence in IndieDB. To be entirely honest it's mostly due to the fact the few glimmers of free time I've...

In this update: What we've been up to this month. Whatever happened to Brian Storm? New Alpha coming soon!

Why We Use Fmod in our Game

In this article, we briefly explain why we opted to use Fmod Studio.

Making a good camera that behaves nicely was a lot more work than we anticipated but I think the results were worth it.