Shh,Zombies is a puzzle game where users must get their character (Jim) to the safe house. Purple monkey dishwasher.

A summary of 'Shh,Zombies', a link to the playable prototype (with 5 levels) and the current features of the prototype.

Shh,Zombies has been in development for a little while now, I'm working on it (almost) on my own and in my spare time. It's had several playable updates, from the very early tech demo/ prototype using Unity primitives for characters and the environment, to what we have now - a prototype with 5 levels, two difficulty modes and assets that are close to final. 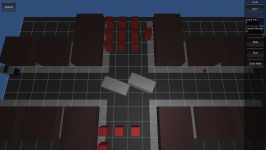 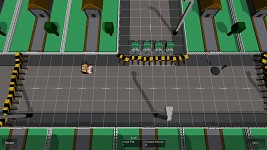 Shh,Zombies Features:
This list is the target features to be implemented into the game for release, or as free updates after release.

Game Modes - There will be two game modes, normal puzzle mode and trivia mode. The normal puzzle mode will have two difficulties, "Normal" and "Hard". Normal is set during the day time, with a few enemies and daylight, where as Hard will be set at night time. Hard is unlocked after completing levels on Normal, and is played at night time - only artificial light (eg: lampposts), darker levels and more enemies.

Trivia mode poses you, the player, a question, the answer to which will always be numerical, this value then tells you how many waypoints must be used to complete the level.

Environment Themes - The current levels are set in a rural/ small town, as more levels are added the plan is to have a loose progression making the way into a city, through more densely populated areas, train stations, military bases, airports, golf courses, and a harbour - all with unique environmental dangers, allowing you to use as a tool to distract or kill the enemies, but be careful, they'll be dangerous to Jim too!

If you have any ideas/ suggestions on environments and unique dangers you'd like to see in Shh,Zombies, please feel free to let me know!

Community Levels - I plan on taking puzzle (level) submissions from players, a simple drawing or something whipped up in an art package to get across the idea. I will then develop the better ones and include them in Shh,Zombies (as free updates) - credit will obviously be given and these levels will go in a section clearly marked as "Community Levels". Throughout the year I'll be looking for holiday themed submissions, to go along with official (paid for) levels.

I hope to make this a much better process in the future, but for now, drawings will have to suffice! Hell, if you have an idea already, feel free to send it my way!

Prototype
So, I bet you'd love to try out what's already available and offer some awesome feedback! Well, here comes the link, but first some things:

And there we have it, please take a gander at the prototype here and feel free to send me a message with any feedback at all - I'd love to hear if you enjoyed it, but equally if you didn't enjoy it (please offer some reasons why you didn't!) and anything else you'd like to add - I'm really open to hearing your thoughts!