ShardWars:Bendaria is at its core a ccRPG (Classic Computer Role Playing Game). It borrows features from the ‘good old time’ RPG's, from rogue-likes (randomness) and modern games (GUI, Interface, Concepts). The aim is to create a game where each new start of a game provides different challenge but the actions to beat the game are predictable based on the skills your character develops and the decisions you take. The key features are as follows: * classical step-wise First Person perspective *flexibel character development * tactical turn based combat * party-based (4 characters based on 6 races and 8 classes) * development of the characters: 15% race/class based - 25% item based - 60% skill based actions * a GUI design to be easily portable to as many plattforms as possible * crafting your own equipment * a living world - actions performed by the party are recognized to a certain extend by the world * randomly generated world each time a new game is generated * 10 different faction

Thanks for voting and helping ShardWars:Bendaria on it's quest to become the 2022 Indie of the Year. You are now in with a chance to score some free games. Help this game secure more votes by embedding the widget (or link) we have included below on your favorite sites.

Combat mechanics - a look into the current WIP

As mentioned before, one of the next important milestone for the game are the combat mechanics.

Today, I want to show the current progress and what will still to come. As a picture says more than 1000 words, lets start with it first:

ScreenShot of the current Work In Progress: 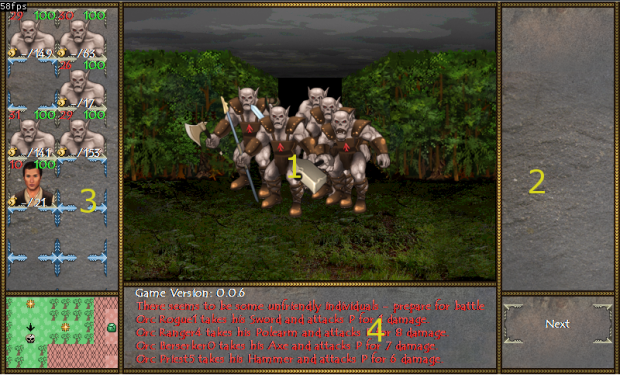 (1) Center Screen: In the center of the screen you will have a 3D view of the surrounding and the encounter party. As mentioned before, I have a favor for the old classical RPG's like Wizardry or Might&Magic and I want to keep that style.

(2) Right Tab: In the screenshot it is currently empty, but as soon as one of your character has his turn all the possible options are listed there. I will come to this topic in a second.

(4) Text Tab: On this part the progress of the battle can be followed

Combat in ShardWars Bendaria will be solved using a turn-based approach.
Each character has a speed value which determines when he is allowed to choose what he wants to do. This speed value is translated to 'Tickers' which are a sort of countdown. As soon as an character's ticker hits 0 she or he performs an action or can choose her/his next steps.
In the screenshot below you can see a clock with some piece of text on the bottom of the character portrait:

The first value is the action ticker, the second the recovery ticker. Several of the options your going to choose from are not executed within the same time its your turn but need some preparation time. Think of an aimed shot or a wall of fire. As a dumb of rule, the more devasting the action performed, the longer it will take until it is executed. This should provide some additional depth to the battle system - a mage trying to cast his most critical spell to whip your whole party only to be killed in the final seconds.
The second value is the recovery ticker. As soon as it is reaching zero, the combatant can plan his next steps. Again this ticker depends on the action choosen.

Each type of weapon and the actions will have a distance modifier. This means, trying to attack with a dagger from the rear row with an normal attack will most probably doing any harm. Moving your party members out of range or into range will play a role as well as the actions choosen. Taking a rogue with an high skill level in shadowing gets the option to sneak behind the enemy rows and put his dagger in the neck of the mage. But again - this is not instant and will cost some time to execute. In the meantime, the enemy may have the chance to kill the rogue beforehand.

Items play a role - but not to prominently

Items playing a role as they provide the basics for your damage or armor ratings. Some of the more rare items even can increase your skill or your basic stats - which then again increases your skills as they are based the basic stats. The damage or armor rating will only be slightly increasing as they go up in quality - the main driver you want to seek for better loot will be that they provide a better speed modifier as they are easier to swing or lighter to wear.

As mentioned, the equipment only provides the basic values. What you do with them depends heavily on your skills you develop and how you develop. The different skill level will unlock more and more options inside and outside of the combat. Additionally, the skill lvl will determine if you are sucessfull or not. There is no random roll implemented but a simple comparision check. Each item to identify or craft will have a difficulty level - if your skill level is higher your successfull. The same goes for combat - if your weapon skill is higher than your opponents defense skill, your successfull.

It's not the end

Hope you enjoyed the current explanation of the underlying system I want to have in the game. As it is current work in progress there is still the possibility that some pieces will be changed, but the core values will stay the same.

As an additional teaser, I want to show 2 of the other factions in the game: 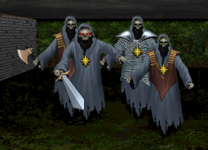 Say hello to the ghosts 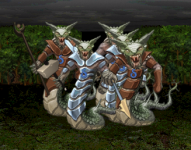 Naggas are may not the friendly neighbors

As the game has been newly added to the IndieDB I want to provide some thoughts on the game and what I want to achieve with it.