Shard Hero is an action-platformer game, located in a fantasy world. Game is focused on challenging, but interesting and enjoyable mechanics. Players have to beat few different worlds, each of them having set of levels, where only few random of them appears on the way to final target. Every time players attempts to complete the same world again, they get slighty different experience. Players are also able to unlock various weapons that won't only grant higher damage, but also utilities and passive effects that might come in handy to overcome encounters.

Today I decided on writing a bit more about level mechanics. I keep talking about little bits of it, about challenge and so on, but I never really just explained it straight forward. I would also like to hear people’s opinions about it.

Everything in project started with the idea of making game that in a way would be like Spelunky. If you don’t know that game - it’s a platformer where you have to complete all levels in one run, without dying, and every time you die and start over again, you get different levels ( there is of course more, I suggest you should find it out by yourself on their page ). Of course, I didn’t want to make the exact copy, or "extended" version. My game was supposed to be more like dynamic platformer, being more forgiving for made mistakes, but still giving a bit of challenge on each step.
I also decided on having map editor rather than randomly generated levels. They still have a bit of randomness inside, but it’s more of visual thing ( did you notice dwarves having different colours of clothes each time? ).

The very first idea of one "attempt" at game was a map that had 79 randomly-picked levels + boss level. Player would pick their way to boss level, having to beat 15 other levels on the way. I still have a picture of that idea: 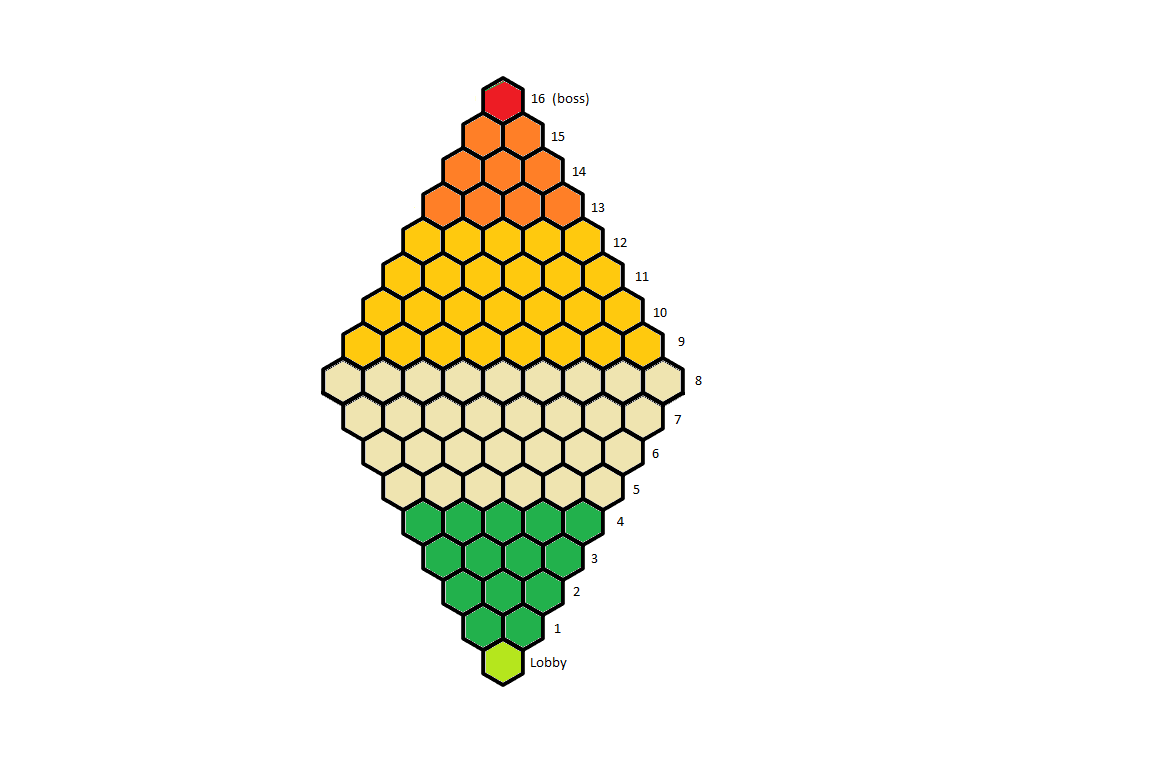 I started to see some problems in it when I thought about the story. I thought of multiple bosses being a thing, but then there is just one boss level that is always there. At some point I decided on having one shop in "lobby" map, rather than little shops spread across world ( I talked more about shop system in previous post).

I needed something new…

My current idea is to divide game into worlds. Each "attempt" will be trying to finish a single world. Each of worlds will have different bosses, different levels and different challenges. 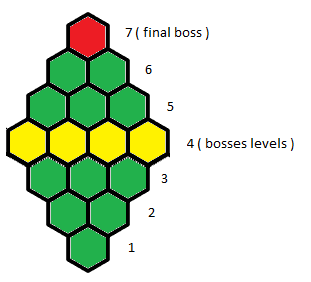 I plan on 7 levels per gameplay, where 4th level will always be one of fixed bosses ( in earlier version I planned mini-bosses to be just random levels, a chance was that player would never do one ).

Each of green levels will be picked randomly and have one of few possible targets. It might be just finding a key and exit, it might be having to capture few points or defend someone. I will talk more about it in the future!

Further worlds will become harder, and you might need to prepare for them before going in!

Thanks to worlds, I will be able to keep story telling stable on boss levels, while also being able to create as many possible levels as I desire.

I would love to hear what people think about it. Is this idea better or worse? Maybe there is something you would like to see in a different way? Share your thoughts with me! :)

"Today I would like to talk a bit about shop system for the game. Then I will move to new weapons I created. Last part of post will be about close future...