The original idea is coming from Wendell Hicken's Scorched Earth. He called it as "The Mother of all Games" and released it in 1991. My father loved that game so much that he played it every single day for years.

With recreating this game I am paying my tribute to Wendell's work and devoting my time for my father's memory.

The version 1.4 is on its way to you and it holds a few hopefully exciting improvements beyond ironing out the wrinkles of the last release.

First of all the accidental clicks on levels have been sorted. You can discover the whole map with confidence, you will not start a battle unwittingly.

The biggest change on Map is that the level limit hase been removed. You can play as much and as long as you like. I never thought that anyone would go beyond 170, but there was an obvious need so here you are.

An other change is that the little tank that shows the position on Map is not a static prop anymore. It follows your movement on map.

I’ve already got questions regarding the stars above the levels on Map, and indeed their meaning was not too obvious. The stars belong to challanges and the first challenge that has been introduced was the Time Challenge - how quickly you can finish a battle. It has got a few mates now: Ammo Challenge - use only a limited number of ammunition; Collect Challenge - collect boxes; Survive Challenge - survive for a time; Destroy Challenge - destroy a special object on the battle ground;

and Multiplayer Challenge. This last one has not implemented fully. Basically it is a Time Challenge, but the players will be other human players - but not in this release.

We have a few score boards throughout the game. You can compete with other players on daily and weekly scores, two hugely popular races, and also every level has got its own winners. We have a Best Battle competition as well, though it is a bit meaningless as it is hard to compare two different battles. I removed this competition and introduced a new one - Best Fighters. 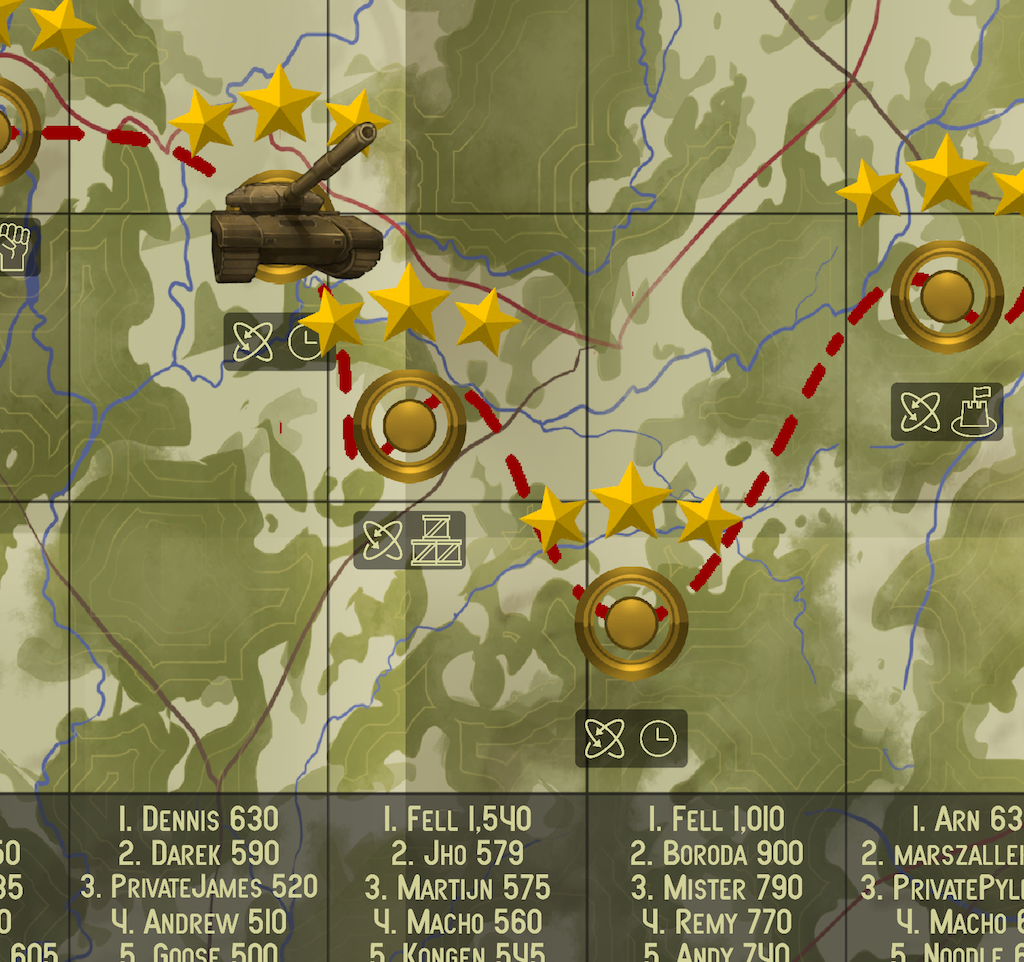 Best Fighters competition is aggregating the overall achievements over every rank and announces the top 3 winners, giving them a gold, a silver and a bronze medal.

On iOS and Android

Scorched has been released at App Store and Google Play

An update regarding the status of the development.

An introduction about the game, what is it and how you can play it.

The game has been released on App Store for iOS and Google Play for Android. This is still the core version, fully playable but there will be 2 further games built above, the Battlefield and the Arena. Please check the website for the details: www.purplehead.uk

Hi guys,
I can't put up the demo for public yet, but I give access happily to anybody who wants to look into it and promise me to give some feedback (it would be good to hear somebody else's opinion).
Please send an email to tester.sc@purplehead.uk and let me know what sort of computer you have. I can offer tested versions for Windows and Mac, and I have an untested Linux version. I also can invite you for a closed testing on iPad (through TestFlight).

Can't wait. I played the original. And I'm playing Pocket Tanks for iOS too right now.

Thanks, I hope you will enjoy it. The first demo is going to be out very soon.