Remnants: Fragments Of The Past

Whether you seek glory, power or peace, you have come to the land of Ashdeen.
The land that decades ago was the center of a great conflict between The imperium and the Orcish hordes.
When men first came to Ashdeen it belonged to Orcs, Goblins, Trolls and the greenskin like.
Humans came in search of fabled artifacts once belonging to an ancient race that lived below the ground.
Orcs were enraged that humans came to their lands claiming the artifacts for their own use. War was declared!
Fierce bloody battles were waged, but none could really claim to be the victor.
An uneasy peace Was signed between the humans and the greenskins, and now all the races of Ashdeen live in a fragile peace governed by orcs and humans.
Now the efforts are once again focused on excavating the ruins of the ancient civilization that had vanished so long ago.
Powerful artifacts, strange ruins and forgotten languages are discovered during the first expeditions.
Elves and a few other races fear that there is something sinister in the depths, and further expeditions should be stopped.
But who knows what will be found amongst the fragments of the past...

Remnants: Fragments Of The Past is an CRPG that I have been working on for over a year.
It's currently going through alpha testing and hopefully soon so that you can test it your self.

Forum is now up, so you can ask any questions you have there

Update 8.9.2012
-loot tables improved again
-New types of chest sprites
( and you now know from chest appearance if it might contain better loot )
-Fixed issue with no rings or amulets dropping from chests

Update 7.7.2012
-Made a portrait for fire mage
-Updated old character portrait graphics
-Nade some newtiles and the like

Update 2.7.2012 ( sorry for the lack of updates, I have been chilling. Its summer you know =D )
- New wand skill: powerblast
- New tiles
- Improved Effects for few things, like radiation

Update 18.6.2012
-Infinite hunt quests (finally got it working) you can take hunts from Wulf at Kerim.
(in hunts you hunt amount of creatures within certain time to get a reward)
can only be done once in 14 days

Update 31.5.2012
(Final countdown update before Alpha2 test version )
-Lots of new npc:s and vendors
-Bounty hunter paladins might come after you if you have too much bounty on your head
-Fixes to rogue mode
-Fixes to sneaking
-More tips to tutorial
-2 New ores, thou they only give crowns now when mined

-Open world, huge world map to explore
-Day,night and weather effects, snowing and raining affect accuracy and many other aspects like resistances, water slows you down and it's har to see enemies in the dark as it lowers detection range
-Tutorial: Game has a short tutorial which will be improved later on
-Crafting: craft drinkable and throwable potions like: holy water, poison bomb, healing potion, mana potion,... craft bombs from gunpowder keggs
-Intelligent AI: enemies cast spells, use
potions, use ranged and if you are too close melee weapons, open doors,
patrol areas, set traps, chase you if they see you, run away if they are weak...
-28 Character classes to choose from like: Trolls, Orcs, Humans, Vampires, Ghouls, Goblins, Half-Ogres, Elfs, Dwarfs....
-Character classes actually play differently: Vampires use health as mana and drain life, Ogres have a rage meter, dryads have poison attacks, dwarves can use runes... etc
-26 Spells like: Fire breathing, tangling vines, holy bolt, acid arrow, bless, fear, ring of fire.... and more to come
-Lots of combat skills like, set trap, piercing strike, ghost run, quick stabb, etc...
-Other abilities: first aid, tinkering, spot, etc...
-Randomization: Items and dungeon objects are randomized, you never know whats inside a chest or whats waiting behind a corner.
-About 1000 weapon variations ( including: Bows, Crossbows, Axes, Swords, Daggers, Hammers, trowing weapons, magic wands, runes,... )
-Other gear ( armors, potions, scrolls, shields, helmets, boots, rings, amulets etc... )
-Many Different enemies ( skeletons, slimes, spiders, ghosts, shadows, bandits, beetles, bats, lizardmen, branchlings, revenants, balongs, mummies, orcs... )
-Enemies have variations like: skeleton mage, skeleton warrior, orc archer, orc warrior, vampire bat, cave bat, Kohra, Balong... many variations each...
-Minibosses: Randomly generated enemy minibosses
-Random map encounters: swamp areas, forest, snow covered areas... etc
-Sight: You cant see enemies unless they
are in your sight, you can hear enemies behind the walls or sometimes
behind you then they are indicated with an question mark,
-Hidden areas, Secret doors, buried treasure, hidden traps,
-Food: You need food for resting, be warned thou some food can be rotten or mouldy
-Inventory: sell items in towns, carry extra stuff, potion slots and stack etc..
-Minigames: Dice game to be playd in taverns, gauntlet to compete in and a game modes Zombie arena and Rogue!
-Traits: If you want you can choose a trait in the beginning to further modify your character
-You can save and load your game
-Autosave
-Many towns
-Many different shops ( taverns, blacksmiths, alchemist, chapel, etc... )
-Many places to visit, dungeons, ruins, graveyards, cities, villages, caves,...
-You can level up and train your skills, 8 different magic skills and 8 other skills
-Quests
-Traps: bear traps, fire traps, saw blades, ballistas, fire spinners... etc
-interactive world: Doors can be broken,
torches lit or put out, switches turn on and off with arrows, objects
can be set on fire, set oil to fire and watch enemies burn, chests can be bashed... many
things...

About the new engine

Sorry for being away form this project for a while. As some of you might know I said I would make a new engine for this game and post pictures once I have something else to show than different colored geometric shapes well today is the day. 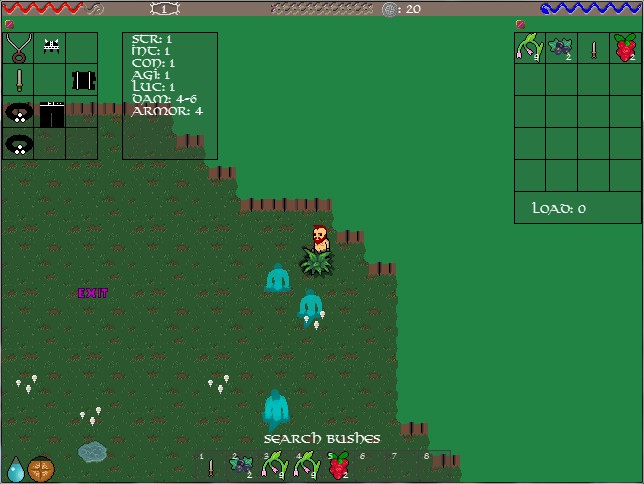 So there still isn't too much to look at but the core engine is almost 100% done. You will also notice a lot new things compared to Remnants fragments of the past. This was supposed to be a new engine for remnants but its now forming to its own game.

As you can see most of the graphics are place holders, most of the stats, skills etc are missing so this will still take some time to be finished. Thou you can see thirst and hunger icons as well as more inventory space, inventory load, a lot better quickslots and more of them. Also character appearances can now be customized. ( also the dude is hiding in the bush as I haven't made any armor graphics yet )

I hope you liked it I will post something new once I get it further. Please leave a comment =)

No comments make me a sad Panda =(

Decided to do a huge engine modification and the process will take time.

Work on this starting again. Came back from my holiday =)

Remnants Alpha test version 2 released. Download from the lin below.

Decided to show you guys some images of the games weapons, items. etc... This item set is from the time before I started making this game and I was just...

Bought game maker studio and have done some work with the new engine. Atleast the lighting should now be far better as well as the shadows and physics. Will post some photos once it looks a bit better then black, grey and different colored dots =D

Wow, this game is looking better and better all of the time!
Can't wait for the rogue mode and other new features!

Thanks =)
Im trying my best. Lately updates has been a bit slow (no updates every day) due school and work but summerbreak starts day after tomorrow. Saddly thou good for you guys I didnt get a summer jobb so Ill be spending a lot of time making this game.

This is pretty huge, looking very nice, 2d games with lots of content are awesome especially if they are a dungeon crawler with a open world to explore also.

Thanks for commenting =)
Im really trying to make a game for the players and I consider everything I get as feedback and try to improve it.

Oh and it seems you are a castlevania fan alucard as avatar. Im making a remake of simons quest too.

seriously? I always wanted to play that game. I'm sure you'll do a good job. How do I find out when it comes out?

Yes =) I will post the game here at some point it's engine is completely ready and I ripped most of the graphics from modern Castlevania games to keep it up to date and I drawed other graphic. Most of the areas are yet unfinished thou.
Oh and I fixed all the buggs from the original Simons quest game and modified the annoyances like dying in water at cities and most of the hints missing or translated wrong.
Many new things were added too but I wont reveal them yet =)

The camera angle remembers me a bit about Grand Theft Auto 1 PC game; you got a pretty huge list of interactivity for you game, which is something I do enjoy a lot(RPG fan here); hope I can achieve at least part of that interactivity at my game project. I'm feeling really tempted to try a demo of your game as soon as it appears to see some of the land of Ashdeen and their inhabitants.

Thanks for you comment. Im trying to release alpha test version2 at the end of this month. In alpha test version 1 there are few music reletad bugs that may crash the game but they are all fixed for the version 2. Perks should also atleast work for few levels in the version2.
I just managed to make Rogue game mode to work. The game mode allows you to play the game as a normal rogue like but offcourse fitted in to my engine.

Thanks and I hope you enjoy it even thou it is still alpha and contains a lot of wird buggs and missing content.

Indie
Tags
Embed Buttons
Link to Remnants: Fragments Of The Past by selecting a button and using the embed code provided more...