This is a tale about pain, suffering, and vengeance; about hope, compassion, and mercy.

Inspired by the Red Ridding Hood's tale, Redd's Runaway is a run and gun action game, combining a frenetic playstyle with an aesthetic reminiscent of the traditions of Halloween and the Day of the Dead, in a short experience aiming for a great replayability. 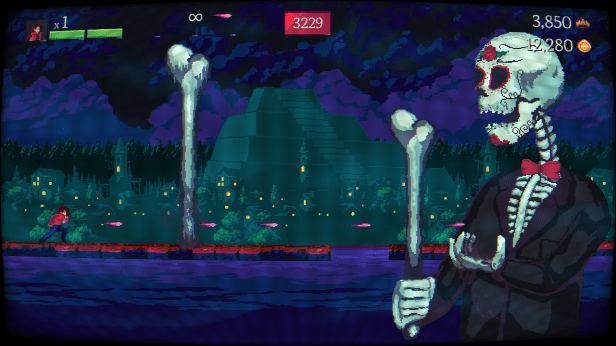 Redd was an orphan adopted by a master sorceress when she was just a baby. She has learned a few spells specialized in offensive tactics, to protect other people from supernatural menaces. She believes that life, as is, is chaotic enough, and is willing to help others in need against the creatures of the Underworld. After joining the Legion of Sorcerers in her adulthood and starting her training, tragedy struck her life when an unknown attacker killed her mother. With a scar as a reminder of the event, Redd suffered a deep trauma, which left her confused and depressed, pushing away her best friends and teammates.

When Brock City is under invasion, she will use everything she learned to fight along the Legion and defend the innocent, learning new spells in her way to stop this nightmare. But this event may put her abilities and strength at test until its last consequences: moreso, her true believings.

Join Redd's journey to stop this supernatural invasion and the mind behind this nightmare.

To promote Redd's Runaway and grow its popularity (top games), use the embed code provided on your homepage, blog, forums and elsewhere you desire. Or try our widget.

A run and gun game inspired by the mythos of the Halloween and the Day of the Dead. Can you stop the Underworld's invasion?

Burn It Down - an unusual puzzle-platformer. It is no jumping in the usual sense platformer. Jump character or not depends on the speed. Run ahead or...

The Nightmare from Beyond

The Nightmare from Beyond is a cosmic-horror third person platformer inspired by the works of H. P. Lovecraft (think "Tomb Raider meets cosmic horror...

The world has ended. There is no hope. No new beginning. Only the survivors. DEADLIGHT follows the journey of Randall Wayne, a man searching for his family...

Explore the mysterious world of Dogolrax! (Right now, since we have a DEMO-see below!) You awake on an unknown planet with amnesia. What are those horrific...

Kill as much as you can using explosives, weapons with different effects, qualities and drawbacks Rescue hostages, build buildings, defenses and turrets...