Project FPTD is a first person tower defense game, in addition to the classic tower building you are actively participating in the battle. Alien microbes from the planet Atom have invaded the Earth and, by infecting domestic animals, they plan to bring it down to its knees. Our scientists are working hard on making the anti-bodies, but infected animals are attacking their labs. Head scientist professor Klang hired mercenaries to defend them. They call themselves "Protector" and you are Jack Armstrong their leader. It is up to you to set up the defenses and bring waste to these evil doers. Features: - FPS and Strategy build modes. - Various towers to build and upgrade. - Shop in which you can buy new weapons and upgrades. - Manual tower tower control. - Customizable tower targeting system. - Diverse types of infected animals - normal, unique and aggressive. - Challenging action packed waves

At long last v0.3 is out! Though only in beta stage it has some cool stuff to show off. In addition to features mentioned in the previous article v0.3 Beta includes features like: unlocked fps mode between waves, camera interpolation, customizable tower targeting system aka tactics, radar, creeps with special abilities, hunter creeps that only attack you (yes you can die)...

Posted by HellEntertainment on Jun 22nd, 2011

At long last v0.3 is out! Though only in beta stage it has some cool stuff to show off. In addition to features mentioned in the previous article v0.3 Beta includes some new features:

1. Unlocked FPS mode between waves & camera interpolation
From now on there are no mode restrictions, you can be in FPS and Strategy mode at any time, though buying from Strategy mode is only available between waves. Also camera interpolates between modes nicely and it also works for tower controlling and zooming (zooming interpolation was not implemented during the recording of this video).

2. Tower Tactics
This allows you to change the towers targeting system to your liking. You can easily optimize towers behavior and assign them with specific tasks (a gatling tower that drops everyone's health to half, leaving the rest of the job to cannon tower etc.). All is explained in this video:


3. Radar
I've implemented the radar which will show you all units of importance on the map. Of course it doesn't work like minimap so the units out of range are shown on the edge of radar. Useful for knowing where those annoying chickens ran off... 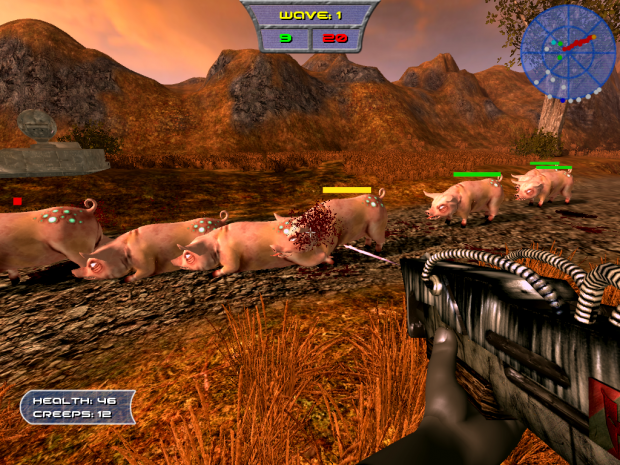 4. Creeps with special abilities
You will not encounter much of them, in fact there is currently only two of them:
* Pig Tank - has the force field around him which reduces all damage by 40%.
* Rooster Shaman - has the heal field around him restoring 12hp each second.

5. Death & Hunters
Hunters are special type of creeps, infested with mutated viruses which are undetectable by towers, with only one goal: to kill you. They are excellent at drawing your attention from normal creeps, because if you die you are respawned after 10 seconds, and time is precious. They will continue to hunt you until they are dead. Oh yeah, your towers can hurt you too if you are not careful enough. 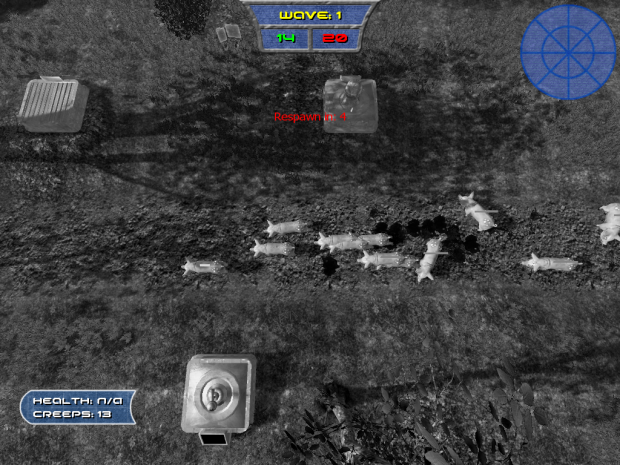 Well that sums it up! There are still some thing to be added like: proper balancing, weapon upgrades, more special abilities for creeps, traps/mines, tutorial, bug fixing etc. but that can take some time so better to release some form of beta version than get dragged like Duke. I'm still working alone so modelling & sound help would be very appreciated.

You can download v0.3 Beta from here.
Due to engine software bug some dlls were not included so you can download the patch from here and here. Just extract it to the game folder.

I eagerly await your feedback :)
Cheers.

Looks cool, pigs are fun :D keep it up!

For now, multiplayer will be added in later versions.